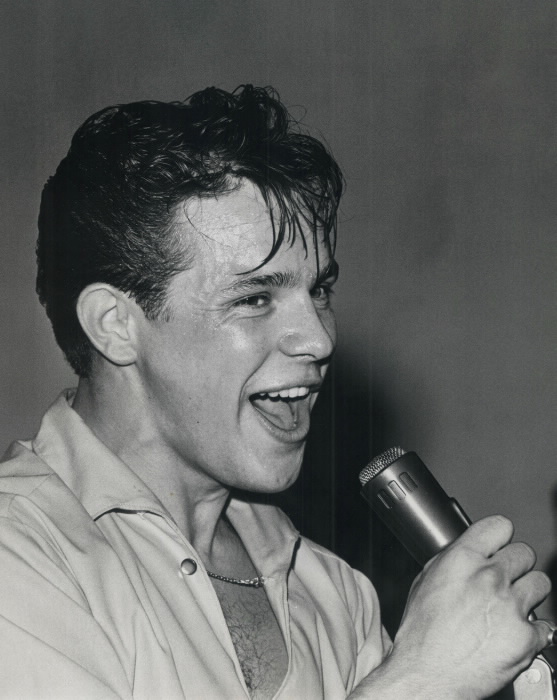 Bobby set out on his first Western Canadian Tour in the fall of 1960. From there Curtola went on to become a trailblazer. He toured the first coast to coast tour circuit in Canada. In 1961 he went to Nashville to record with Bill Porter for RCA Studios. That relationship continued for decades. “Don’t You Sweetheart Me” was his first Top Ten hit in Canada. The song climbed to #1 in Winnipeg, #4 in Vancouver and #5 in Toronto. He had another hit on his hands five months later with “Hitchhiker“.

Between 1960 and 1968 Curtola had continual single and album releases on the Tartan label in Canada. The managers and main songwriters were brothers Dyer and Basil Hurdon. The Del-Fi label released some of those singles in the US. His biggest hit, “Fortune Teller”, was released in 1962 and went Gold in Canada. The now Rock n’ Roll Hall of Fame DJ, Red Robinson, was key in the success of “Fortune Teller.” Seeing its potential internationally, Robinson sent it to Disc Jockey’s in Seattle at KJR and Hawaii’s KPOI in Honolulu. A major US record deal was signed and “Fortune Teller” went on to sell two and a half million copies. Bobby Curtola was invited to tour with Dick Clark and his Cavalcade of Stars. Curtola also enjoyed other Top 20 hit in ’62 in Vancouver with “You Must Belong To Me” and “I Cry And Cry“.

In 1963, Bobby Curtola had five songs climb into the Top Ten on CFUN in Vancouver. These were “Destination Love,” “Gypsy Heart“, “Indian Giver,” “Three Rows Over” and “Move Over”. “Move Over” was his ninth and last Top Ten hit in Vancouver.

Move over and let me into that dream,
move over, I’ve gotta get into that dream.
I saw you walking down the street,
I knew right there that we had to meet.
To be alone and have the right,
to kiss you and squeeze you and hold you tight.

I saw you walking down the street,
I knew right there that we had to meet.
To be alone and have the right,
to kiss you and squeeze you and hold you tight.

“Move Over” was the fourth single release credited to Bobby Curtola & The Martells. The first being “Gypsy Heart”. The Martells were a group originally formed in 1957 in Midland, Ontario. They started out as The Corvettes. The group consisted of drummer and guitarist Tom Ambeau, bass guitarist Milt Budarick, pianist Bert DesRochers, lead guitarist and backing vocalist Larry French, and lead vocalist and second drummer Gary French. They originally formed while attending Midland-Penetang District High School. They were the backing band for Canada’s first teen idol Bobby Curtola as he toured the university circuit and changed their name to The Martells (after Curtola’s booking agent, Maria Martel). After leaving Curtola, the Martells toured across Canada and recorded with stars as Del Shannon, The Stampeders and Chuck Berry, disbanding in the late 1960s. In 1979, the Martells reunited and continued playing together until disbanding in 2015.

In “Move Over” the guy in the song sees someone walking down the street and has an immediate physical reaction filling him with desire. He wants to meet them, go somewhere they can be alone and make out. In that instant of seeing this approaching pedestrian, the guy is ready to promise them all his love and make their “every wish come true.”

In June of 1964, Bobby Curtola got to sing what would become an ear-worm for radio listeners across all radio and TV stations in the mid-sixties. He became the first pop singer to record a jingle that sounded like a Top 40 Hit Single. The jingle was “Things Go Better with Coke.” He signed an exclusive contract with Coca-Cola to be their #1 Spokesman. Bobby, also co-wrote “The Real Thing” which was used for the commercial “Coke’s The Real Thing.” After turning twenty-one, Bobby was interviewed by John Pozer on his TV show in Ottawa, Saturday Date, which ended with the pair toasting to his success with coke bottles. In the interview Curtola reveals that the jingle was made in Nashville and that Elvis’ former backup group, The Jordanaires, backed Curtola in recording the commercial. Bobby Curtola went on in 1965 to host The After Four Show in Toronto.