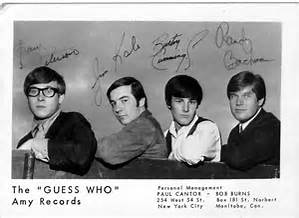 Originally there was a band in Winnipeg called Al & The Silvertones. The band had some lineup changes and became Chad Allen & The Expressions. In time they changed their name again to The Guess Who ?, with a question mark at the end of their name. They had a hit in Canada in 1965 called “Shakin’ All Over”, a cover version of the original by the UK’s Johnny Kidd And The Pirates in 1960. The Guess Who?’s version became a Top 30 hit in the USA. The Guess Who? tried to tour in the UK themselves in 1967 to support their single, “His Girl.” However, they didn’t have the proper documentation to perform, and “His Girl” only ended up spending one week on the British singles charts.

In the fall of 1967 The Guess Who were hired as the house band for The Swingers, a local CBC radio show in Winnipeg. They also were hired as the house band for the TV show Let’s Go, also on the Canadian Broadcasting Corporation. That show was hosted by their former band-mate, Chad Allan. The group got exposure on the 39 weeks the show aired in both seasons (1967-68 and 1968-69). They performed hits on the Canadian charts like “Touch Me” by The Doors, “Time of the Season” by The Zombies, “You Keep Me Hanging On” by Vanilla Fudge, “White Room” by Cream and “Along Comes Mary” by The Association. They also were able to debut some of their own compositions including “These Eyes,” “No Time” and several of their early minor hits that included “This Time Long Ago” and “Believe Me“.

(Let’s Go also had separate west coast show out of Vancouver. It was variously hosted by Terry Jacks, Tom Northcott, Mike Campbell and Howie Vickers, and featured appearances by The Seeds of Time, The Shockers, The Northwest Company, The Poppy Family and international stars like Eric Burdon & The Animals).

The Guess Who at this time consisted of Burton Cummings (keyboards, guitar, piano) Randy Bachman (guitar), Jim Kale (bass) and Garry Peterson (drums). While the Guess Who were performing weekly on Let’s Go they were approached by Jack Richardson, a record producer working at his own record company Nimbus 9. He pitched to the band an idea to join him in advertising recording effort for Coca-Cola. What unfolded was an album called A Wild Pair. One side of the album featured The Guess Who while the other side were recordings of the Ottawa band, The Staccatos (who shortly afterwards renamed  themselves as The Five Man Electrical Band). The album was only available for purchase through mail-order for the price of 10 Coca Cola bottle cap liners and $1 for shipping. Randy Bachman of The Guess Who recalled years later that he thought A Wild Pair may have sold many copies, but as it was sold through this unorthodox mail-order scheme, it was not on the radar of those who certify record sales for albums.

Believing in The Guess Who, Richardson went into debt to help them record their first studio album in September 1968 called Wheatfield Soul. It was released in March 1969 along with the debut single from the album, “These Eyes”. Concurrently, The Guess Who recorded what was initially a non-album single, “Of A Dropping Pin.” The lyrics to “Of A Dropping Pin” offer a mix of riddles and philosophical questions. The song’s title is a riff on a saying in the English language: You could have heard a pin drop. That saying is something stated when describing a situation where there was complete silence in response to something. This is especially due to people’s surprise, discomfort or startled reaction to something that was said. An example of this is told in this anecdote found on a site with examples of the usage of the phrase: You could have heard a pin drop.

A U.S. Navy Admiral was attending a naval conference that included admirals from the U.S. , English, Canadian, Australian and French navies. At a cocktail reception, he found himself standing with a large group of Officers that included personnel from most of those countries. Everyone was chatting away in English as they sipped their drinks but a French admiral suddenly complained that, whereas Europeans learn many languages, Americans learn only English. He then asked, “Why is it that we always have to speak English in these conferences rather than speaking French?” Without hesitating, the American Admiral replied, “Maybe it’s because the Brit’s, Canadians, Aussie’s and Americans arranged it so you wouldn’t have to speak German.” You could have heard a pin drop. Sometimes the pin that drops is in response to a comment that is jarring, in bad taste, controversial or presses against some conventions in civil society.

Often our inner landscape surfaces silent thoughts that challenge or inform us about something. In the songs lyrics the singer notes that all the possessions we surround ourselves are only temporary: to think that you can take it with you. Suddenly, the proverbial pin drops and we comprehend the point we (or others) are making, and the wisdom behind the thought we are exploring.

“Of A Dropping Pin” was quickly picked up in October 1968 for airplay on CKRC in Winnipeg. However, in The Guess Who’s hometown the tune only peaked at #27. In Vancouver the song charted for eight weeks, rising to #15. The tune was afforded it best chart run in Fredericton, New Brunswick in June 1969 at #11. At CFNB “These Eyes” had charted to #2 in May, and the station decided to program “Of A Dropping Pin” as a follow up. Perhaps, “Of A Dropping Pin” may have had a stronger chart performance across Canada if the sequence of single releases had been programmed like they did on AM radio in Fredericton. In Lethbridge (AB) the song climbed to #20.

In 1969 the band played before one of the biggest crowds at the Seattle Pop Festival. Other headliners on stage at that event were Led Zeppelin, The Doors, The Byrds, The Burrito Brothers, Frank Zappa and The Mothers, Alice Cooper, Bo Didley, Chuck Berry, Ike and Tina, The Chicago Transit Authority. The Guess Who had a huge international successes into 1970 with “American Woman” topping the charts across North America. The band continued to have chart success with “Share The Land” internationally and with a string of Top Ten hits in Canada. Their fans were more loyal in Canada, as singles like “Heartbroken Bopper” and “Running Back To Saskatoon” faltered on the American pop charts.

Several albums in 1973 failed to deliver hoped for record sales. In 1974 The Guess Who pulled out of their slump with a Top Ten hit across the continent, “Clap For The Wolfman”, a tribute to the famed rock ‘n roll DJ. However, after their album, Road Food, the band went back into a slump with fans taking a pass on further album releases into 1975-76. Meanwhile, The Guess Who officially split up in October 1975.