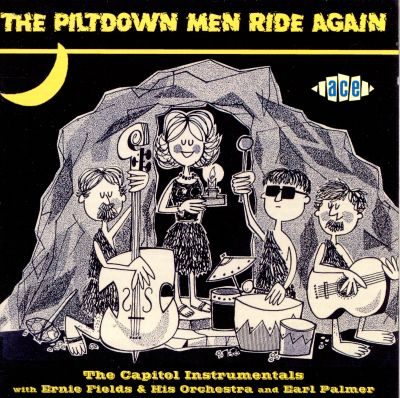 Ed Cobb of the Four Preps co-founded the Piltdown Men with Lincoln Mayorga, who was an arranger with the Four Preps. Mayorga played on piano, Tommy Tedesco on six-string bass guitar, Bob Bain on guitar, Scott Gordon on saxophone, Alan Brenmanen on drums, and several other session musicians. The band released instrumentals. Edward “Ed” Cobb was born in 1938. In the Fall of 1954 Hollywood High School held an audition for their annual talent show. Thirty-five girls auditioned, but no boys. The next day the school bulletin pleaded for “any guys out there who can do anything.” Four boys in the school choir formed a quartet overnight and stepped into the crinoline void as The Four Preps. They included bass singer Ed Cobb. The Four Preps won the talent show hands down, after singing covers of songs by The Crew Cuts and The Four Lads. Signed with Capitol Records in 1956, the Four Preps connected with the record buying public in 1958 with two Top Ten hits: “26 Miles (Santa Catalina)” and “Big Man”.

Lincoln Mayorga was born in Los Angeles in 1937. During high school he trained as a classical pianist. He began working as arranger and accompanist to his high-school friends in the Four Preps, contributing one of the two piano parts on their 1958 hit “Big Man” and being known as “the fifth Prep”. The group’s producer, Lou Busch, helped Mayorga get an album titled The Ragtime Kid issued in 1958, which was released under the pseudonym Brooke Pemberton.

The Piltdown Men was a name taken from an 1912 archeological fraud called the Piltdown Man. Amateur archaeologist Charles Dawson (not Charles Darwin) claimed to have been given fragments of a skull by a workman at the Piltdown gravel pit and that the skull was the “missing link” between ape and humans. The skull consisted of an altered human jawbone, teeth from an orangutan and the cranium from a small human being. The forgery wasn’t disproven until 1953. And so, seven years after the Piltdown Man was in the newspaper headlines, the Piltdown Men began releasing instrumental singles.

Their first release was “Brontosaurus Stomp”, which peaked at #10 in Vancouver (BC) in October 1960, and #75 on the Billboard Hot 100. That the single got this much attention was due to the popularity of the new prime time cartoon on ABC called The Flintstones. The B-side was a rocking version of “Old Macdonald”, and given the title “MacDonald’s Cave”. The B-side climbed to #14 on the UK singles chart in September 1960.

The follow up single for the Piltdown Men was “Piltdown Rides Again”. “Piltdown Rides Again” was a rock and roll rendition of the William Tell Overture by Italian classical composer Gioachino Rossini (1792 – 1868). William Tell was an opera that premiered in 1829 and was the last of Rossini’s 39 operas. The overture is in four parts, each following without pause. The “William Tell Overture” was used as the theme for the ABC television series The Lone Ranger, which ran for eight seasons from 1949 to 1957. The series starred Clayton Moore as the Lone Ranger and Mohawk actor Jay Silverheels as Tonto. After the TV series ended the pair starred in the 1958 film The Lone Ranger and the Lost City of Gold. The Lone Ranger and the familiar theme song was still an ear worm for radio listeners in 1960. In addition, the William Tell Overture was featured in the 1935 Mickey Mouse animated short The Band Concert. Rossini’s classic was also featured in the 1948 Disney animated short Bugs Bunny Rides Again. The Piltdown Men’s “Piltdown Rides Again” peaked at #13 on CKWX in Vancouver (BC), #14 in Rochester (NY) and #19 in San Antonio (TX).

Next, the Piltdown Men released “Goodnight Mrs. Flintstone”. Hanna-Barbera had released a new cartoon on September 30, 1960, titled The Flintstones. Barbera and Hanna experimented with hillbillies (a hillbilly theme was later incorporated into two Flintstones episodes, “The Bedrock Hillbillies” and “The Hatrocks and the Gruesomes”), Romans (Hanna-Barbera eventually created The Roman Holidays), pilgrims, and American Indians as the settings for the two families before deciding on the Stone Age. According to Barbera, they settled on that because “you could take anything that was current, and convert it to stone-age”.

Under the working title The Flagstones, the family originally consisted of Fred, Wilma, and their son, Fred, Jr. A brief demonstration film was also created to sell the idea of a “modern stone-age family” to sponsors and the network. The show imitated and spoofed The Honeymooners, although the early voice characterization for Barney was that of Lou Costello. William Hanna conceded that “At that time, The Honeymooners was the most popular show on the air, and for my bill, it was the funniest show on the air. The characters, I thought, were terrific. Now, that influenced greatly what we did with The Flintstones … The Honeymooners was there, and we used that as a kind of basis for the concept.”  Jackie Gleason, creator of The Honeymooners, considered suing Hanna-Barbera Productions, but decided that he did not want to be known as “the guy who yanked Fred Flintstone off the air.”

The Flintstones aired on ABC in the 8:30 p.m. to 9:00 p.m. time slot, and ranked at #18 by Nielsen for TV programs in the 1960-61 season Although it was a cartoon, the dialogue was pitched as a comedy for adults to enjoy, as well as their children. However, the popularity of The Flintstones didn’t translate into any notable sales for “Goodnight Mrs. Flintstone” in North America. However, the Piltdown Men’s ode to Wilma in the prehistoric town of Bedrock caught on in the UK. The single climbed to #18 in March 1961.

In 1961 Mayorga and Cobb formed a five-man band named the Link Eddy Combo (the name taken from their names Lincoln and Ed). Their instrumental, “Big Mr. C”, was the first single released on Frank Sinatra’s Reprise label in 1961, and reached # 28 on the Billboard R&B charts.

The Piltdown Men released three more singles, including “Fosil Rock” and “Tequila Bossa Nova” before disbanding. The Piltdown Men as a musical project also suffered as Ed Cobb and Lincoln Mayorga had arranged and produced Ketty Lester’s (born Revoyda Frierson) hit record “Love Letters” in 1962. As Lester’s single climbed to #4 in the UK, #5 in the USA, #6 in New Zealand, #8 in Ireland and #10 in Australia, Cobb and Mayorga turned to other recording artists.

“Tequila Bossa Nova” was a cover of the number one instrumental, “Tequila”, by The Champs from 1958. The Champs had punctuated the instrumental with the word “tequila”. In the case of the Piltdown Men, they punctuated their cover with the phrase “tequila bossa nova.” Of note, the session musicians on “Tequila Bossa Nova” and the B-side “Night Surfin'” were Leon Russell and Champs guitarist and frontman Dave Burgess. The producer for the single was Nick Venet who had previously produced “When I Fall In Love” for the Lettermen, “You’re The Reason I’m Living” and “18 Yellow Roses” for Bobby Darin. He went on to produce “Surfin’ Safari” and “Surfin’ U.S.A.” for the Beach Boys.

After the Piltdown Men disbanded Lincoln Mayorga worked as a session musician. In 1964 he accompanied Gloria Jones on the original version of “Tainted Love”, later an international hit for Soft Cell in 1981-82. In 1966, Mayorga became the staff pianist for Walt Disney Studios, and contributed to the soundtracks of such movies as Chinatown, Pete’s Dragon, The Rose and Ragtime. He also worked on TV series including Bonanza, Dallas, Little House on the Prairie and Highway To Heaven.

Meanwhile, Ed Cobb wrote “Every Little Bit Hurts” for Brenda Holloway, a #13 hit on the Billboard Hot 100 in 1964. That same year, Ed Cobb composed “Tainted Love” which was recorded the following year by soul singer Gloria Jones, with little success. However, in 1981 synth-pop band Soft Cell covered the song and it became a number one hit in Vancouver (BC) and the #11 hit for the year 1982 on the Billboard Hot 100. Cobb also penned three songs for the Standells, “Dirty Water”, “Sometimes Good Guys Don’t Wear White” and “Why Pick On Me“.

At the end of the 60s, Ed Cobb left the music business to become a champion horse breeder. Cobb died in 1999 at the age of 61 of leukemia.