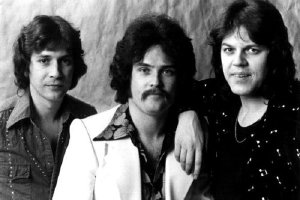 They were originally outfitted with cowboy hats, T-kay denim pants, shirts and jackets and cowboy boots. By the early 70’s the Stampeders kept only cowboy boots as mandatory attire. Their first single as a trio was called “Carry Me.” While the song got some air play in Vancouver, it did not chart here. However, it climbed to #2 nationally. Their cache only increased with the release of their debut album and a #1 hit across Canada called “Sweet City Woman.” It also made the Top Ten in the USA. The band won four Juno Awards for “Best Composer,” “Best Producer,” “Best Single” and “Best Vocal Instrumental Group.”

On the strength of their success, their UK label, EMI, sponsored a tour to the UK and continental Europe. While on tour in 1972 they found themselves booked at the same hotel in Amsterdam overlapping with The Eagles. Back in North America, The Stampeders flew to Los Angeles where they performed at the iconic Whisky A-Go-Go, and were guests on the TV shows Don Kirshner’s Rock Concert and The Dating Game. It was in Hollywood that the band met The Who’s drummer, Keith Moon, who invited them to attend his birthday party at the Beverly Hills’ Wiltshire Hotel. In addition The Stampeders toured extensively in the early 70’s and on either side of the Canada-U.S. border found themselves variously sharing the billing with Black Oak Arkansas, Santana, Joe Cocker, Steve Miller, The James Gang, Robin Trower, Steely Dan, Sonny & Cher, The Beach Boys, ZZ Top, The Eagles, Earth, Wind And Fire, Mountain, America, Tower Of Power, Blood, Sweat and Tears and Genesis. The Stampeders also traveled to Brazil to perform at a song festival in Rio in front of 90 million TV viewers.

Among the singles that charted well in Vancouver were “Monday Morning Choo Choo” and “Oh My Lady“.

Another release from The Stampeders third album, “Minstrel Gypsy”, made the Top Ten in many radio markets across Canada, but failed to chart in Vancouver. In 1975 the band released their fifth album featuring the rocker, “Ramona”. Another studio album followed with two covers. One was the old Ray Charles hit, “Hit The Road Jack”, while the other was a former hit for Gary U.S. Bonds, “New Orleans”. The former cover by The Stampeders featured the DJ of American Graffiti fame, Wolfman Jack. The single won The Stampeders another Juno.

But the days were numbered for The Stampeders as a hit-making machine. They had some modest success again in 1976 with several singles off their Hit The Road album. One of these was “Playin’ In The Band”. “Playin’ In The Band” is one of a number of songs by a rock n’ roll singers about the experience of touring and stardom. Bad Company had a song in the early seventies called “Shooting Star” about being a one-hit wonder. Grand Funk Railroad had a #1 hit in the 70s titled “We’re An American Band”. David Bowie had a song called “Ziggy Stardust” about his band, The Spiders from Mars. Dire Straits had a song in the early 80s called “Money For Nothing”. It is a song about being a rock star, from the point of view of a furniture mover who imagines musical stardom as the easy life. Joe Walsh had a hit called “Life’s Been Good”, which made fun of pop stars who live the fast life in a reckless way: “I have a mansion, forget the price/Ain’t never been there, they tell me it’s nice/I live in hotels, tear out the walls/I have accountants pay for it all.” Chuck Berry’s “Johnny Be Goode” is a song about being a rock ‘n roll star, as is “New Kid In Town” by The Eagles. Bob Dylan wrote about when your star has faded in “Like A Rolling Stone”.

Other examples are “Lodi” by Creedence Clearwater Revival, about a band stuck in a small town since it’s the only gig they can get. Simon and Garfunkel sang about life on the road in “Homeward Bound”. And Terry Jacks had a minor hit in Vancouver in 1975 about the effort many musicians make trying to get a big break. His song was titled “Rock ‘n Roll (I Gave You All The Best Years Of My Life)“. The Rolling Stones chimed in with “It’s Only Rock ‘n Roll (But I Like It)”. While The Byrds sang “So You Want To Be A Rock ‘n Roll Star”. Some of these songs are a reminder why you’d never want to be a rock ‘n roll star, while others make you want to step up to the microphone and follow your dream.

“Playin’ In The Band” peaked at #6 in Vancouver, #17 in Toronto and made the Top 30 in Ottawa. The song featured an excellent brass section arrangement that gave it an infectious Mexican vibe. As many Canadians snowbirds in the 70’s were discovering places like Puerto Vallarta, the riffs with the horns evoked a happy association for many radio listeners of past vacations.

After 1976, in most Canadian radio markets the Stampeders were off the radar. The disco onslaught on Top 40 AM radio was full on and the Stampeders weren’t doing disco. By degrees the band was breaking up as Rich Dodson left, followed by Kim Berly. They were replaced by numerous other musicians, with King the only original Stampeder. The larger line-up of Stampeders made the cost of touring unfeasible and the reformed band finally split up in 1980.

In March 2018, The Stampeders trio of King, Berly and Dodson began a tour with sixteen concert dates across British Columbia, Alberta and Saskatchewan. They have several more concerts scheduled into the summer in Alberta and Ontario.

References:
The Stampeders – About, Stampeders.net
Rich Dodson and Ronnie King, The Stampeders, Canadian Bands.com.
“Vancouver’s Official Music Survey,” CKLG 730 AM, Vancouver, BC, May 11, 1976.