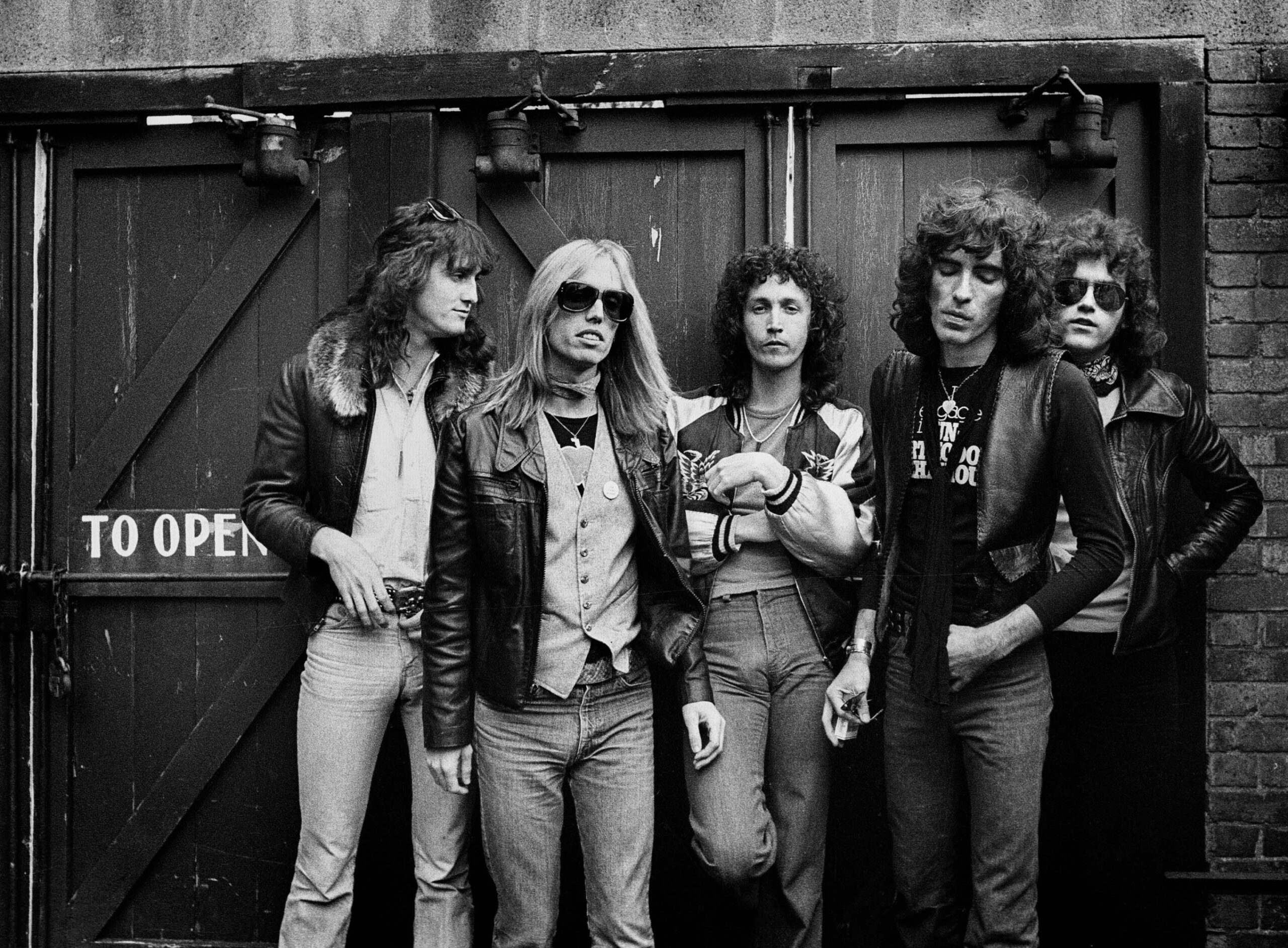 #168: Refugee by Tom Petty and the Heartbreakers

Thomas Earl Petty was born in 1950 in Gainesville, Florida. His father was a traveling salesman, and his mom worked at a tax office. While still ten years old, Tom Petty met Elvis Presley on the film set for Follow That Dream. But it was seeing the Beatles on TV in February 1964, that gave Tom Petty his inspiration. He recalls, “The minute I saw the Beatles on the Ed Sullivan Show—and it’s true of thousands of guys—there was the way out. There was the way to do it. You get your friends and you’re a self-contained unit. And you make the music. And it looked like so much fun. It was something I identified with. I had never been hugely into sports. … I had been a big fan of Elvis. But I really saw in the Beatles that here’s something I could do. I knew I could do it. It wasn’t long before there were groups springing up in garages all over the place.” He dropped out of high school at age 17 to play bass with his newly formed band.

Tom Petty first formed a band called the Epics, who by 1970 morphed into Mudcrutch. Among the bandmates were Mike Campbell and Benmont Tench. Michael Wayne Campbell was born in 1950 in Panama City, Florida. He grew up in Jacksonville, and got his first guitar at age 16. Campbell was strongly influences by Bob Dylan, the Byrds, Neil Young (of Crosby, Stills, Nash & Young), Carl Wilson (of the Beach Boys), Jerry Garcia (of the Grateful Dead), the Beatles’ George Harrison, Johnny Cash’s backing guitarist Luther Perkins, Elvis Presley’s backing guitarist Scotty Moore, the Rolling Stones’ Brian Jones and the Yardbirds/Led Zeppelin guitarist Jimmy Page.

Benjamin Montmorency “Benmont” Tench III was born in 1953 in Gainesville, Florida. He began taking piano lessons as a child, but switched from classical piano to pop music when he first heard the Beatles at the start of the British Invasion. Benmont Tench met Tom Petty at a music store at the age of eleven. Petty and Tench played together as members of The Sundowners in 1964. Tench joined Mudcrutch in 1972.

Ronald Edward Blair was born in 1948 in San Diego. Raised in a Navy family, Ron played in a rock band in Japan while his father was posted in that island nation. He joined Tom Petty and the Heartbreakers in 1976. Another member of the band was Cincinnati, Ohio, born Stan Lynch. He recalls, “As a kid I had very little opportunity. I was a marginal student. I wasn’t going to college. My parents didn’t have money. I played guitar and piano, and I always thought I was going to be a guitar player. The drums were sort of a happy accident. I didn’t really think that they would be my ticket out of the ghetto. Choosing to be a musician back then was not like choosing a job, but an entire lifestyle. My father looked at me as if I were going to wear a dress and dance in the circus.”

Stanley Joseph “Stan” Lynch was born in Cincinnati, Ohio, in 1955. His family moved to Gainesville, Florida, while he was a child. Lynch recalls, “As a kid I had very little opportunity. I was a marginal student. I wasn’t going to college. My parents didn’t have money. I played guitar and piano, and I always thought I was going to be a guitar player. The drums were sort of a happy accident. I didn’t really think that they would be my ticket out of the ghetto. Choosing to be a musician back then was not like choosing a job, but an entire lifestyle. My father looked at me as if I were going to wear a dress and dance in the circus.” In 1970, Lynch met Ron Blair and was a roadie for Blair. He moved to Los Angeles and met Ron Blair again at a recording studio in 1976.

In 1976, Tom Petty and the Heartbreakers released a self-titled album. A single, “Breakdown”, peaked at #40 on the Billboard Hot 100. The album eventually was certified gold. Their second studio album, You’re Gonna Get It!, peaked at #23 on the Billboard Top LPs & Tapes chart. On June 15, 1978, Tom Petty and the Heartbreakers made their first appearance in concert in Vancouver at the Commodore Ballroom on Granville Street.

But it was their third studio album, Damn the Torpedoes, that was a breakthrough album for the band. To support the album, Tom Petty and the Heartbreakers came back to Vancouver for a concert at the PNE Garden Auditorium on December 27, 1979. The album featured the lead single, “Don’t Do Me Like That”, which peaked at #1 in Vancouver for three weeks in late January 1980, and #10 on the Billboard Hot 100. A second single from the album was “Refugee”. 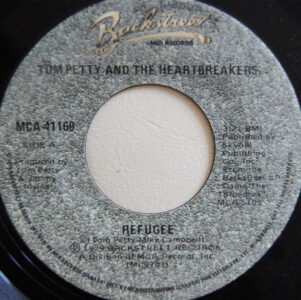 “Refugee” was cowritten by Tom Petty and Mike Campbell. Recalling the composition, Campbell stated “I just wrote the music and handed it to Tom [Petty] and he put the words over it, and when he did he found a way to make the chorus lift up without changing chords….We just had a hard time getting the feel right. We must have recorded that 100 times. I remember being so frustrated with it one day that – I think this is the only time I ever did this – I just left the studio and went out of town for two days. I just couldn’t take the pressure anymore, but then I came back and when we regrouped we were actually able to get it down on tape.”

Tom Petty said of this song: “This was a reaction to the pressures of the music business. I wound up in a huge row with the record company when ABC Records tried to sell our contract to MCA Records without us knowing about it, despite a clause in our contract that said they didn’t have the right to do that. I was so angry with the whole system that I think that had a lot to do with the tone of the Damn the Torpedoes album. I was in this defiant mood. I wasn’t so conscious of it then, but I can look back and see what was happening. I find that’s true a lot. It takes some time usually before you fully understand what’s going on in a song – or maybe what led up to it.”

Lyrically, the song describes a romantic relationship where one of the partners is given a candid assessment that they “don’t have to live like a refugee” and “revel in your abandon.” The partner has spent enough time with their lover who is living like a refugee to conclude “Somewhere, somehow, somebody must have kicked you around some. Who knows maybe you were kidnapped, tied up, taken away and held for ransom.”

For some radio listeners, “Refugee” may have been taken literally, or caused them to think about news headlines in 1979 into 1980. On December 25, 1979, the Soviet Union invaded Afghanistan. The invasion was a catalyst for a stream of refugees. Amnesty International reported that “By the end of 1980, there were more than four million Afghan refugees in Pakistan. Over the next four years, that number grew further still, with more than five million refugees in Pakistan and Iran.”

A refugee is a person who flees his or her home country because of fears of persecution or abuse, particularly by their own government. Refugees are people who have been forced to leave their country and who are afraid to return because of war, violence or persecution based on race, religion, nationality, political opinion or membership in a particular social group.

At the end of the Vietnam War in 1975 was a catalyst for a mass exodus of the new Communist government and over 3 million “boat people.” American President Jimmy Carter increased the number of refugees being admitted to the United States from 7,000 per month to 14,000 per month. In June 1979, over 56,000 boat people arrived on foreign shores that month alone. Western nations agreed to accept 260,000 boat people per year. America had attacked Vietnam in 1965 after the false flag Gulf of Tonkin incident resulted in President Lyndon Johnson escalating war in Vietnam. America conducted the “Secret War” in Laos from 1964-74, dropping more bombs per square mile in the nation than anywhere in Europe during World War II. As well, President Richard Nixon expanded the war in Indo-China into Cambodia. In the ensuing years America received 883,317 Vietnamese, 251,334 Laotians, and 152,748 Cambodians. While Canada welcomed about 200,000 refugees from Indo-China. 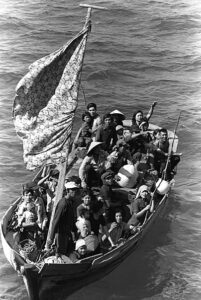 No matter the focus on an individual in a relationship who doesn’t need to live like a refugee, the song title evoked images from the TV news – and underscored how “everybody’s got to fight to be free.”

Growing up in Canada, there were plenty of stories of people coming to Canada who were refugees. After World War II, between 1945 and 1952, 35,000 to 40,000 Ukrainians settled in Canada. In 1956-57, over 35,000 refugees came to Canada after the Hungarian Revolution. And in response to Soviet tanks arriving in Prague in the spring of 1968, almost 12,000 Czechoslovakian refugees came to Canada by the end of 1969. Between 1973 and 1978, nearly 13,000 Chileans fled to Canada to escape persecution and the authoritarian rule of General Pinochet. As well, thousands of refugees came to Canada from Bangladesh due to the Bangladesh Liberation War of 1971-75. This continued into the mid-1980s.

A fourth studio album, Hard Promises, was released in 1981. During the recording of the album, John Lennon was scheduled to be in the same studio at the same time. Petty was looking forward to meeting him when he came in. The meeting never occurred, as Lennon was murdered in the archway of The Dakota on December 8, 1980, a half block from Central Park in New York City, before the date of his planned visit to the studio. Petty and the band paid tribute to the slain former Beatle by etching “WE LOVE YOU J.L.” in the runout deadwax on early U.S. and Canadian pressings of Hard Promises. The debut single from the album was titled “The Waiting”.

In January 1983, Tom Petty and The Heartbreakers scored another Top Ten hit in Vancouver with “You Got Lucky”. Peaking at #4 on the west coast, the single stalled on the Billboard Hot 100 at #20. A followup single, “Change Of Heart”, charted into the Top 30 in the USA, and #14 in Toronto on CHUM-AM.

The 1985 studio album release, Southern Accents, featured the single “Don’t Come Around Here No More”, which peaked at #29 on the CKLG chart in Vancouver. In 1986 the band released Pack Up the Plantation Live!  A 1987 studio album, Let Me Up (I’ve Had Enough), featured the Top 30 hit single “Jammin’ Me”.

In the spring of 1988, Tom Petty, George Harrison, Bob Dylan, Roy Orbison and Jeff Lynne (of Electric Light Orchestra) spontaneously formed the Traveling Wilburys. They recorded and subsequently released a single titled “Handle With Care“. It peaked at #9 in Vancouver (BC) in April 1989. Roy Orbison died in 1990.

The 1989 release of Full Moon Fever featured the hit singles “I Won’t Back Down” and “Free Fallin'”.

In 1991 the band released Into the Great Wide Open. The lead single, “Learning To Fly”, stalled at #28 on the Billboard Hot 100, but climbed to #3 in Hamilton (ON). On November 18, 1991, Tom Petty and the Heartbreakers appeared in concert at the Pacific Coliseum in Vancouver.

A final Top 40 hit for the band in 1994, “You Don’t Know How It Feels”, climbed to #3 on the RPM Canadian Singles chart, and #13 on the Billboard Hot 100. On May 6, 1995, Tom Petty and the Heartbreakers appeared in concert at the Pacific Coliseum in Vancouver.

On September 2, 1999, Tom Petty and the Heartbreakers gave a concert at General Motors Place in Vancouver.

On June 8, 2010, the band returned to Vancouver to appear in concert at General Motors Place. Tom Petty and the Heartbreakers performed their final two concerts in Vancouver, both at Rogers Arena, on August 14, 2014, and three years later on August 17, 2017.