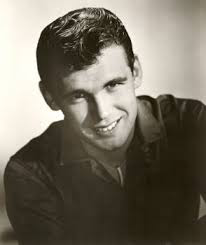 Duane Eddy was born in Corning, New York, in 1938. When he turned five years old he started to play guitar. His family moved to Arizona and in 1954, at the age of 16, Eddy got a Chet Atkins Gretch guitar. In 1954, at Coolidge High School Duane met Jimmy Delbridge who shared his love of music. Both boys played guitar and sang. In short order they were appearing on local radio in Coolidge, KCKY, as Jimmy and Duane. Jimmy sang best and Duane was a superior guitar player. Duane persuaded Jimmy leave the guitar behind and play piano. During 1955 local Phoenix disc jockey Lee Hazlewood was informally managing the duo. In June ’55 Hazlewood drove Eddy and Jimmy Dell (as he was now known) to Ramsey Recording Studio in Phoenix. In the studio the duo recorded the first of Hazelwood’s songs, “Soda Fountain Girl” and “I Want Some Lovin’ Baby”. These were old hillbilly tunes  backed by Buddy Long & the Western Melody Boys.

In February 1956, Jimmy and Duane appeared on The Arizona Hayride on KRUX in Glendale, Arizona. Duane Eddy and Lee Hazlewood became acquainted on the Arizona Hayride with Al Casey and his guitar-playing wife Vivian (professionally known as Corki Casey), drummer Connie Conway and jack-of-all trades Donnie Owens. At the time Jimmy Dell was getting cold feet about playing rock ‘n roll because of religious objections. Duane Eddy tired of Dell’s scruples and went ahead with his blossoming career. In 1957 he recorded “Ramrod” which was credited to Duane Eddy and His Rock-A-Billies. The single got little notice.

Eddy released his first album, Have ‘Twangy’ Guitar Will Travel on January 9, 1958. It is a mix of early rock & roll, swing, country and blues, and contains several covers as well as original compositions. He and the band known as The Rebels, Al Casey on rhythm guitar, his wife Corki Casey also on rhythm guitar, Steve Douglas on sax, Buddy Wheeler on bass and both Mike Bermani and Bob Taylor on drums; who along with several guest musicians were joined by The Sharps (later known as The Rivingtons), who contributed non-lyrical vocals, whoops and hollers. The album spent 82 weeks on the Billboard album chart into 1960, peaking at #5. Duane Eddy was one of the first rock ‘n roll recording artists to successfully chart an album into the Top Ten of the album charts.

His first single release from the album was “Movin’ and Groovin'”, a minor hit, which began with a riff the Beach Boys would borrow to open their 1962 hit “Surfin’ U.S.A.”. It was his next single release, “Rebel Rouser”, which put Duane Eddy on the map. The instrumental climbed to #6 on the Billboard Hot 100 in the summer of 1958, and #2 on CKWX in Vancouver (BC).

In 1960 he released “Because They’re Young”, the theme song for a film starring Dick Clark, Tuesday Weld, James Darren and Duane Eddy. The film about rebellious adolescents at the fictional Harrison High School, was based on the 1959 novel Harrison High by 22-year-old author John Farris. The film’s trailer had these words printed on the screen: “This is a topical picture, not a typical picture. Because They’re Young, Or Are They?”Then an announcer says “Because they’re young. Because they’re eager to live all of life’s fun, all at once. Are there some things a boy can never forgive his mother? The plot concerned a crusading high school teacher who tries to help his troubled students. “Because They’re Young” climbed to #2 in Vancouver (BC) and the UK, and #4 on the Billboard Hot 100.

Later in 1960 Duane Eddy released an instrumental single titled “Peter Gunn” which was a cover of the Henri Mancini TV show theme. Eddy’s version climbed to #6 on the UK singles chart. Next, Duane Eddy released “Pepe”, a cover of the theme song from the movie of the same name in 1960. His next single release was “Theme From Dixie”. This was followed by “Ring Of Fire”. Ring of Fire is an instrumental performed and written by Duane Eddy, accompanied by some background vocalists singing the phrase “ring of fire.” It was the theme song for the 1961 western movie of the same title. The well-known song, “Ring of Fire,” by Johnny Cash, is a different song. (In 1963, “Ring of Fire” by Johnny Cash was one of a dozen number one hits he had on the Billboard Country charts). Duane Eddy’s Ring of Fire barely made the Billboard Hot 100. The only radio market where the instrumental managed to reach the Top Ten in America was in the sister city of Vancouver, Washington, where it also peaked at #4.

The movie, Ring of Fire, concerned a hostage taking in the woods, an attempted murder, and a forest fire started by someone who tosses a cigarette in the woods. In the making of the movie there was footage of two actual fires used for the film. Lead star, David Janssen, was busy in Hollywood in 1961. Ring of Fire was one of five movies he starred in a leading role. Janssen, already known to TV audiences, starred as Richard Diamond in the popular private detective drama series for three seasons ending in 1960. He would go on to star in the TV show The Fugitive. Opposite Janssen was Joyce Taylor who had starred earlier that year in the science fiction film Atlantis, The Lost Continent. Taylor had been on contract with Howard Hughes RKO Pictures, and in 1960 did ads for do-it-yourself shuffleboard. The protagonist, played by Frank Gorshin, was known to audiences in episodes of The Untouchables, and movies like Where the Boys Are. Gorshin would go on to play the arch-villain, The Riddler, in the Batman TV series.

Over the years Duane Eddy has appeared as a session musician on recordings by Sanford Clark, Ray Sharpe, B.J. Thomas, Emmylou Harris, Phil Everly, The Ventures, Kenny Rogers, The Art of Noise and The Pretenders. Duane Eddy’s band, The Rebels, included saxophone players Steve Douglas and Jim Horn, and pianist Larry Knechtel. Douglas, Horn and Knetchel later became members of the Wrecking Crew of Phil Spector in the Sixties.

Larry Knechtel played on “Mr. Tambourine Man” for The Byrds; “Light My Fire” for The Doors; “Wouldn’t It Be Nice”, “Sloop John B” and “God Only Knows” for The Beach Boys; “Mrs. Robinson”, “A Hazy Shade Of Winter”, “At The Zoo”, “The Boxer”, Bridge Over Troubled Waters”, Cecelia” and “El Cóndor Pasa” for Simon & Garfunkel; “Dream A Little Dream Of Me” and “Twelve Thirty” for The Mamas and the Papas; “If I Can Dream” for Elvis Presley; and “Stoney End” for Barbra Streisand. He joined Bread in 1971 and was among the personnel for “Baby I’m-A Want You”, Everything I Own” and “Guitar Man”.

Jim Horn also was a session musician, along with Larry Knechtel, on the Pet Sounds album for The Beach Boys, especially “Good Vibrations”. Horn also featured on recordings of “Up, Up And Away” and “Aquarius/Let The Sunshine In” for the Fifth Dimension; “For All We Know” and “Rainy Days And Mondays” for The Carpenters; “Strangers In The Night” for Frank Sinatra; “River Deep – Mountain High” for Ike and Tina Turner; “Poor Side Of Town” for Johnny Rivers; “Light My Fire” for Jose Feliciano; “Creeque Alley” for The Mamas & the Papas; “Africa” and Rosanna” for Toto; “Got My Mind Set On You” for George Harrison, “You’ve Lost That Loving Feeling” for The Righteous Brothers, and many others.

Steve Douglas has been a session musician on four of Bob Dylan’s later albums, and the Pet Sounds album for The Beach Boys. Douglas also was a session musician for Mink Deville, The Ramones, The Crystals “He’s A Rebel” and others.

Duane Eddy was included on the Elvis Presley with The Royal Philharmonic Orchestra album, If I Can Dream that was released in 2015. The two tracks Duane Eddy was on are “Bridge Over Trouble Water” and “An American Trilogy”. For an 80th-birthday tour in 2018, Eddy returned to the UK in concerts on October 23 at the London Palladium, and October 30, 2018, at Bridgewater Hall in Manchester.

One response to “Ring Of Fire by Duane Eddy”