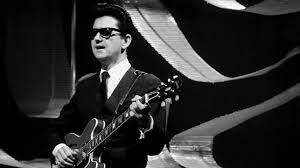 Roy Kelton Orbison was born in Vernon, Texas in 1936. When he turned six his dad gave him a guitar. Both his dad, Orbie Lee, and uncle Charlie Orbison, taught him how to play. Though his family moved to Forth Worth for work at a munitions factory, Roy was sent to live with his grandmother due to a polio outbreak in 1944. That year he wrote his first song “A Vow of Love.” The next year he won a contest on Vernon radio station KVWC and was offered his own radio show on Saturdays. After the war his family reunited and moved to Wink, Texas, where Roy formed his first band, in 1949, called The Wink Westerners.

From 1951 into the mid-50s The Wink Westerners appeared with Roy Orbison on KERB in Kermit, Texas. The band performed at school assemblies and country jamborees sponsored by KERB. In 1953 they played at an International Lions Club Convention in Chicago. After high school, Roy Orbison met two friends in college named Wade Lee Moore and Dick Penner. They’d written a song called “The Ooby Dooby.” The Wink Westerners began to include the song in their performances, including on a TV show on KMID in Midland, which won them a half hour Friday night slot on KMID.

Orbison had been approached by owners of Je-Wel Records who wanted The Teen Kings to make a record. The session took place in early March, 1956. This time, Roy and The Teen Kings, recorded The Clover’s “Trying to Get to You” and “Ooby Dooby.” The single was released March 19, 1956. That same day, Orbison took a copy to Cecil “Poppa” Hollifield in Odessa. He was a well-know record dealer in West Texas. “Poppa” Hollifield liked the record and played it on the phone to one of his connections in Memphis. The guy on the other side of the line asked him to send him a copy. His name was Sam Phillips, owner of Sun Records. A few days later “Poppa” telephoned Roy to say that Phillips wanted the Teen Kings in Memphis in three days to record for Sun Records. Roy Orbison and the Teen Kings arrived in Memphis on Monday, March 26, 1956. The next day they re-recorded “Ooby Dooby”. Bob Neal, owner of Starts Inc., signed the group to a booking and management contract. They kicked off with an experimental tour of Southern drive-in movies theaters, performing on the projection house roofs between film showings. Most of the time touring with Carl Perkins, Johnny Cash, Warren Smith, Sonny Burgess, Faron Young, Johnny Horton and then Jerry Lee Lewis and other Country and Rockabilly stars. “Ooby Dooby” peaked at #59 on the Billboard Hot 100 and #2 in Vancouver. However, follow-up singles failed to chart. The Teen Kings split up in December 1956 and Orbison stayed at Sun until 1958.

The hits kept on coming for Roy Orbison with “Crying”, “Dream Baby”, “In Dreams” and many other Top 40 singles. On October 27, 1963, Roy Orbison appeared for his first time in concert in Vancouver at the Queen Elizabeth Theatre. Roy Orbison was one of the few hit-makers to hold his ground, increasing his popularity despite the British Invasion. “It’s Over” went #1 in the UK and Ireland in the spring of 1964. His next single that year, “Oh Pretty Woman”, was his biggest all-time hit. “(Say) You’re My Girl” is a song about a woman who is adored by two best friends. The guy she’s been dating has been cheating on her. This, despite knowing his best friend is in love with his girlfriend. Finally, she dumps the guy who’s cheating on her and she’s finally consented to have a dance with the other guy, her ex-boyfriend’s best friend. The guy she’s dancing with has stars in his eyes and hopes that she’ll never let him go. The song was one of a genre of songs where two buddies both have the hots for the same woman. In this case they are both aware they are attracted to her. A song that resembled “(Say) You’re My Girl” is the Elvis Presley chart-topping hit from 1961, “(Marie’s The Name) His Latest Flame”. In the latter’s case the buddy has kept a secret to himself that he loves his buddy’s girlfriend and that she has recently been in his arms and has fallen in love with him.

The sub-genre which “(Say) You’re My Girl” is lodged is that of the love triangle. Love is often thought of as the domain of a pairing, a couple. Two’s company, three’s a crowd, goes the saying. However, sometimes a third person, a friend or another love interest, can be a catalyst for moving a couple closer together or split them apart. A friend may be the object of desire of one of the  parties in the couple, perhaps dissatisfied with communication or sex or power dynamics in the primary relationship. Or a friend who is close to the couple may harbor secret, or open, fondness for someone who is in a relationship. A bridegroom who wishes she was the bride, for example. The undercurrents of nonverbal and, sometimes, verbal communication can create dynamics that lead to a lot of drama. Sometimes a person who had grown bored with their relationship will have an affair to spice up the relationship or to have a reason to have an argument with their primary lover.

On November 28, 1965, Roy Orbison returned to the Queen Elizabeth Theatre.

In 1966, Orbison’s wife, Claudette, was killed in a motorcycle accident. In 1968, tragedy struck again when two of his three children died in a fire that burned down his house in Hendersonville, Tennessee.

A duet of “Crying” with k.d. Lang climbed to #2 nationally on the RPM Canadian singles chart, though only to #35 on CKLG in February 1988. Orbison won a Grammy Award for the duet. Next Orbison sang with George Harrison, Jeff Lynne, Tom Petty and Bob Dylan, in a group called the Traveling Wilburys. Their single, “Handle With Care”, climbed to #9 in Vancouver and #45 on the Billboard Hot 100. Roy Orbison died dead at 52 from a heart attack on December 6, 1988. In April, 1989, his posthumous single, “You Got It,” climbed to #6 on CKLG in Vancouver.

In January 2018 it was announced that Roy Orbison will be going on tour again, in hologram form.