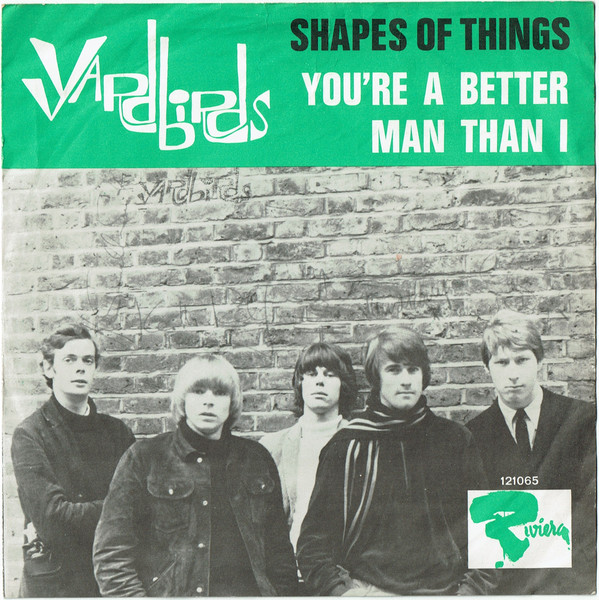 #238: Shapes Of Things by the Yardbirds

The Yardbirds are an English rock band that had a string of hits in the mid-1960s, including “For Your Love” and “Heart Full Of Soul.” The group is notable for having started the careers of three of rock’s most famous guitarists: Eric Clapton, Jeff Beck, and Jimmy Page. During their brief five years, from 1963 to 1968, they set the pace for a lot of the innovations to come in rock ‘n roll into the 1970’s. The Yardbirds experimental explorations also provided the crucial link between British R&B, Psychedelic Rock, and Heavy Metal, while pioneering the use of innovations like fuzz tone, feedback and distortion. With this fusion, and harmonica riffs, they inspired the musical styles of contemporary American bands like The Count Five who had a #1 hit in Vancouver in 1966 called “Psychotic Reaction.” When Jimmy Page left The Yardbirds to form the New Yardbirds, that band was quickly renamed Led Zeppelin.

Jim McCarty was born in Liverpool in 1943 and moved to London with his family at the age of two. He met Paul Samwell-Smith at school. Samwell-Smith, born in Greater London in 1943, was part of a band called the Metropolitan Blues Quartet with Keith Relf. Also born in London in 1943, Keith Relf wrote numbers of the Yardbirds most successful hits including “Shapes Of Things” and “Over, Under, Sideways, Down.” He also wrote “Dazed And Confused,” a song that was later recorded by Led Zeppelin. Chris Dreja was born in Greater London in 1945. By the age of 17, he joined the Yardbirds playing rhythm guitar and bass guitar.

In 1965 The Yardbirds had two Top Ten hits on the Billboard Hot 100, “For Your Love” and “Heart Full Of Soul”. The former peaked at #3 in Vancouver, but the latter stalled at #17. Their next single release, “I’m A Man”, reversed the chart success with the tune climbing to #2 in Vancouver, but stalling at #17 on the Hot 100.

Their followup hit in early 1966 was “Paff…Bum”, a #5 hit in Italy. Their subsequent release was “Shapes Of Things”. 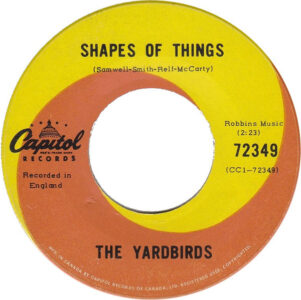 “Shapes Of Things” was cowritten by Jim McCarty, Paul Samwell-Smith and Keith Relf. McCarty recalls, “We were really coming from not trying to create a sort of a 3-minute piece of music, it was just something that seemed natural to us. We started with the rhythm, we used a bass riff that came from a jazz record, got a groove going with that and then added a few other bits from elsewhere, other ideas that we’d had. And I think it was a great success for us, it was a good hit record that wasn’t really selling out. And it was original.”

The lyrics were both pro-environmental: “now the trees are almost green, but will they still be seen;” And anti-war: “please don’t destroy these lands, don’t make them desert sands.” David French, a biographer for Keith Relf, wrote this about “Shapes Of Things”: The abstract-sounding lyrics that Keith and Samwell-Smith came up with about the “shapes of things before my eyes” provided a timely screen onto project all the meaning of the emerging Sixties drug culture and the political turmoil of the Vietnam era. They also reflect the authors’ own introverted natures and the earnest desire to improve both the world and themselves.

The lyrics contemplate a future, especially from a young man’s perspective (as the songwriters were all young men). “Come tomorrow, will I be older? Come tomorrow, may be a soldier? Come tomorrow, may I be bolder than today?” In a time of war, many young men were dying on the battlefield. So, getting to be older was clearly not in the cards – at least for 58,220 American soldiers who died in the Vietnam War. (And getting older was also not what the fates allowed for up to 3,800,000 Vietnamese, including military and civilian casualties in North Vietnam and South Vietnam. (And nearly 375,000 more died during the Secret War in Laos and Cambodian Civil War, which also involved additional American military losses.) During the draft, it was not an option to become a soldier. And for many in the new generation, being “bolder” meant burning draft cards, becoming a draft dodger and heading to Canada, or protesting the Vietnam War.

The lyrics in the song detail the struggle of a generation to make the world a better place, given the old solutions of warfare being handed down to them by their elders: “Soon I hope that I will find, thoughts deep within my mind, that won’t disgrace my kind.”

The feedback in the guitar solo by Jeff Beck in “Shapes Of Things” contributes to the song being regarded by music critics as the first psychedelic rock tune. The song has been described as “fuzz-drenched,” “explosively warped” and hailed for its “gigantic burst of feedback.”

The Yardbirds had another Top Ten hit in Vancouver with “Over Under Sideways Down” in July ’66, while it missed the Top Ten on the Hot 100 in the USA. Jeff Beck was fired from the band after this single release and replaced by Jimmy Page.

Harry Nilsson’s “Ten Little Indians” was recorded by The Yardbirds. It only reached #96 on the Billboard Hot 100. It did not chart in the UK. But in November 1967 it peaked at #7 in Vancouver. Yardbirds band members Chris Dreja and Jim McCarty do not appear on this track. Yardbirds guitarist and producer Jimmy Page invented the audio effect known as reverse echo while recording “Ten Little Indians”. The Yardbirds appeared in concert in Vancouver on November 10th and 11th, 1967, at the PNE Garden Auditorium.

The band released one more single, “Goodnight Sweet Josephine” which stalled at #127 below the Billboard Hot 100 in the spring of 1968.

The Yardbirds had one final tour to the USA in the spring of 1968 ending on June 5th. Then they split up. Jimmy Page went on to form Led Zeppelin. Jim McCarty and Keith Relf formed an acoustic group that lasted through ’til 1976 when Relf died from an electrical accident in his home recording studio.

Chris Dreja mostly pursued a career as a photographer over the next decade. After he left The Yardbirds, Eric Clapton formed the rock band Cream. From there he formed Blind Faith, and then joined Delaney, Bonnie and Friends. Clapton next formed Derek & The Dominos. From these successes, Clapton went on have a successful solo career including the release of 22 studio albums. Jeff Beck went solo after The Yardbirds and to date has released 17 studio albums.

Paul Samwell-Smith was the musical producer for the 1971 film Harold and Maude. And in 1990 he produced Postcards from the Edge.

On February 22, 2009, the Yardbirds featuring Chris Dreja performed in Vancouver at Richards’ On Richards.

In 2017, the Yardbirds played three concerts with Vanilla Fudge around Florida. In January 2019, the Yardbirds performed during the Concerts At The Sea eight-day cruise from Fort Lauderdale (FL) to the Bahamas, Virgin Islands and St. Maarten. And from April 2-5, 2019, the Yardbirds performed on the Flower Power Cruise. Other performers included the Beach Boys, Tommy James and the Shondells, Jefferson Starship, the Lovin’ Spoonful, Gary Puckett & The Union Gap, Melanie, the Box Tops, the Ides of March, Chuck Negron (of Three Dog Night).