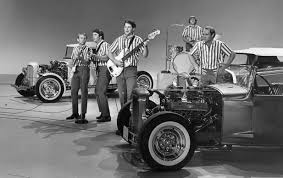 #609: She Knows Me Too Well/Wendy by The Beach Boys

Brian Wilson was born in Inglewood, California, in 1942. In biographer Peter Ames Carlin’s book, Catch a Wave: The Rise, Fall, and Redemption of the Beach Boys’ Brian Wilson, he relates that when Brian Wilson first heard George Gershwin’s “Rhapsody in Blue” it had a huge emotional impact on him. As a youngster, Wilson learned to play a toy accordion and sang in children’s choirs. In his teens he started a group with his cousin, Mike Love and his brother, Carl. His named the group Carl and the Passions in order to convince his brother to join. They had a performance at Hawthorne High School, where they attended. Among the people in the audience was Al Jardine, another classmate. Jardine was so impressed with the performance that he let the group know. Jardine would later be enlisted, along with Dennis Wilson to form the Pendletones in 1961. The first song Brian Wilson wrote would become “Surfer Girl.” A demo of the tune was made in February 1962 and would go on to be a Top Ten hit when it was released a year later in 1963. However, their first recording was a doo-wop-surf tune called “Surfin’” in October 1961. It was released in November ’61 on the Candix Enterprises Inc. label. The surprise for the group was that the record label had changed the group’s name from the Pendletones to the Beach Boys. Consequently, as each time the record was played by a DJ in America, radio listeners were being introduced to the Beach Boys. The name Pendletones was now history. “She Knows Me Too Well” is a song about a relationship where the woman in a man’s life knows him well enough to know not to look at other guys. Meanwhile, he looks at other women, hunching that for the woman in his life “it must kill her inside.” Just the same he keeps on looking. And he gets jealous of other guys and purposely makes her “break down and cry.” Once she’s in tears over his tone with her, he feels “happy.” We learn more about the narrator of the song when he confides, “I treat her so mean I don’t deserve what I have. And I think that she’ll forgive just by making her laugh.” Elsewhere we learn that he expects her to read his mind and “know what he’s thinking of.”

Chart positions on the C-FUNTASTIC FIFTY were based on both record sales and listener requests. Presumably, for the song to climb to #7 there must have been plenty of young women and young men phoning to request the C-FUN DJ’s to play “She Knows Me Too Well”. In addition to peaking at #7 in Vancouver, “She Knows Me Too Well” peaked at #2 in Sacramento (CA) and San Jose (CA), #3 in McAllen (TX), #5 in Pittsburg (CA) and San Fransisco, and #6 in San Bernardino (CA).

“She Knows Me Too Well” seems threateningly uncomfortable for a healthy relationship, certainly for anyone listening to the song in 2019. Perhaps in 1964 when Brian Wilson wrote this song he was trying to make a laundry list of a guys imperfections. Despite all the red flags about the guy described in the song, we learn that “she can tell I really love her.” The sweet harmonies in this song might make you think the guy really does love her. And maybe he does. However, saying ‘I love you’ can be used as a way to paper over serious problems with attitudes and behaviors that call into question what ‘I love you’ means. Most people in a relationship want to feel loved and respected in the course of daily living, not just when one partner says ‘I love you.’

In an article titled “10 Signs Your Relationship Is Sucking the Life Out Of You,” Jenn Scalia writes one of the warning signs is “When you wake up every morning, you don’t know which person you’re going to get — the loving, kind, beautiful person you fell in love with or the one who is irrational, mean and insecure.” For the guy in “She Knows Me Too Well” he is aware he treats the woman in his life “mean.” When he recognizes he’s being mean, he doesn’t apologize or sit down and ask her how she is and how she is feeling. Instead, he just tries to make her laugh, which is a distraction. After the laughter is over, she is likely trying to process his random acts of meanness.

Another warning sign is that you are crying on a daily basis. In the song it is made clear that while he can look at other girls, she’d be in trouble if she looked at other guys. And with a boyfriend (or husband) who so easily becomes jealous of other guys, her tears could be tears of anxiety due to his emotional insecurity.

The flip side to “She Knows Me Too Well” was a song titled “Wendy”. “Wendy” is a song about a relationship that is over. Wendy makes her boyfriend cry when she leaves him for “another guy.” Apparently, the other guy is a smooth talker, and the narrator pleads that with her to not “believe a word he says.” In an attempt to lure Wendy back to him, the ex-boyfriend says “I can’t picture you with him. His future looks awful dim.” But by the end of the song Wendy is not back in his arms again. He tells her “I wouldn’t hurt you like that,” in reference to her leaving him. However, by the end of the song all we know is that Wendy left him to be alone, and that she’s made it with this other guy. Whatever looks “awful dim” to the ex-boyfriend likely isn’t what Wendy sees in her new steady beau.

In 1965 the Beach Boys had hits with “Help Me Rhonda”, “The Warmth Of The Sun“, “California Girls” and “The Little Girl I Once Knew“. And on both January 29th and September 24th, 1965, the Beach Boys gave concerts in Vancouver at the PNE Forum. The group began 1966 with a #2 hit titled “Barbara Ann”, followed with “Sloop John B” and “You’re So Good To Me”, another double-sided hit that also peaked at #2.

They have had four singles – “Good Vibrations,” “California Girls,” “In My Room” and “I Get Around” – and one album, Pet Sounds, inducted into the Grammy Hall of Fame between 1994 and 2017. On August 2, 1993, the Beach Boys appeared in concert in the Vancouver suburb of Burnaby at Deer Lake Park. In 1997, Carl Wilson was diagnosed with lung and brain cancer. While on tour, and receiving chemotherapy, he sat on a stool while performing the Beach Boys hits. Carl Wilson died at the age of 51 in February 1998.

Between July 13, 2018, and September 6, 2019, The Beach Boys scheduled 80 concert dates across twenty-one states in the USA, as well as concert dates in Canada, the UK., Ireland, Germany, France, Belgium, Denmark, Czech Republic, Switzerland and Spain. Their most recent concert in Vancouver (BC) was on September 1, 2019.