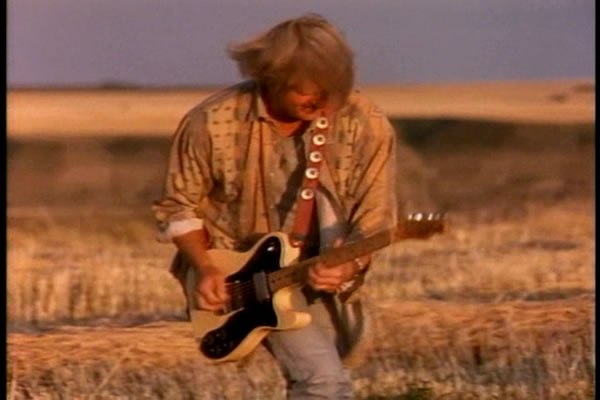 The band’s first single “White Hot” was a Top 20 hit across Canada, and climbed to #5 in Vancouver in April 1980. The single also climbed to #48 on the Billboard Hot 100. The single was from the debut album by Red Rider titled Don’t Fight It. Then on May 10, 1980, Red Rider appeared in concert at the Pacific Coliseum in Vancouver. A second album released in 1981 titled As Far As Siam expanded their fan base. And on September 5, 1981, Red Rider gave a concert at the Pacific Coliseum in Vancouver.

And in 1983 Red Rider’s third studio album, Neruda, featured the single “Human Race”. A fourth album, Breaking Curfew, didn’t sell very well. In 1986, they released the album, Tom Cochrane & Red Rider. One of the songs on the album was “Boy Inside The Man“. And later that year on October 23rd, the band performed in concert at Vancouver’s BC Place Stadium.

After “Big League”, Tom Cochrane went on to release a solo album in 1991 titled Mad Mad World. The studio recording featured Red Rider bandmates Spider Sinneave and John Webster. On the album was a single release titled “Life Is A Highway.” In early 1992 the single climbed to #1 in Canada and #6 on the Billboard Hot 100. The albums’ follow up singles were “No Regrets”, “Washed Away” and “Sinking Like Sunset”. 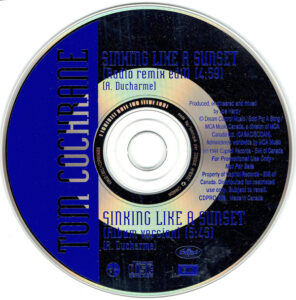 “Sinking Like A Sunset” was written by Annette Ducharme, a Franco-Ontarian born in Windsor. In addition to Tom Cochrane, Ducharme has written songs recorded by Lawrence Gowan, and the Paperboys. Between 1989 and 2019 she had released six studio albums.

“Sinking Like A Sunset” is a song about a couple in a relationship. The woman in the relationship is caught up in stories like that of Cinderella. Around the world there are over a thousand variations to the Cinderella story. One of the earliest from 7 BCE has a Greek slave girl, named Rhodopis, who marries the King of Egypt. The earliest version in Europe is from Italy in 1634 about a girl named Cenerentola. She often arises covered in ashes, giving rise to the mocking nickname. A common theme in the story is about a young girl who unexpectedly achieves recognition or success after a period of obscurity and neglect. While not all stories have a wicked stepmother (some stories have an oppressive stepfather), most do, as well as older sisters who force Cinderella to do chores while they lounge around. As well, while many Cinderella stories feature glass slippers as the key to her identity for the prince to learn who she is, other stories have instead either a ring, an anklet or a bracelet (sometimes gold).

Another story that fascinates the woman in the relationship in “Sinking Like A Sunset” is about Don Juan. First published in Spain in 1630, the story of Don Juan is about a wealthy libertine who devotes his life to seducing women. He takes great pride in his ability to seduce women of all ages and stations in life, and he often disguises himself and assumes other identities in order to seduce women. Don Juan’s life is also punctuated with violence and gambling, and in most versions he kills a man: Don Gonzalo, the father of Doña Ana, a girl he has seduced.

For the man in “Sinking Like A Sunset”, his female partner’s preoccupation with stories of a handsome prince who marries a simple commoner, or a wealthy man who is sexually unrestrained seducing countless women, is a distraction. He tries to tell her that “the true verse of life is written” “out on the streets.” In the song the guy thinks of himself as an “old sergeant” and she is an “angel.”

“Sinking Like A Sunset” climbed to #7 in Vancouver. It peaked nationally in Canada at #2 on the RPM Top 100 Hit Tracks chart.

Cochrane followed up with an album in 1995 titled Ragged Ass Road, named after a street in Yellowknife, Northwest Territories. It included the top ten hits on the Canadian RPM singles chart “I Wish You Well” (#1), “Wildest Dreams” (#5) and “Dreamer’s Dream” (#4).

On July 1 the band performed in concert in the Vancouver suburb of Surrey at Surrey Canada Day 2006. On February 18, 2008, Tom Cochrane & Red Rider gave a concert at the Pacific Coliseum in Vancouver.