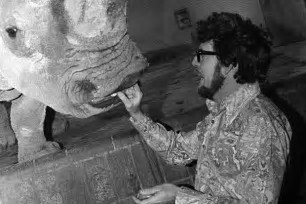 Rolf Harris was born in Western Australia in a small town near Perth in 1930. He moved to London, England, in 1952 and got work with the BBC the following year. He was featured in a children’s one-hour TV show called Jigsaw, offering a regular ten-minute cartoon drawing section with a puppet called “Fuzz” made and operated on the show by magician Robert Harbin. Harris went on to illustrate Harbin’s Paper Magic programme in 1956. In 1954, Harris was a regular on the BBC TV show, Whirligig, which featured a character called “Willoughby,” who came to life on a drawing board, but was erased at the end of each show. Concurrently, Harris performed his piano accordion at an expat club for Australians and New Zealanders in London called Down Under. While there Harris wrote his signature song “Tie Me Kangaroo Down Sport” which became a hit in Australia and New Zealand in 1960 and in North America in the summer of 1963.

In 1961 Harris recorded a Christmas-themed song about the need to replace reindeer with kangaroos for his sleigh ride to drop off presents to children in the heat of an Australian December. The song was titled “Six White Boomers”. Boomers were “old man kangaroos” and, according to Rolf Harris, the preferred method of getting around on a sleigh in Australia. Unlike in America, where December 24th can be a cold, event snowy event, Australia has cities with historical averages on December 24th of 96F. Rolf Harris’ tale is told in a straightforward way about a young kangaroo who wants to know where his mummy has gone. Santa lets young Joey kangaroo hop on his sleigh in order to help find his mum. At length, with the old man kangaroos pulling the sleigh, Joey spots his mum bounding up and down. They are reunited while Santa heads off with the boomers on his sleigh. The hitch is that this year Santa has already had his regular Australian run to deliver the toys on December 24th, and on Christmas Day takes an interest in Joey kangaroo’s plight to find his mummy. As a result Santa and the six white boomers do an extra Australian run just to find Joeys Mum.

It was only in 1959 that Quantas Airlines began flights from Sydney to New York. The expense and several stops between the Pacific coast of North America and Sydney meant few travelers in 1961, from Canada or America, had journeyed to the Land Down Under. So radio listeners were hearing a Christmas tale about a place most could only dream about someday visiting.

‘Twas The Night Before Christmas” is a poem first published in the Sentinel newspaper in Troy, New York, December 23, 1823. The poem was published anonymously and is thought by scholars to be owed to the Dutch Sinteklaes tradition in Manhattan. In 1809 Washington Irving had published a story titled A History of New York from the Beginning of the World to the end of the Dutch Dynasty under the pseudonym Deitrich Knickerbocker. In that story it was written: And the sage Oloffe dreamed a dream,‍—‌and lo, the good St. Nicholas came riding over the tops of the trees, in that self-same wagon wherein he brings his yearly presents to children….

By 1823 Christmas Day was overtaking New Year’s Day as the preferred genteel family holiday of the season, but according to Edwin G. Burrows and Mike Wallace in their book, A History of New York City to 1898, some Protestants viewed Christmas as the result of “Catholic ignorance and deception” and still had reservations. By having Saint Nicholas arrive the night before Christmas Day, the anonymous poem “deftly shifted the focus away from Christmas Day with its still-problematic religious associations.” As a result, “New Yorkers embraced Moore’s child-centered version of Christmas as if they had been doing it all their lives.” (The authorship of the poem is claimed to be either by the biblical scholar, Clement Clarke Moore or Major Henry Livingston Jr., with scholars lining up on either side of that controversy.)

Rolf Harris was not the only person living in Australia who noticed that there hadn’t been a snowflake seen for months down under. He penned his lyrics to “Six White Boomers” as a whimsical response to the Australian dilemma of imagining Santa Claus’ whirlwind stops across their continent in scorching heat.

In 1963 Rolf Harris was on the same billing for a Christmas show with the Beatles at London’s Finsbury Park Astoria which ran for 16 nights which featured the Beatles singing backing vocals on “Tie Me Kangaroo Down, Sport”. One of his most popular tunes was “Jake The Peg” with the suggestive lyric: “I’m Jake the Peg, diddle-iddle-iddle-um/With the extra leg… diddle-iddle-iddle-um,” in 1966. From 1967 to 1974 Harris was host on the BBC programme, The Rolf Harris Show. In 1969 his song, “Two Little Boys”, spent six weeks in the #1 position on the UK charts. Harris is credited with inventing a simple homemade instrument called the wobble board. As well as his beatboxing, Harris went on to use an array of unusual instruments in his music such as the Jew’s harp. He was among the very first to feature a didgeridoo on a pop recording. In 1971 Rolf Harris, who had visited Vancouver on numerous occasions wrote a song dedicated to the city called “Vancouver Town ’71“.

In 1993 Harris did a cover version of the Led Zeppelin song, “Stairway To Heaven”, which became a Top Ten hit for him in the UK. Between 1955 and 2012 Harris starred in five movies and appeared in eleven TV series. In 2005, Harris was commissioned to paint a portrait of Queen Elizabeth II for her 80th birthday. During his career Harris received the highest orders bestowed on civilians in both Australia and the United Kingdom. However, after a 2013 conviction for having sex with several underage girls and was convicted of 12 counts of indecent assault. He served time in jail from 2014 to 2017 and lost his titles for Order of Australia and Order of the British Empire.