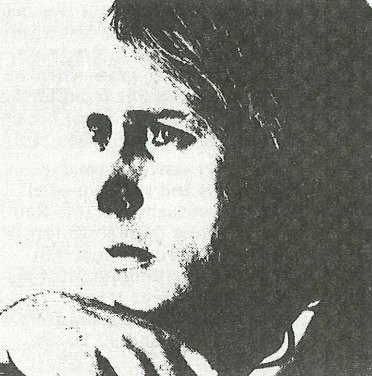 Some of the tracks on the album included backing vocals from former Chessmen bandmate Guy Sobell, two managers with Stonebolt – George Gosling and John Iuele, a producer of one mid-60s singles for the Winnipeg band the Deverons; And Daryl Burlingame – who went on to produce Medey’s People and the Northwest Company’s “Time For Everyone” and “Rock ‘N Roll Lover Man“. On guitar was Claire Lawrence Band member Hans Van Berkel, who was a session musician for Denise McCann, Shari Ulrich, the Rick Scott Band, Paul Janz, Rita MacNeil and others; Brent Shindell, who also was a session musician and vocalist for Doucette, Shari Ulrich, Raffi and Ferron; And Prism bandmate Lindsay Mitchell.

The title track from J.C. Stone’s album was released in December 1980. 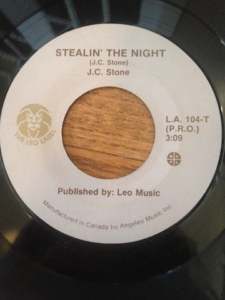 “Stealin’ The Night” is a song that takes a snapshot of strangers meeting at a night spot. A guy wearing a leather jacket, as he leans against a jukebox. He plays his next selection, “it’s the Stones.” He glances up to see a woman staring at him, and they decide to get into his car and go for a ride. They park at a dark spot. They are “new partners in a back seat crime.” They are “committing the act of love to the (car) radio.” The windows in the car fog up concealing what two are doing as they “start the fire.” He throws his leather jacket into the front seat and she lifts her legs as he sees her painted toes pushing against the interior backseat car wall.

In an article in Cosmopolitan an anecdote about having sex in the back seat of a car is offered by someone called Kelly B. – “When I was in high school, my first real boyfriend used to take me to a spot at the park, with his parents being home and all. But the best time I ever had in a car was with this tall hot Canadian pro hockey player. I was literally crazy about him and I was hanging out with the team at a strip club, when things got a little crazy! We went out back to my car and got it on. It was really hot, and the car got all steamy!”

While Ed. K reported to Cosmopolitan – “My girlfriend and I go to the same drive-in, always ask for the emptiest movie and have the best sex. I have dark tinted windows so we can see out but no one can see in. And we get more sexual there than at either of our homes, or on even out of town trips. It’s such a turn-on for both of us.”

While Nicolas Z. recalled an experience of drawing attention to others while having sex in the back seat of a car – “…I don’t know how but we ended up parking her car after class next to the wall of a far-away student parking lot. My car was on the other side of hers, so that no one could park next to it. We steamed up the windows naively thinking no one would know what was going on in there. It never dawned on us her car was moving and rocking. When we finally came out of the car we were greeted with cheers and clapping from a crowd that had gathered.”

While “Stealin’ The Night” was still on the pop chart in Vancouver, his next release “The Sound Of My Heartbeat” appeared for one week on the CKLG Top 30 in January 1981.

After 1981, J.C. Stone presumably continued for some years as a performer. This spare profile of him is found on Discogs.com: “Canadian singer, songwriter and musician from Vancouver, British Columbia active in the 1970s and 1980s.” Otherwise, there is no profile of him on canadianbands.com or other websites that usually feature Canadian recording stars. J.C. Stone is one of those recording artists who is truly off-the-grid.