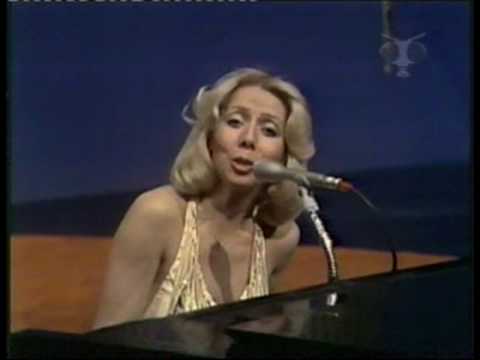 Her followup single was the title track, “Are You Ready For Love”. Next, Pasty Gallant went on to have her biggest charting success with the disco-infused “Sugar Daddy”. 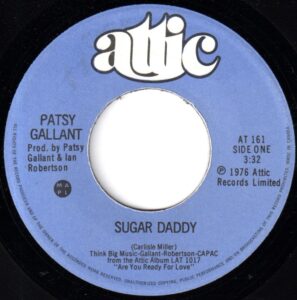 “Sugar Daddy” was written by Carlyle Miller, a singer, songwriter, brass player and producer from Québec. A member of the Ville Emard Blues Band, He wrote, arranged and was a session musician for songs recorded by a number of Quebec-based recording artists. In addition to Patsy Gallant, this included Beau Dommage, Diane Dufresne, Toulouse, Gino Soccio (“Dancer” and “The Visitors”), Kate & Anna McGarrigle, and Witch Queen (“Bang A Gong”). Miller was also part of Stardust, a fictional band in Canadian TV show from Québec, Épopée Rock, that ran from 1984 to 1990.

“Sugar Daddy” is a song about a guy in New York City with “big strong arms” who keeps his sweetheart “nice and warm.” Before she met her sugar daddy, this woman “cruised around the Caribbean” and searched all the islands. She “hunted high and low in Acapulco,” and also “tried the Riviera.” But it was in New York City she met her man. On ten occasions Patsy Gallant sings “I found my sugar daddy.”

“Sugar Daddy” peaked at #1 in Ottawa (ON) and Regina (SK), #2 in Montreal (kept out of the number-one spot by Donna Summer’s “I Feel Love” that was #1 in Montreal for five weeks in a row), #3 in Vancouver (BC), and #7 in Hamilton (ON). The single also made the Top Ten in Sydney, Nova Scotia. It was Gallant’s debut release from the album Besoin D’Amour. In 1978 Pasty Gallant returned to the Juno Awards to be nominated for Producer of the Year for “Sugar Daddy”, and win Female Vocalist of the Year for three out of four years in a row. She also won the Juno for Best Selling Single with “Sugar Daddy”.