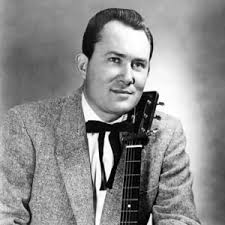 In 1928 Donald Eugene Gibson was born in Shelby, North Carolina. His family was poor and he stopped attending school in grade two to help out his sharecropping parents. He developed an interest in music at an early age and was inspired by recording artists like Tennessee Ernie Ford. Don Gibson began performing at local clubs before he was 18. In his late teens he held down a number of jobs including a as soda jerk, baby diaper deliveryman and dishwasher. A friend came home from Paris, France, after World War II with records by the jazz guitarist Django Reinhardt. This enhanced Gibson who began to experiment with different styles by his mid-teens. In 1946, he became a regular with the Tennessee Barn Dance in Knoxville, but things weren’t what Gibson expected. The fans wanted old-time country, not Gibson’s brand of crooning. He hung on to the radio job but struggled on $30 a week earned playing beer joints.

After World War II he formed a band called the Sons of the Soil who, in 1949,  appeared live on a local radio station, WHOS. With some early success, he recorded some records for Mercury Records and later with Columbia. Next he relocated to Knoxville, Tennessee, and played on the WNOX Midday Merry-Go-Round and Barn Dance series there. In 1950, he assumed control of the band, renaming them Don Gibson & His King Cotton Kinfolks and switching their musical direction to honky-tonk. Although their sound was more focused, they remained unsuccessful. Gibson continued to perform on the radio, as well as at Esslinger’s Club in Tennessee. Wesley Rose of Acuff-Rose signed him to a writing contract after seeing Gibson perform in a Knoxville club.

Rose then moved his protégé over to MGM, and in 1956 Don Gibson scored his first hit with “Sweet Dreams,” which climbed to #9 on the Billboard Country charts that year. But success was elusive for Don Gibson. Cover versions of “Sweet Dreams” by Faron Young climbed to #2 on the Billboard Country charts in 1956. Kitty Wells cover of a song Gibson wrote in 1957 called “I Can’t Stop Loving You“, set Gibson on a trajectory to getting a record contract with RCA in 1957. At RCA it was Chet Atkins who began to produce all of Don Gibson’s records through ’til 1964.

In 1958 Atkins produced Don Gibson’s follow-up single to “Sweet Dreams” titled “Oh Lonesome Me”, with “I Can’t Stop Loving You” on the B-side of the 45 RPM (and in some cases printed as a 78 RPM). The single became a double-sided hit on the country charts and then crossed over with respectable success on the Billboard pop charts. The A-side made it to #7 on the Billboard pop charts, but only to #37 in Vancouver. Later in 1958 “Blue Blue Day” which became a #1 country hit. Gibson’s fifth Top Ten country tune in 1958, “Look Who’s Blue“, climbed into the Top Ten in Vancouver, peaking at #8.

In the fall of 1960 Don Gibson’s first single release, “Sweet Dreams”, was re-recorded with a more modern country sound and appeared on the pop charts on CKWX. “Sweet Dreams” is a song about being hung up on the person you used to be in relationship with. It’s clear the relationship is over   as the singer sings “why can’t I forget you.” That sentiment isn’t something you’d sing to someone you’re seeing on a daily basis or still living with. While the relationship was in tact, it became clear it wasn’t ever going to lead to marriage. The singer tries to mount evidence of the fruitlessness of their sweet dreams by reasoning “you don’t love me, it’s plain. I should know you’ll never wear my ring.” It seems, too, that while in relationship the lover didn’t treat them very well, as they confess “I should hate you…” Yet, there was a physical-sexual attraction that is recalled each night they go to bed filling them with sweet dreams.

In 1963 Patsy Cline recorded “Sweet Dreams” and it became a major hit on the Country charts and crossed over to become a minor pop hit. In 1985 a biopic of Pasty Cline was titled Sweet Dreams: The Life And Times of Patsy Cline, starring Jessica Lange and Ed Harris.

A talented songwriter, Gibson was nicknamed The Sad Poet since most of his material concerned feelings of being alone and of love and regret. His composition, “I Can’t Stop Loving You,” has been recorded by over 700 artists. It was a #1 hit for Ray Charles in 1962. Roy Orbison was a great fan of Gibson’s songwriting, and in 1967, he recorded an album of his songs simply titled Roy Orbison Sings Don Gibson. Gibson’s wide appeal was also shown in Neil Young’s recorded version of “Oh Lonesome Me” on his 1970 album After the Gold Rush. It is one of the few songs Young has recorded that he didn’t compose.

With success came personal setbacks, however. Drug and alcohol problems plagued him, and he later said that he became hooked on speed when a doctor first prescribed it for his weight problem. Unknowingly, he wrote the song that would best describe himself and his career in 1960: “(I’d be) A Legend in My Time”. Eventually, he went back to Shelby, met Bobbi Patterson, who became his second wife and who was instrumental in turning his life around. They moved to Nashville where he devoted his life to songwriting, while continuing to record.

In 1973 Don Gibson was inducted into the Nashville Songwriters Hall of Fame. In 1980 Gibson made his last appearance on the Billboard Country charts. After 1980 Don Gibson faded from the music scene completely and had hardly been seen in public for years. He became a member of the Country Music Hall of Fame in 2001 and the North Carolina Music Hall of Fame in 2010. In a rare interview in his later years he said of his music, “My songs are simple, and just about all of them are about love. I write about people, not things. I never had a lot of education, and I don’t feel easy with words. Most of the words to my songs are real simple. I just make them up to put to some tune on the guitar I’ve come up with. It’s the sound of the guitar that I’ve always been interested in.”

Following his death from natural causes on November 17, 2003, he was buried in the Sunset Cemetery in his hometown of Shelby, North Carolina. After he died the Don Gibson Theater opened on November 2009 in historic uptown Shelby. Originally constructed in 1939, the renovated art deco gem features an exhibit of the life and accomplishments of singer/songwriter Don Gibson, an intimate 400-seat music hall, and adjoining function space that can accommodate up to 275 people.