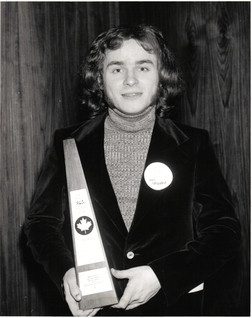 #1321: Take The Blindness by Joey Gregorash

Joey Gregorash was born in Winnipeg, Manitoba. His dad played the violin and young Joey took an interest in learning the instrument. In February 1964 Gregorash saw the Beatles perform on the The Ed Sullivan Show and was turned onto rock ‘n roll. He learned how to play the drums and formed a band called The Mongrels in 1965 with childhood friend John Nykon. Later Gregorash went solo and won a 1972 Juno Award in 1972 for Outstanding Performance-Male for his hit single “Down By the River”. For over a decade Gregorash pursued other interests until in 1987 his single, “Together (The New Wedding Song),” became a hit in Canada.

The Mongrels were a huge hit in the Winnipeg music scene from the mid to late 60s. In addition to Gregorash and Nykon, the groups’ other members were Duncan Wilson, Larry Rasmussen and Garth Nosworthy. They performed onstage with headliners visiting “The Peg” like Paul Revere and the Raiders, Neil Diamond, the Box Tops, the Kingsmen and Tommy James & the Shondells. After several singles they released their first album. This was followed in 1969 with several singles including a song written by Randy Bachman called “Funny Day”. The song was mentioned by Dick Clark on American Bandstand.

Meanwhile, in 1968 Joey Gregorash became host to a local Winnipeg TV show called Young As You Are. This was the first of three TV shows he hosted, the other two were Teen Dance Party and Joey and the Hits. After leaving the Mongrels in 1969, Gregorash got a record deal and in 1971 recorded his first album called North Country Funk. The album featured his first solo single, “Jodie” that became a Top Ten hit in Canada as well as having solid chart runs in Australia, Germany and Japan.

Several singles later his cover version of a Neil Young song, “Down By The River”, became his first hit to get some record sales in the USA. Both hits were from Gregorash’s album North Country Funk.

In 1972 Joey Gregorash received a Juno Award for Outstanding Male Vocal Performance. Gregorash’s second album was Tell the People and featured the single “My Love Sings” which was a Top 10 hit in Canada in 1972. Gregorash also had a Top 20 hit in Vancouver later that year with “Take The Blindness”. 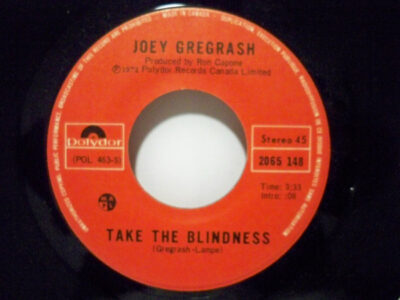 “Take The Blindness” is a song where the narrator asks to be able to see the person they are romantically involved with for who they really are. While we try to be ourselves, we can habitually miss what is going on in front of us, in the people we are closest too.

Both “My Love Sings” and “Take The Blindness” were singles were from the album Tell The People.

A cross-Canada tour ensued for the next year and he also included several bookings in the USA. Near the end of the 1970s Gregorash turned his talents to becoming a writer of radio commercials. In the late 1970s and into the 1980s he won a string of fourteen national and international awards for radio jingles and advertising campaigns. In the 1980s Joey Gregorash hosted several morning radio shows in Winnipeg. Than in 1986 he was picked to host S’Kiddle Bits, a children’s noon hour variety TV show. This resulted in the release of a children’s album called S’Kiddle Bits Bop N’ Rock. The show continued into the early 90s.

While hosting S’Kiddle Bits Joey Gregorash returned to the recording studio to make his first album for the adult market since 1972. The single from Together was the title track “Together (The New Wedding Song)“. The song was another Gregorash wrote with Norm Lampe. It became a big seller in Canada and has since been a staple among songs that couples include at weddings and wedding receptions.

After the success of the Together album, and the S’Kiddle Bits TV show, Joey Gregorash added another thread to his tapestry of talents. He became host of a TV show called Hi Noon. The show was all about the country fad, living in the country, country dance steps and country music. While the show was on the air Gregorash hosted many guests including Jann Arden and Garth Brooks.