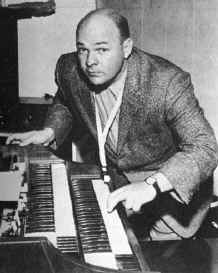 William Everett “Bill” Justis Jr. was born in Birmingham, Alabama in 1926. He was a pioneer rock n’ roll musician, composer, and musical arranger, best known for his 1957 Grammy Hall of Fame song, “Raunchy”. Justis grew up in Memphis, Tennessee, and studied music at Tulane University in New Orleans. Fine-tuning his trumpet and saxophone skills, he was featured in concert with local jazz and dance bands. In 1954, Justis went back to Memphis and hired by Sam Philips at Sun Records. While in the employ of Sun Records, Bill Justis made his own recordings. In addition he was a musical arranger Sun recordings by Jerry Lee Lewis, Roy Orbison and Johnny Cash.

When Bill Justis released “Raunchy” in November 1957, it became the first rock ‘n roll instrumental to top the pop charts. In this case #1 on the Cashbox Magazine survey and #1 on the Australian pop charts. “Raunchy” was kept out of the #1 spot on the Billboard pop charts variously by “April Love” by Pat Boone and “At The Hop” by Danny & The Juniors. Selling a million copies, the instrumental “Raunchy” established Bill Justis as a household name. His followup in early 1958, “College Man”, was a #11 hit on CHUM in Toronto, but barely made the Sensational Sixty on CKWX in Vancouver (BC). Another release in ’58, “Scroungie” made the Top 50 in Vancouver. In 1960 Justis released a single titled “Boogie Woogie Rock” credited to Bill Justis and The Jury.

In 1961, Justis moved from Memphis to Nashville and had a successful career arranging both pop and country music tunes for recording artists on labels like Monument and Mercury. Cornbread and Jerry were Bill Justis and Jerry Smith. Justis was under contract at another record company at the time, and so went by an alias to be featured on the recording of “Lil’ Ole Me“.

After “Lil’ Ole Me” Bill Justis continued to work in Nashville as an arranger. In 1963 Justis recorded “Tamoure” with the Stephen Scott Singers. 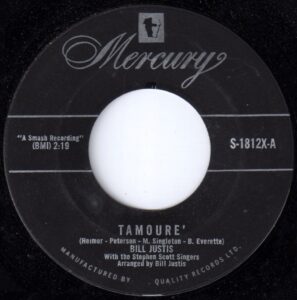 “Tamouré” was co-written by Margie Singleton, Monique Hellmer-Falk, Bill Everette and Wolf Petersen. Singleton was born Margaret Louise Ebey in rural Louisiana. She began to play guitar at the age of 13. She recorded her first Country tune in 1957 titled “One Step (Nearer to You)”. In 1958 she became a regular on the Louisiana Hayride. Singleton was a backing vocalist in the recording studio for Joe Dowell’s number-one hit in 1961 “Wooden Heart”, Leroy Van Dyke’s number-one country hit in 1961 “Walk on By”, and the 1962 Top Ten hits: Clyde McPhatter’s “Lover Please” and Ray Stevens’ “Ahab the Arab”. Between 1959 and 1964 Singleton charted eight singles on the Top 40 of the Billboard Country chart. Her most successful recording was a duet with Faron Young in 1964 titled “Keeping Up with the Joneses”. It climbed nationally to #5. Monique Hellmer-Falk was a songwriter and lyricist for lots of German Schlager productions in the 50’s and 60’s. Bill Everette is a pseudonym for Bill Justis. The fourth co-writer, Wolf Petersen, was from West Germany.

“Tamouré” was based on the dance from the islands of Tahiti featuring swaying girls in grass skirts. In the traditional dance of Tamouré, the boys shake their knees, and the girls shake their hips. In reality the movement of their knees is the engine which drives their hips. The girls feet should stay flat on the ground and their shoulders should remain stationary. The girls are largely standing still, the boys move around their partner, either facing her in front or hiding behind her back. The tempo of the music is continuously increased up to the point where only the most experienced and fittest dancers can keep their shakings up. Depending on the performers, the sexual innuendo may be more or less obvious.

The predecessor of the Tamouré, called the ʻupaʻupa, was outlawed in 1819 by western missionaries for its suggestive movements. However, dancing among the Tahitian people continued for many generations in secret.

The Islands of Tahiti extend over a large area that took European explorers several years to discover and chart all 118 islands and atolls. The total area covers more than 1.5 million square miles, approximately the same area size as Western Europe. The total land area of the 118 islands and atolls covers only 1,544 square miles, roughly equal to the state of Rhode Island.

In 1788 British Lieutenant William Bligh landed in Tahiti and he and his crew on the HMS Bounty stayed for months. After leaving Tahiti the crew staged a mutiny in April 1789. In 1880 Tahitian King Pomare V ceded the island to France. By 1958, all The Islands of Tahiti were reconstituted as a French Overseas Territory and renamed French Polynesia. The political changes brought “Tamouré” into the news, as Tahiti was in the headlines in ’58. In 1962 a film version of the novel Mutiny on the Bounty was released that starred Marlon Brando. The film had been shot on location in Tahiti between November 1960 and October 1961. Mutiny On The Bounty was nominated for seven Academy Awards in 1962, but came away with none. However, by showcasing Tahiti, the film was a catalyst for increased tourism to Tahiti and interest in its culture. In 1967 the overwater bungalow was invented in The Islands of Tahiti. It has become the symbol of this South Pacific paradise, and featured on many tourist brochures.

In “Tamouré”, the vocals by a female chorus referred to the ‘Tahitian lover’s dance.’ The Stephen Scott Singers sing about whispering “words of love.” And on Tahiti, the song instructs, when the guy kisses a girl tenderly they discover the meaning of tamouré.

“Tamouré” was taken from the Tahitian song “Vini Vini”, recorded by Terorotua and His Tahitians in 1958. The song was adapted by Monique Hellmer-Falk and Wolf Petersen for a German-speaking version. Than Bill Justis and Margie Singleton provided English-speaking lyrics.

“Tamouré” was released as a non-album single. On the back of the 45 RPM jacket were these words: “Tamouré – the fabulous Tahitian dance that has replaced the Bossa Nova and The Twist on the Continent and is fast becoming the rage in America. Tamouré is a magic blend of the carefree, sun-drenched Tahitian way of life, and the traditional gaiety of the French. When you hear the Tamouré you’ll want to dance the Tamouré – that’s the kind of music it is! Take the “tear-off” flap along to any of the dance studios listed below. Want to see how the Tamouré is done? Contact any one of the studios for a Step-by-Step Tamouré dance instruction chart. Enter Tamouré Dance Competition and win a wonderful… flight to fabulous Tahiti – home of Tamouré. Everybody is dancing it! The Tamouré is in!”

“Tamouré” became a number one hit in Australia for four weeks in June 1963, and ended up the #3 hit in the nation for the year 1963. “Tamouré” climbed to #1 in Calgary (AB), #2 in Montreal, #4 on the CFUN charts in Vancouver in May of ’63, and #7 in Chicago and Winnipeg (MB). The song was recorded by Die Tahiti-Tamourés in German under the title “Wini-Wini”. It then became a number-one hit for three weeks in May ’63 in West Germany. While over in Italy Betty Curtis (Italy’s representative for the Eurovision Song Contest 1961) had a hit with “Tamouré” in 1963 with the title “Wini Wini, Wana Wana”. Over in the UK, Chris Barber’s Jazz Band released their instrumental Dixieland jazz version of “Vini Vini”. Also in 1963 Henri Mancini recorded “Orange Tamoure” for the comedy-spy thriller Charade.

While Dick and Dee Dee sang “Vini Vini” on Shindig!, featuring it later on their album Songs We’ve Sung on Shindig! And Arthur Lyman – “the King of Lounge Music” – also recorded the song in 1964.

In 1964 Justis was contracted to play saxophone throughout the soundtrack for Kissin’ Cousins, the latest Elvis Presley film. In addition, Bill Justis became the manager of the Nashville based surf rock group, Ronny & The Daytonas, who had a Top Five hit that year titled “G.T.O.”

In 1969 singer Ray Stevens had a million selling single called “Gitarzan”. Some years later Stevens gave Bill Justis credit with giving him the phrase which became the songs’ title and inspiration for the song. Justis also wrote the scores for several films including Dear Dead Delilah (1972), Smokey and the Bandit (1977), Hooper (1978) The Villain (1979) and others. In 1982, Bill Justis died of cancer at the age of 55.

One response to “Tamoure by Bill Justis”