#172: The Waiting by Tom Petty and the Heartbreakers

Thomas Earl Petty was born in 1950 in Gainesville, Florida. His father was a traveling salesman, and his mom worked at a tax office. While still ten years old, Tom Petty met Elvis Presley on the film set for Follow That Dream. But it was seeing the Beatles on TV in February 1964, that gave Tom Petty his inspiration. He recalls, “The minute I saw the Beatles on the Ed Sullivan Show—and it’s true of thousands of guys—there was the way out. There was the way to do it. You get your friends and you’re a self-contained unit. And you make the music. And it looked like so much fun. It was something I identified with. I had never been hugely into sports. … I had been a big fan of Elvis. But I really saw in the Beatles that here’s something I could do. I knew I could do it. It wasn’t long before there were groups springing up in garages all over the place.” He dropped out of high school at age 17 to play bass with his newly formed band.

Tom Petty first formed a band called the Epics, who by 1970 morphed into Mudcrutch. Among the bandmates were Mike Campbell and Benmont Tench. Michael Wayne Campbell was born in 1950 in Panama City, Florida. He grew up in Jacksonville, and got his first guitar at age 16. Campbell was strongly influences by Bob Dylan, the Byrds, Neil Young (of Crosby, Stills, Nash & Young), Carl Wilson (of the Beach Boys), Jerry Garcia (of the Grateful Dead), the Beatles’ George Harrison, Johnny Cash’s backing guitarist Luther Perkins, Elvis Presley’s backing guitarist Scotty Moore, the Rolling Stones’ Brian Jones and the Yardbirds/Led Zeppelin guitarist Jimmy Page.

Benjamin Montmorency “Benmont” Tench III was born in 1953 in Gainesville, Florida. He began taking piano lessons as a child, but switched from classical piano to pop music when he first heard the Beatles at the start of the British Invasion. Benmont Tench met Tom Petty at a music store at the age of eleven. Petty and Tench played together as members of The Sundowners in 1964. Tench joined Mudcrutch in 1972.

Ronald Edward Blair was born in 1948 in San Diego. Raised in a Navy family, Ron played in a rock band in Japan while his father was posted in that island nation. He joined Tom Petty and the Heartbreakers in 1976. Another member of the band was Cincinnati, Ohio, born Stan Lynch. He recalls, “As a kid I had very little opportunity. I was a marginal student. I wasn’t going to college. My parents didn’t have money. I played guitar and piano, and I always thought I was going to be a guitar player. The drums were sort of a happy accident. I didn’t really think that they would be my ticket out of the ghetto. Choosing to be a musician back then was not like choosing a job, but an entire lifestyle. My father looked at me as if I were going to wear a dress and dance in the circus.”

Stanley Joseph “Stan” Lynch was born in Cincinnati, Ohio, in 1955. His family moved to Gainesville, Florida, while he was a child. Lynch recalls, “As a kid I had very little opportunity. I was a marginal student. I wasn’t going to college. My parents didn’t have money. I played guitar and piano, and I always thought I was going to be a guitar player. The drums were sort of a happy accident. I didn’t really think that they would be my ticket out of the ghetto. Choosing to be a musician back then was not like choosing a job, but an entire lifestyle. My father looked at me as if I were going to wear a dress and dance in the circus.” In 1970, Lynch met Ron Blair and was a roadie for Blair. He moved to Los Angeles and met Ron Blair again at a recording studio in 1976.

In 1976, Tom Petty and the Heartbreakers released a self-titled album. A single, “Breakdown”, peaked at #40 on the Billboard Hot 100. The album eventually was certified gold. Their second studio album, You’re Gonna Get It!, peaked at #23 on the Billboard Top LPs & Tapes chart. On June 15, 1978, Tom Petty and the Heartbreakers made their first appearance in concert in Vancouver at the Commodore Ballroom on Granville Street.

But it was their third studio album, Damn the Torpedoes, that was a breakthrough album for the band. To support the album, Tom Petty and the Heartbreakers came back to Vancouver for a concert at the PNE Garden Auditorium on December 27, 1979. The album featured the lead single, “Don’t Do Me Like That”, which peaked at #1 in Vancouver for three weeks in late January 1980, and #10 on the Billboard Hot 100. A second single from the album, “Refugee”, peaked at #1 in Vancouver on March 1, 1980, and #15 on the Billboard Hot 100.

A fourth studio album, Hard Promises, was released in 1981. During the recording of the album, John Lennon was scheduled to be in the same studio at the same time. Petty was looking forward to meeting him when he came in. The meeting never occurred, as Lennon was murdered in the archway of The Dakota on December 8, 1980, a half block from Central Park in New York City, before the date of his planned visit to the studio. Petty and the band paid tribute to the slain former Beatle by etching “WE LOVE YOU J.L.” in the runout deadwax on early U.S. and Canadian pressings of Hard Promises.

The debut single from the album was titled “The Waiting”. 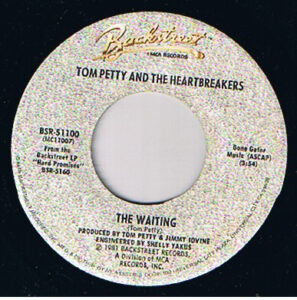 “The Waiting” was written by Tom Petty. Petty explained that the song’s title was inspired by a quote from fellow musician Janis Joplin, who once said of touring, “I love being onstage and everything else is just waiting.” Petty told Dave Linton with Ultimate Classic Rock, “That’s where I think I got it from…Janis Joplin. That’s where it stuck in my mind. I don’t think she said, ‘The waiting is the hardest part,’ but it was something to that effect: ‘Everything else is just waiting.’ And so that’s where that came from.” But, in “The Waiting”, Petty sings about dating women. The chase, and the ones that go nowhere only get him down. He sings, “Then there were those that made me feel good. But never as good as I’m feeling right now. Baby you’re the only one that’s ever known how, to make me wanna live like I wanna live now.” The hardest part is waiting for the dynamic, electric connection with someone where all the stars align, and you’ve never felt so good before.

In January 1983, Tom Petty and The Heartbreakers scored another Top Ten hit in Vancouver with “You Got Lucky”. Peaking at #4 on the west coast, the single stalled on the Billboard Hot 100 at #20. A followup single, “Change Of Heart”, charted into the Top 30 in the USA, and #14 in Toronto on CHUM-AM.

The 1985 studio album release, Southern Accents, featured the single “Don’t Come Around Here No More”, which peaked at #29 on the CKLG chart in Vancouver. In 1986 the band released Pack Up the Plantation Live!  A 1987 studio album, Let Me Up (I’ve Had Enough), featured the Top 30 hit single “Jammin’ Me”.

In the spring of 1988, Tom Petty, George Harrison, Bob Dylan, Roy Orbison and Jeff Lynne (of Electric Light Orchestra) spontaneously formed the Traveling Wilburys. They recorded and subsequently released a single titled “Handle With Care“. It peaked at #9 in Vancouver (BC) in April 1989. Roy Orbison died in 1990.

The 1989 release of Full Moon Fever featured the hit singles “I Won’t Back Down” and “Free Fallin'”.

In 1991 the band released Into the Great Wide Open. The lead single, “Learning To Fly”, stalled at #28 on the Billboard Hot 100, but climbed to #3 in Hamilton (ON). On November 18, 1991, Tom Petty and the Heartbreakers appeared in concert at the Pacific Coliseum in Vancouver.

A final Top 40 hit for the band in 1994, “You Don’t Know How It Feels”, climbed to #3 on the RPM Canadian Singles chart, and #13 on the Billboard Hot 100. On May 6, 1995, Tom Petty and the Heartbreakers appeared in concert at the Pacific Coliseum in Vancouver.

On September 2, 1999, Tom Petty and the Heartbreakers gave a concert at General Motors Place in Vancouver.

On June 8, 2010, the band returned to Vancouver to appear in concert at General Motors Place. Tom Petty and the Heartbreakers performed their final two concerts in Vancouver, both at Rogers Arena, on August 14, 2014, and three years later on August 17, 2017.