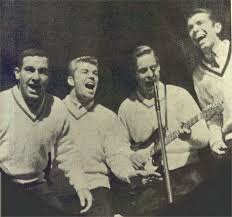 #829: Time Machine by Dante & The Evergreens

Dante & the Evergreens was an American pop group formed in 1959. They group members all attended Santa Monica College in Santa Monica, California. They consisted of baritone singer Bill Young, tenor Tony Moon, bass singer Frank Rosenthal and lead singer Donald “Dante” Drowdy.  Tony Moon had previously been the lead for a doo-wop group called Tony Moon and the Aketones. One of the people Dante & the Evergreens were acquainted with was Dean Torrence of Jan And Dean, who’d recently had a Top Ten hit titled “Baby Talk”. Torrence took the group to meet his managers, Herb Alpert and Lou Adler. Alpert and Adler decided the group could do a cover of one of the songs by another group on their label. The song was “Ally Oop” by the Hollywood Argyles.” Dante & The Evergreen’s version was arranged by Tony Moon. In addition to arranging the song, Moon sang and played guitar. Dante & The Evergreens cover of “Alley Oop” climbed to #15 on the Billboard Hot 100, while the Hollywood Argyles original recording of the song went to #1. Dante & The Evergreens had a a bigger hit with the tune on the East Coast. On WMGM-AM in New York City, their version of “Ally Oop” spent ten weeks in the Top Ten and five of these at #1. They also went to #1 with  “Alley Oop” in Philadelphia, Allentown (PA), and #2 in Toronto, New Orleans, Jacksonville (FL) and Providence (RI).

A follow-up single, “Time Machine”, hit #73 on the Billboard Hot 100. It climbed to #6 in Vancouver and #13 in Cleveland (OH), but elsewhere was an underperforming single. “Time Machine” is a song about a guy who gets hooked on the historical figure, Cleopatra, queen of Egypt. According to History.com, Cleopatra ruled Egypt from 51 BCE to 30 BCE. Around 44 BCE she visited Rome and stayed in Caesar’s villa. In 41 BCE she met Mark Antony and had a relationship with him, bearing three children.

In 2004, a History News Network poll found a disturbing trend among students in America: their indifference to history and social studies. The article by HNN was critical of the way history is taught in American schools. The perception that history is “boring” is due, in part, to the emphasis on “value-free events” that are covered in the curriculum. In an effort to help students learn history so that no one is offended by what has happened in the past, students come away with little sense of the drama, the mistakes and the triumphs that have unfolded over the centuries.

In “Time Machine”, the singer seems to be surprised that opening up a history book would result in anything interesting. His having the hots for Cleopatra is not what would be expected. To be passionate about any historical figure would have been seen as “uncool” for most American teens in 1960. Perhaps, that is why Sam Cooke could sing in “Wonderful World”, “don’t know much about history/don’t know much biology/don’t know much about a science book/don’t know much about the French I took….” Studies in school weren’t cool, they were boring. What was interesting was going on a date and rock ‘n roll.

In 1864, Jules Verne wrote a novel titled Journey To The Center Of The Earth. In 1959, the novel was adapted for the big screen and starred Pat Boone and James Mason. As the characters descend layers below the earth’s surface they encounter dinosaurs and other signs of earlier civilizations. The film, in turn, spawned a cartoon series that ran from 1967 to 1969. It opened each episode with these words: Long ago, a lone explorer, named Arnie Saknussen, made a fantastic descent to the fabled lost kingdom of Atlantis at the Earth’s core. After many centuries, his trail was discovered: first by me, Professor Oliver Lindenbrook, my niece Cindy, student Alec McEwen, our guide Lars, and his duck Gertrude. But we were not alone. The evil Count Saknussen, last descendant of the once noble Saknussen family, had followed us…to claim the center of the Earth for his power-mad schemes. He ordered his brute-like servant, Torg, to destroy our party. But the plan backfired, sealing the entrance forever. And so, for us, began a desperate race to the Earth’s core…to learn the secret of the way back. This is the story of our new journey to the center of the Earth!

In 1964 there was a science fiction film titled the The Time Travellers. It was set in 2071 and concerned a time portal taking its entrants to places in the past and the future.

Cultural interest in time travel was the subject of the TV show, Time Tunnel.  It starred pop singer, James Darren, Robert Colbert and Lee Meriweather. The show was based on Project Tic-Toc, a top secret U.S. government project to create an experimental time machine called “The Time Tunnel.” It had a due cylindrical hallway they run into as they go from one period of history to the next. The base for Project Tic-Toc is a huge, hidden underground complex in Arizona, 800 floors deep and employing more than 12,000 specialized personnel. An announcer would state at the beginning of the program, “two American scientists are lost in the swirling maze of past and future ages during the first experiments on America’s greatest and most secret project, the Time Tunnel. Tony Newman and Doug Philips now tumble helplessly toward a new fantastic adventure somewhere along the infinite corridors of time.” The series was set in 1968, two years further into the future from the 1966 opening season. Tony and Doug became participants in past events, like the sinking of the Titanic, the attack on Pearl Harbor, Custer’s Last Stand and the Battle of the Alamo.

At the end of 1960 they had a regional hit in Syracuse, New York, with “What Are You Doing New Year’s Eve”, which climbed to #3 on WNDR-AM. Their final single release was a doo-wop tune titled “Da Doo.” It made the Top 40 in San Francisco in the summer of 1961. The group toured for several years on the strength of their few successful singles.

Though the four members of the group were white, Dante & The Evergreens were among the first all-white recording acts to perform at leading venues in the African-American community. These included the Apollo Theatre in Harlem, the Uptown Theatre in Philadelphia, and the Howard Theater in Washington D.C.  The group split up in 1962.

Donald Drowty – the group’s “Dante” – recorded “Something Happens” as Dante and His Friends. The song went to #5 in Seattle on KAYO-AM in January 1962. A single titled “Miss America” was minor hit on the west coast in the spring of 1962. Drowty had some success as a writer and producer, including several tracks for The Isley Brothers and Herb Alpert.  Tony Moon, after the break-up of the group in 1962 moved to Nashville and become Brenda Lee’s Conductor and Guitar Player for the next several years. He also produced three songs for The Vogues. He wrote “Soldier Of Love”, recorded by The Beatles and Pearl Jam. Moon also wrote “Who Put All My Ex’s in Texas” for Willie Nelson. Bill Young wrote a song for Kathy Young & The Innocents in 1961. According to the website, tsimon.com, “Bill Young pursued a career as a solo act, and in acting. Frank Rosenthal returned to college and eventually became a successful Beverly Hills attorney.”