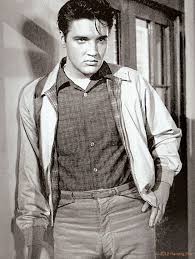 Elvis Aaron Presley was born on in a two-room house in Tupelo, Mississippi, on January 8, 1935. His twin brother, Jessie Garon Presley, was stillborn. When he was eleven years old his parents bought him a guitar at the Tupelo Hardware Store. As a result Elvis grew up as an only child. He and his parents, Vernon and Gladys, moved to Memphis, Tennessee, in 1948. The young Presley graduated from high school in 1953. That year he stopped by the Memphis Recording Service to record two songs, including “That’s When Your Heartaches Begin,” song #1196 on this Countdown. Elvis’ musical influences were the pop and country music of the time, the gospel music he heard in church and at the all-night gospel sings he frequently attended, and the black R&B he absorbed on historic Beale Street as a Memphis teenager. In 1954, Elvis began his singing career recording “That’s All Right” and “Blue Moon Of Kentucky” at Sun Records in Memphis.

In late 1955, his recording contract was sold to RCA Victor. In 1956 he had his first #1 record titled “Heartbreak Hotel.” He had a sound and style that uniquely combined his diverse musical influences and blurred and challenged the social and racial barriers of the time. Bill Haley & His Comets ushered in the rock ‘n roll into mainstream culture in 1955 when “Rock Around The Clock” appeared in the film about juvenile delinquents and anti-social behavior in an inter-racial school. The song became an anthem for teenage rebellion. However, it was Elvis in 1956 who ensured rock ‘n roll was here to stay with his swiveling hips and R&B infused songs with sexually suggestive lyrics. He starred in 33 successful films, made history with his television appearances and specials, and knew great acclaim through his many, often record-breaking, live concert performances on tour and in Las Vegas. Globally, he has sold over one billion records, more than any other recording artist.

In 1958 Elvis starred in his fourth film, King Creole, based on Harold Robbins 1952 novel A Stone For Danny Fisher. The plot concerned a 19 year old male who gets involved with crooks and two women. Nineteen-year-old high school student Danny Fisher works before and after school to support his surviving family: his father and sister Mimi. After Danny’s mother died, his grieving father lost his job as a pharmacist, and moved his impoverished family to the French Quarter in New Orleans. To make the film, Presley was granted a 60-day deferment from January to March 1958 for beginning his military service. Location shooting in New Orleans was delayed several times by crowds of fans attracted by the stars, particularly Presley. The film was released by Paramount Pictures on July 2, 1958, to both critical and commercial success. The critics were unanimous in their praise of Presley’s performance. King Creole peaked at number five on the Variety box office earnings charts for the film industry. The debut single from the film, “Hard Headed Woman”, quickly became a top seller. It was #1 for three weeks in July 1958 on the CKWX charts.

Another song from King Creole on the Vancouver pop charts was “Trouble”. In the film Danny has met a woman named Ronnie who he witnessed in an abusive encounter with someone she’s dating. Later, Danny sees Ronnie at The Blue Shade nightclub, where Danny is now employed. At first, Ronnie pretends not to know him, as she is accompanied by her boyfriend and the club’s owner, Maxie Fields, aka “The Pig.” When Maxie does not believe her, she claims she heard Danny sing once. Maxie insists that Danny prove he can sing. His rendition of “Trouble” impresses Charlie LeGrand, the honest owner of the King Creole nightclub. This is the only nightspot in the area not owned by Maxie. Impressed, LeGrand offers Danny a job as a singer at his club. Ten years later, Presley opened his 1968 comeback special with “Trouble”, Susan Doll writes in “Understanding Elvis: Southern Roots vs. Star Image,” that with dark, moody lighting highlighting his sneer, the sequence alluded to Presley’s checkered past and “dangerous” image, Elvis’ choice of opening his 1968 special with “Trouble” served to prove that the singer was still “sexy, surly and downright provocative.”

“Trouble” has been covered by a number of singers over the years including Jackie DeShannon and Suzi Quatro. In 2017 two time figure skating world champion Javier Fernández performed part of his Elvis Presley free program to “Trouble” when he won his 5th consecutive European Championships gold medal. The program also included sections of “Fever” and “Jailhouse Rock”.

“Trouble” was co-written by the songwriting team of Jerry Lieber and Mike Stoller. The duo wrote over 70 songs that made the pop charts across three decades. Their first song was in 1952, “Hard Times”, Charles Brown’s final Top Ten R&B. Lieber and Stoller’s last hit record was “I Keep Forgettin'” recorded by Michael McDonald in 1982. In between they collaborated with Barry Mann and Cynthia Weil to compose “On Broadway” for The Drifters. They’d also co-written “There Goes My Baby” for The Drifters with Ben. E. King and when King went solo, they co-wrote “Stand By Me”. Leiber and Stoller had one of their best successes with The Coasters who recorded the duo’s “Searchin'”, “Yakety Yak”, “Charlie Brown” and “Poison Ivy” among others. But Leiber and Stoller struck gold writing songs that are now part of Elvis Presley’s most memorable tunes. These include “Hound Dog”, “Jailhouse Rock”, “Don’t”, “King Creole” and “She’s Not You”.

Over his recording career Elvis Presley earned 14 Grammy Award nominations including for Record of the Year with “A Fool Such As I” (1959) and “Are You Lonesome Tonight” (1960) and won six Hall of Fame Awards. After his comeback tour in 1968 Presley had continued to tour extensively, with 168 concerts in 1973, a pace he kept through the mid-70’s. By 1976 he was suffering from multiple ailments: glaucoma, high blood pressure, liver damage, and an enlarged colon, all believed to be related to prescription drug abuse. He died on August 16, 1977, and a funeral was attended by over 80,000 mourners. His legacy continues to live on. There are also numerous sightings of Elvis including around the 40th anniversary of his death in 2017.