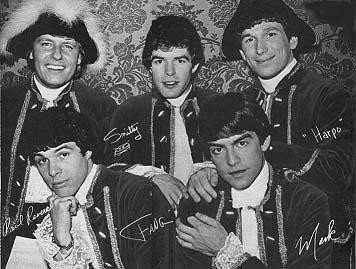 #198: Ups And Downs by Paul Revere And The Raiders

A band called The Downbeats formed in Boise, Idaho, in 1958. Paul Revere Dick started the band originally as an instrumental group. They had their first chart single in Vancouver in 1960. It was an instrumental riff on the piano tune, Chopsticks, which they titled “Beatnik Sticks”. They changed their name to Paul Revere And The Raiders in 1960. Between 1960 and 1976 they released 41 singles. They charted five songs into the Top Ten on the Billboard Hot 100 in the USA. These included “Kicks”, and “Hungry” (1966), “Him Or Me – What’s It Gonna Be?” (1967) and their cover of Don Fardon’s 1968 single “Indian Reservation,” which peaked at #1 for the band in 1971. They were even more popular in Vancouver where they charted over fifteen songs into the Top Ten on the local charts here on the West Coast.

Paul Revere Dick was born in Harvard, Nebraska, in 1938. He first met singer Mark Lindsay in 1958 while picking up hamburger buns at the bakery where Lindsay worked. At the time Revere owned several restaurants in Caldwell, Idaho. Lindsay was born in Eugene, Oregon, in 1942. In the group’s song, “The Legend of Paul Revere”, they sang about how they got their start.

In a little town in Idaho way back in sixty one,
a man was frying burgers, gee – it seemed like lots of fun.
But to his friend the bun boy, he confessed it’s misery,
I think I’d like to start a group, so come along with me.

The song was using poetic license as they group started in ’58 not ’61. But “fun” rhyming with “one” had more appeal then writing “way back in fifty-eight, a man was frying burgers, gee, it seemed to be real great.”

Just as they were starting to get a name Paul Revere Dick was drafted into the United States Army. He became a conscientious objector and worked as a cook in a facility for patients with mental health issues. While Revere was in the U.S. Army, Mark Lindsay toured with the Raiders in 1961, after they had a Top 40 hit instrumental in the USA called “Like Long Hair” early that year. It climbed to #3 in Cleveland, Ohio, and #29 in Vancouver. That summer a piano player named Leon Russell filled in for Paul Revere. When Revere returned to civilian life in 1962 the band moved to Portland, Oregon. In April 1963 both Paul Revere And The Raiders and The Kingsmen recorded a tune called “Louie Louie”. Both versions were spirited, but it was The Kingsmen’s version that would go to #2 on the pop charts in the USA, while Paul Revere & The Raiders version missed the Billboard Hot 100.

By 1965 the band had released fourteen singles, but didn’t have any sizable hit. Then they released “Just Like Me” and everything changed. The infectious pop rock tune climbed to #11 on the Billboard Hot 100 and #3 in Vancouver in January 1966. The pattern of the band typically outperforming on the charts in Vancouver would continue over seven years. On June 24, 1966, while “Hungry” was climbing the pop charts in Vancouver, Paul Revere and the Raiders appeared in concert at the PNE Agrodome. In November, 1966, Paul Revere & The Raiders appeared on the Batman TV show, in an episode called “Hizzoner The Penguin.” They were also regular guests on Dick Clark’s Where The Action Is.

One of the keys to the success of the band was bass player Phil “Fang” Volk. Born in 1945 in Burbank, California, his family moved to Idaho where he grew up. In the early Sixties Volk was playing in a number of bands, including Sir Winston’s Trio, who appeared on a local TV show that Paul Revere saw. Another member of Sir Winston’s Trio was Drake Levin, who was asked to become lead guitarist for Paul Revere And The Raiders in August 1963. Volk got a call from Revere to become the bands bass player in January 1965. It was Volk’s guitar riffs on “Just Like Me,” “Kicks” and “Hungry,” that gave the band an edge as they grew in popularity.

Michael LeRoy Smith was born in 1942 in Beaverton, Oregon, a suburb of Portland. “Smitty” Smith met Paul Revere and Mark Lindsay at a teen dance club called the Headless Horseman in Portland in 1962. Smith became the band’s drummer that summer.

Jim “Harpo” Valley was born in Tacoma, Washington, in 1943. He was with Don & The Goodtimes in 1966 when Paul Revere asked him to join The Raiders for a tour in March 1966. He was interviewed by Dick Clark about being a new member of the band on an episode of Where The Action Is in 1966.

Drake Maxwell Levinshefski was born in Chicago in 1946. Just before his seventeenth birthday he became lead guitarist for Paul Revere And The Raiders in August, 1963. As he was the youngest member of the band, Drake Levin was nicknamed “The Kid.” During 1966 Levin was called by Uncle Sam to join the U.S. Army. By serving with the National Guard, Levin was able to fulfill his service obligation and also help with the upcoming recording sessions for the bands next album, The Spirit of ’67, released in the fall of 1966. The first single off the album was “Hungry,” which climbed to #1 in Vancouver and #6 on the Billboard Hot 100 in July 1966. The next single off the album was “The Great Airplane Strike”. A third single, “Good Thing”, was the most successful, climbing to #4 on the Hot 100 and #2 in Vancouver in December 1966.

With the success of their singles and albums the band was Columbia Records top selling recording act in 1967. However, Phil Volk, Drake Levin and Michael “Smitty” Smith left Paul Revere And The Raiders in 1967 to form Brotherhood. Volk went on to become bass player for Rick Nelson. Jim “Harpo” Valley left to pursue a solo career. A new member of the band in 1967 was Freddy Weller

Wilton Frederick “Freddy” Weller was born in Atlanta in 1947. After joining Paul Revere and the Raiders on guitar, Weller also wrote a number of pop songs. In 1969 he co-wrote “Dizzy” and “Jam Up And Jelly Tight” with Tommy Roe (which were hits for Roe in 1969 and 1970). Weller went on to chart six Top Ten singles into the Billboard Hot Country Songs chart between 1969 and 1973. Also, Joe Correro Jr., who grew up in the Deep South, became the bands’ drummer (until 1971).

A third newcomer to the band was Keith Allison. He was born in Coleman, Texas, in 1942. In 1965, he won a “Paul [McCartney] lookalike” contest, sponsored by The Beatles, the American teen magazine “Tiger Beat,” and Dick Clark. Allison also released three  singles between 1965 and 1967, including his regional hit “Louise” which he sang on Where The Action Is on February 20, 1967. Allison was a regular co-host with Dick Clark of Where The Action Is from September 1965 to March 1967. Allison also played on some tracks in the studio for The Monkees. And prior to joining the Raiders, Keith Allison recorded for a band with Mark Lindsay and Steve Alaimo in 1966 called The Unknowns. Ironically, as their name suggests, they remained unknown to the general public.

Next up for the band was a single titled “Ups And Downs”. 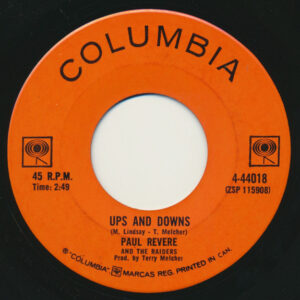 “Ups And Downs” was cowritten by Mark Lindsay and Terry Melcher. It is a song about a guy who wants to settle down with the woman in his life. But, she has been used to her “social twirl.” She doesn’t consider building a life with him that appealing. Of course, the guy narrating the song concedes “I’ve been down for a long, long time.” Though the lyrics don’t tell us, perhaps she got enough of a glimpse of how depressed he could get. After all, we learn he’s had a lot of pain, and “been torn up.” Much as he’s counting on her to choose to stay with him, she’s changed her mind. And, as it happens, he was blindsided by her choice to move on. Now he is emotionally going up and down.

But only about half of the states in the USA had “Ups And Downs” chart well. Consequently, the song stalled at #22 on the Billboard Hot 100.

In late August, 1967, Valley had a Top 20 hit on both CFUN and CKLG with “Try, Try, Try” when Paul Revere and the Raiders had their next Top Ten hit in Vancouver called “I Had A Dream”.

Paul Revere And The Raiders next single was a double-sided hit, “Peace Of Mind”/”Do Unto Others”, which peaked in the Top Ten in Vancouver at the end of ’67. The band followed this up with another Top Ten hit in Vancouver titled “Too Much Talk”.

Next, Paul Revere and Mark Lindsay co-hosted a show that ran after American Bandstand in 1968 called Happening ’68. Revere and Lindsay added new musicians to their lineup. In 1969 the band had their first gold record with “Let Me”.

On February 27, 1970, Paul Revere and the Raiders appeared in concert in Vancouver at the Queen Elizabeth Theatre.

After their #1 hit with “Indian Reservation” in 1971, the band would release a few more singles with mixed success. By 1973 they were passé as progressive rock groups like Yes, folk-rock singers like Jim Croce and James Taylor, and evolving soul sounds from Marvin Gaye, Eddie Kendricks, Stevie Wonder and Billy Paul pushed the band out of the Top 40.

Shortly after Mark Lindsay, who had already recorded several solo hits, left the band. Lindsay had begun a solo career in 1969 with a Top Ten hit in 1970 titled “Arizona”, as well as “And The Grass Won’t Pay No Mind“. He released almost 20 singles between 1969 and 1981, the last being “Disco Kicks”. He has continued to tour over many decades, including on oldies tour packages, and was scheduled on the Happy Together tour of 2020 prior to the outbreak of the pandemic.

Michael “Smitty” Smith moved to Hawaii and was badly injured in a car crash. In 2000 he was working in a lumberyard in Kona and playing in a band at night. But he was rushed to hospital with internal bleeding and died at the age of 58. Jim “Harpo” Valley was only in the recording studio with Paul Revere And The Raiders for The Spirit of ’67. Disappointed with his lack of opportunity to shape the band’s sound, he went on to a solo career early in 1967. Over the years Jim Valley has performed in a variety of settings including hospital wards for children. He lives in Gig Harbor, Washington.

Drake Levin went on to play with Lee Michaels and with Emitt Rhodes (formerly of the Merry-Go-Round). He died of cancer in San Francisco at the age of 62 in 2009.

Phil Volk’s band, Fang and the Gang, released covers of old Paul Revere And The Raiders hits on the album, Fang Reveres The Raiders, in 2005.

Joe Correro Jr. went on to record in the studio with other popular stars including Liberace, Al Kooper, Al Jarreau, Joe Cocker, Jennifer Warnes, João Gilberto, played drums on Hamilton, Joe, Frank & Reynolds 1971 hit “Don’t Pull Your Love Out”, their number-one 1975 hit “Fallin’ In Love” and Top 20 hit that year titled “Winners And Losers”; Maureen McGovern’s 1973 number-one hit “The Morning After” from the film The Poseidon Adventure; and others. In the 2000s he was referenced as a musician with the Los Angeles-based Richard Sherman Trio jazz combo.

After leaving Paul Revere and the Raiders in 1975, Keith Allison toured as lead guitarist with Dolenz, Jones, Boyce & Hart in 1976. He played drums on Johnny Rivers cover of “Rockin’ Pneumonia and the Boogie Woogie Flu”, which became a Top Ten hit in 1973; Was a session musician on Nilsson’s 1976 album That’s The Way It Is and 1980 album Flash Harry. He also was a backing vocalist on a Ringo Starr album in the 2008.

As of June 2019, Paul Revere’s Raiders, are led by Paul Revere’s son, Jamie Revere. In mid-February 2019, the band performed in the lineup on a Where The Action Is Caribbean cruise. Other performers include The Buckinghams, Joey Molland’s Badfinger, Peter Rivera (Original Lead Singer of Rare Earth 69/75), Gary Lewis & The Playboys, the 1910 Fruitgum Company and Danny & The Juniors.