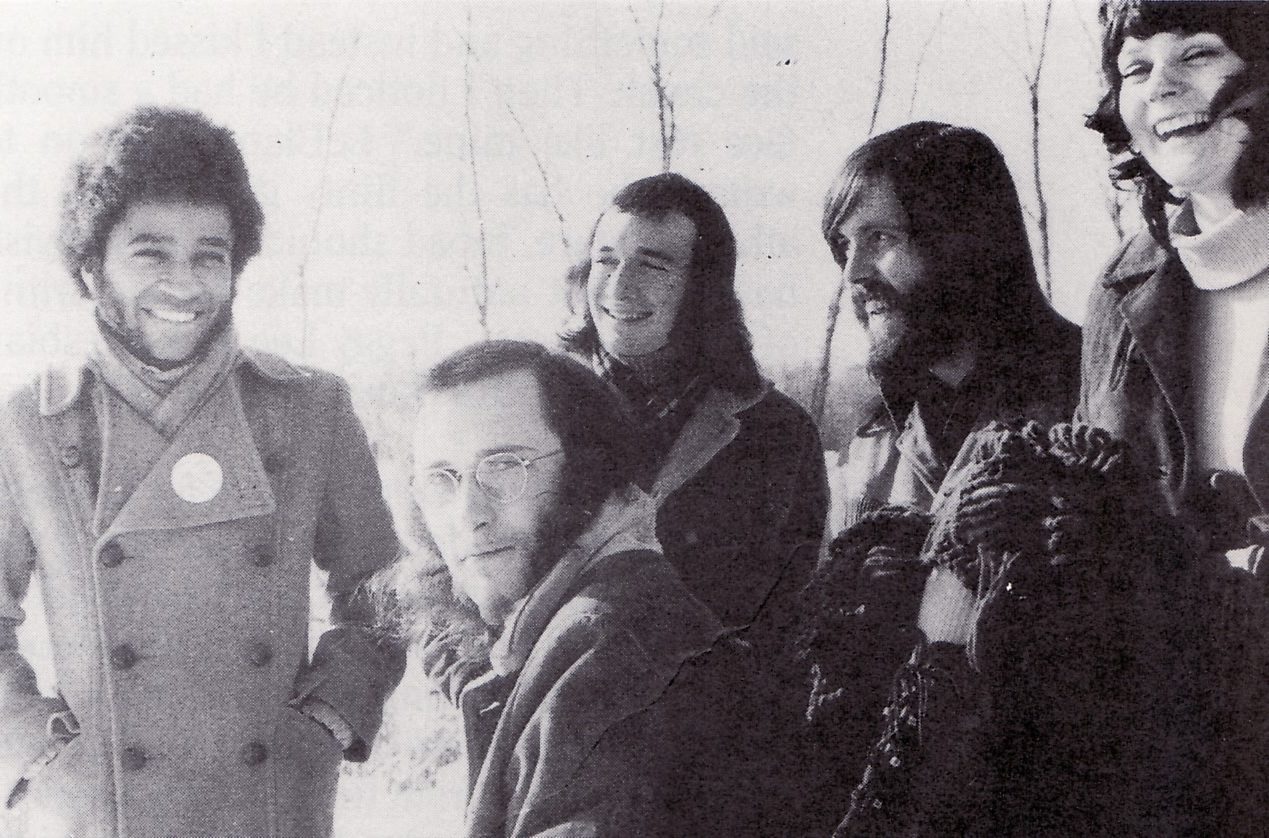 Dave Tamblyn and Greg Brown were high school friends in London, Ontario. Dave played guitar and Greg played keyboards. They played gigs on the weekends with a variety of bands. In time they added singer Janice Morgan and became Leather and Lace. From London, they relocated to Toronto and performed in the hipster scene in trendy Yorkville. They added to their number bass player Jeff Jones and drummer Chuck Slater. In 1970 Yorkville Records was able to get Capitol Records to be the distributor for Ocean. Their debut single, “Put Your Hand In The Hand” went to #2 on the Billboard Hot 100 and #1 in Vancouver. The song had been recorded as a track by Anne Murray on one of her albums a few years prior. Ocean quickly went from playing gigs at high schools and night clubs in Toronto to doing concerts across North America and Europe, as well as starring on the A list of pop music TV shows.

Their debut album, Put Your Hand In The Hand, featured their next two singles, “Deep Enough For Me” and “We’ve Got A Dream”. “We’ve Got A Dream” laments “people wrecking up the planet.” The lyrics encourage people to act as if they all have “the same mother, and the world is your home.” The mother, in this case, is mother earth. The dream in the song is for people to be good to each other. The habit of fighting and destroying the planet is unsustainable.

During the ’60’s and into the early ’70’s there were many songs on the pop charts that were anti-war/peace songs. These include “American Woman” by the Guess Who, “Aquarius/Let The Sunshine  In” by the Fifth Dimension, “Blowin’ In The Wind” by Peter, Paul and Mary, “For What It’s Worth” by Buffalo Springfield, “Eve Of Destruction” by Barry McGuire, “Fortunate Son” by Creedence Clearwater Revival, “Galveston” by Glen Campbell, “Give Peace A Chance” by the Plastic Ono Band, “Happy Xmas (War Is Over)” by John Lennon, Yoko Ono and the Plastic Ono Band, “I’d Love To Change The World” by Ten Years After, “Last Train To Clarksville” by The Monkees, “Lay Down (Candles In The Rain)” by Melanie, “Ohio” Crosby, Stills, Nash & Young, “Question” by the Moody Blues, “One Tin Soldier” by the Original Caste, “Peace Train” by Cat Stevens, “Sky Pilot” by Eric Burdon & The Animals, “Sweet Cherry Wine” by Tommy James & The Shondells, “Sunshine” by Jonathan Edwards, “Unknown Soldier” by The Doors, “Universal Soldier” by Buffy Sainte-Marie, “War” by Edwin Starr, “War Song” by Neil Young, “What The World Needs Now Is Love” by Jackie DeShannon, “What The World Needs Now Is Love”/”Abraham, Martin And John” by Tom Clay, “What’s Going On” by Marvin Gaye, “Where Have All The Flowers Gone” by the Kingston Trio, “With God On Our Side” by Bob Dylan, “Woodstock” by Crosby, Stills, Nash & Young and “Crystal Blue Persuasion” by Tommy James & The Shondells.

There were also songs concerned about care of the environment. Among the most notable were “After The Gold Rush” by Neil Young, “What Can The Matter Be?” by the Poppy Family, “Morning Dew” by Lulu, “Mercy Mercy Me (The Ecology)” by Marvin Gaye, “Big Yellow Taxi” by Joni Mitchell, “Rocky Mountain High” by John Denver, “Going Up The Country” by Canned Heat”, “What A Wonderful World” by Louis Armstrong, “Where Do The Children Play” by Cat Stevens, “Signs” by the Five Man Electrical Band, “Paradise” by John Prine, “Garden Song” by Pete Seeger, “In The Year 2525” by Zager and Evans, and “What Have They Done To The Rain” by Malvina Reynolds.

The writers of “We’ve Got A Dream” are UK songwriters and singers Roger John Reginald Greenaway (born in 1938) and Roger Frederick Cooke (born in 1940). Both were born in a suburb of Bristol, England. Roger Greenaway was one of the founding members of a close harmony group called The Kestrels, who formed in 1955. The group provided backing vocals for recording artists Billy Fury, Eden Kane, Lonnie Donegan and singer/comedian Benny Hill. Roger Cook joined The Kestrels in 1964. It was when Greenaway and Cook got to know each other as members of The Kestrels they glimpsed a creative fusion they wanted to pursue. In 1965 the pair co-wrote “You’ve Got Your Troubles”, which became a Top Ten intentional hit for The Fortunes. Between 1965 and 1967 the pair billed themselves as David and Jonathan, after two characters in the Hebrew scriptures who had name recognition in the wider culture. As David and Jonathan they recorded a cover version of The Beatles song, “Michelle”, followed by a song they wrote titled “Lovers of the World Unite.” Sometimes in collaboration with other songwriters, Cook and Greenaway co-wrote numbers of other pop hits. These include “Green Grass” by Gary Lewis & The Playboys, “I Was Kaiser Bill’s Batman” by Whistling Jack Smith and “Long Cool Woman (In A Black Dress)” by The Hollies. The novelty song, “I Was Kaiser Bill’s Batman,” had a guy named Billy Moeller appear in TV shows who whistle-synched the song. But the actual whistling on the record was by a guy named John O’Neill who never appeared to whistle-synch the song.

In 1970, the songwriting duo of Cook–Greenaway collaborated to write a song called “True Love and Apple Pie”, recorded by Susan Shirley. The song was then rewritten by Cook and Greenaway, along with Bill Backer and Billy Davis, two ad men for Coca-Cola. The result was a catchy tune revised as a Coca-Cola commercial which aired through 1970-71. The line, “I’d like to buy the world a Coke and keep it company,” became an ear worm for many TV viewers and radio listeners that year. The popularity of the commercial led to it being reworked and titled “I’d Like To Teach The World To Sing.” It was recorded by The New Seekers and became a #1 hit in the UK and Vancouver (and #7 in the USA) in 1972. The song decades later was played during the end of episodes of the TV show, Mad Men.

In 1970 Greenaway teamed up with Tony Burrows to record under the name of The Pipkins with a novelty tune that reached the Top Ten in Vancouver called Gimmie Dat Ding”. That same year, Greenaway was temporarily a member of the Brotherhood of Man. That group charted a Top 20 hit internationally titled “United We Stand.” And in 1970 Cook and Greenaway co-wrote a song that would go on to be in the Top 100 for the year in both the UK, the USA and in Canada titled “My Baby Loves Lovin’” by The White Plains. That song went to #1 in Vancouver, though it only peaked at #13 on the Billboard Hot 100. Cook and Greenaway later wrote “Jeans On” recorded by David Dundas. It was a #1 hit in Vancouver in February of that year. Though the song only peaked at #17 in the USA, it stayed on the Billboard Hot 100 long enough to become the #73 song of 1977.

Though Ocean’s touring won them many rave reviews, their personal income was tarnished by discovery of missing funds and mismanagement by agents. In 1972 they released a second album, Give Tomorrow’s Children One More Chance. The title came from the second line from their debut single from the album, “One More Chance”.

Ocean continued to tour into the mid-70s with an increasing revolving door in their lineup. Shady business practices caused disenchantment and all the original members quit the band except Greg Brown. Jeff Jones went on to play with Red Rider and Ronnie Hawkins. David Tamblyn turned his attention from performing to making string bows and other woodworking products. He has become internationally renowned for his expertise while he also maintains a bow-making workshop at his home on Toronto Island.