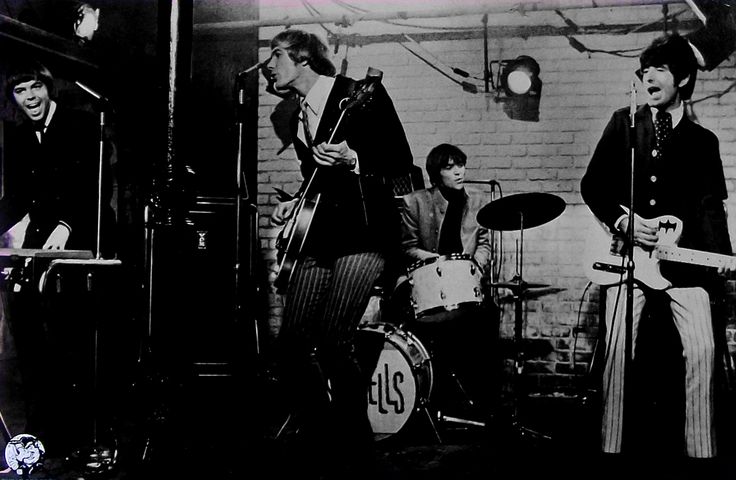 “Best known for their hit Dirty Water, The Standells released a string of snotty, aggressive garage singles in the mid to late 1960s which are now rightly regarded as proto-punk classics. “Sometimes Good Guys Don’t Wear White”, “Why Pick On Me”, “Riot On Sunset Strip” ~  the songs of The Standells have been covered by everyone from Bruce Springsteen, Aerosmith and U2 to Spacemen 3, Minor Threat and a million 77 punk bands as well as many subsequent scene bands. ”

The Standells are considered by many to be the godfathers of punk rock. The group was formed in 1962 in Los Angeles by keyboardist and lead vocalist Larry Tamblyn and guitarist Tony Valentino. Larry created the name from “Standing” around booking agencies trying to get work. Originally the group was called the “Standels” (with one “l”), but was changed to the “Standells” spelling in 1963. The name was also lengthened for awhile to Larry Tamblyn and the Standells, as noted in the Vernon Joynson book “Fuzz Acid & Flowers”. Their first recording, “You’ll be Mine Someday”/”Girl in My Heart”, was recorded in 1963 and released in 1964 on Faro Records. Later that year, the name was shortened to “Standells.”

In 1963 The Standells appeared in the Connie Francis movie Follow the Boys, where they played background music at party scenes. The brother of Standells lead vocalist and drummer, Larry Tamblyn, was Russ Tamblyn. Both brothers had roles in the film. The older brother, Russ, played the role of Riff, the leader of the Jets gang in the 1961 movie musical version of West Side Story .

The Standells were signed by Liberty Records and issued an album The Standells In Person At P.J.’s in 1964 (later re-released as The Standells Live and out of Sight). After having no success with Liberty they signed with Vee Jay in 1965 for two singles, one of which was produced by Sonny Bono of Sonny & Cher. Cher did backup vocals on one of the songs, “The Boy Next Door”.

In 1964 The Standells guest starred as themselves in an episode of the The Munsters, “Far Out Munster.” In the episode they performed “Come On and Ringo” and a cover of The Beatles hit, “I Want to Hold Your Hand”. That same year The Standells appeared in the movie, Get Yourself a College Girl. This beach party movie featured other artists including The Animals, Nancy Sinatra, The Dave Clark Five, Donnie Brooks and Stan Getz. In the movie The Standells performed cover versions of “The Swim” and “Bonnie Maronie”.

The group began 1965 with a January 18 appearance in The Bing Crosby Show episode “Bugged By the Love Bugs,” playing the fictional band, the “Love Bugs”. They appeared as a nightclub band in the “Three L’il Lambs” episode of Ben Casey on March 18, 1965. They also sang the title song for the children’s movie, Zebra in the Kitchen.

By the summer of 1965 the Standells had released seven singles variously in the Linda, Liberty, Vee-Jay and MGM record labels. None had cracked the Billboard Hot 100. So the band decided again to switch labels, hoping for better promotion.

In July of 1966 their first hit single on Tower Records “Dirty Water” reached #11 on the Billboard charts, #8 in Cashbox, and #1 in Record World. They also appeared on TV shows like Shindig!, American Bandstand and Where the Action Is. Despite the references to Boston and the Charles River in “Dirty Water”, The Standells are not from Massachusetts. Nevertheless, “Dirty Water” is still played after every home victory won by the Boston Red Sox, Boston Celtics, and Boston Bruins as well as at Northeastern Huskies’ hockey games. One would be hard-put to find either a sports fan or rock music lover in Massachusetts who had never heard of the Standells.

Their next single on Tower Records was “Sometimes Good Guys Don’t Wear White“. The single climbed to #43 on the Billboard Hot 100, #59 on the Cashbox Top 100 Singles chart. In Vancouver (BC) the song peaked at #7.

“Why Pick On Me” was The Standells third single to chart in Vancouver. Curiously their biggest hit stateside, “Dirty Water”, only peaked at #22 on CFUN. While their two follow up singles missed the Top 40 in the USA, both find their way into this 1130 Top Hits list.

“Why Pick On Me” is about a female who is plays the field and the “tease” to get men turned on. She’s someone who “lies,” “somebody who messes you up.” The singer wonders why she picks on him wearing “short, short skirts and dirty boots”, and “puzzled lips dipped in wine”. He sums up:
“Long hair up against my skin but never once have you given in.
To any one of my wants or needs no matter how my poor heart bleeds”. In an article, “Why Do Women Tease Men,” Jacob Sammuel relates how some women tease men. This is not the pulling the hair variety of teasing, this is teasing with sexual overtones and more. For some women getting attention from men by flirting is fused with their own sense of self-worth. If they don’t get a response to their teasing this cohort of women can feel their self-identity is somehow diminished. For some women the underlying issue is their own insecurity. If there isn’t a guy who is currently hot over them, they feel they must not be beautiful enough to merit a man’s attention. With the emphasis in TV commercials and magazines, it is easy to appreciate how some women get caught up in obsessing about whether they are attractive or not. And if they are single, anxiety about these issues can ramp up their teasing behavior as they pick on guys to tease and flirt with. It can send confusing messages to the men on the receiving end of these flirtations. After all, the intent of the teasing for these women is to just get validation that they are hot stuff, not to actually get involved, even casually. So like the female in the song, “Why Pick On Me,” these women dress up: wear short, short skirts to show off their thighs and buttocks, offer puzzled lips and candy kisses “that don’t mean a thing.” It’s a sort of thrill to let ones long hair fall against a man’s skin and feel him get excited, only to pull away because it’s an act. It’s also a dangerous game to play, depending on the guy your teasing, especially if a guy mistakenly thinks the teasing means the woman is playing hard to get but really wants it.

Their follow up single, “Don’t Tell Me What To Do“, had a Vaudeville sound like Sopwith Camel’s “Hello Hello“.

Their next single was the theme song from Riot on Sunset Strip. This was a 1967 low-budget counter-culture era movie filmed and released within six weeks of the actual late-1966 Sunset Strip Curfew Riots. The film attempted to capture the essence of the period around the Sunset Strip riot, and also added a subplot concerning a young girl’s troubled relationship with her divorced parents. Her dosage with LSD by a would-be seductor, the subsequent ‘acid trip’ she experiences, and her later discovery by a police sergeant as the victim of gang rape, were among the movie’s peak moments. The Standells performed their non-charting single, “Riot On Sunset Strip”, written for the film.

In 1967 they were featured on Art Linkletter’s House Party, debating moral majority broadcasting mogal Gordon McLendon who banned their recording “Try It”. McLendon deemed the songs lyrics to be obscene.

The Standells still actively perform in concert. They appeared at Game 2 of the 2004 World Series as well as the first game of the 2007 American League Division Series at Fenway Park in Boston where they sang the national anthem. Since the early 1990s “Dirty Water” has been the Red Sox unofficial anthem. More recently US performances include the Cannery Casino amphitheater in Las Vegas, the Hollywood landmark Amoeba Music, the EchoPlex, and the featured performers at the June Lake Loop Mountain Music Festival. Their 2010 six – nation European tour included performances in Madrid, Bordeaux, Rennes, Paris, London, Oslo, Berlin, Athens, and Frankfurt. In the summer of 2015 The Standells put together “The Dirty Water Tour”. It also included Mitch Ryder & the Detroit Wheels (“Devil With A Blue Dress”) Gary DeCarlo of Steam (“Na Na Hey Hey Kiss Him Goodbye”) Jimy Sohns of the Shadows of Knight (“Gloria”) and Johnny Echols of Love (“7 and 7 Is”).