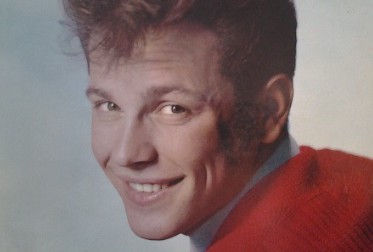 Bobby Curtola was born in Port Arthur, Ontario, in 1943. (The town would become amalgamated into the city of Thunder Bay in 1970). His cousin Susan Andrusco remembers “”Bobby would always be singing at our family gatherings. The family loved him. And he loved being the centre of attention. He would sing Oh My Papa, and my grandpa would cry.” Oh My Papa was a number-one hit for Eddie Fisher in January 1954, when Bobby Curtola was still ten-years-old. In the fall of 1959, sixteen-year-old high school student Bobby Curtola went from pumping gas at his father’s garage in Thunder Bay, Ontario, to the life of a teen idol. Within a year he went from playing in his basement band, Bobby and the Bobcats, to recording his first hit single in 1960, “Hand In Hand With You”, which charted in June ’60 in Ontario, but not in Vancouver.

After performing on the Bob Hope Show in 1960, the charismatic teenager, with his handsome boy-next-door looks was quickly finding himself within a whirlwind called “Curtolamania.”

Bobby set out on his first Western Canadian Tour in the fall of 1960. From there Curtola went on to become a trailblazer. He toured the first coast to coast tour circuit in Canada. In 1961 he went to Nashville to record with Bill Porter for RCA Studios. That relationship continued for decades. “Don’t You Sweetheart Me” was his first Top Ten hit in Canada. The song climbed to #1 in Winnipeg, #4 in Vancouver and #5 in Toronto. In September 1961 Curtola was back on the CFUN chart in Vancouver with “I’ll Never Be Alone Again”. He had another hit on his hands four months later with “Hitchhiker“.

Between 1960 and 1968 Curtola had continual single and album releases on the Tartan label in Canada. The managers and main songwriters were brothers Dyer and Basil Hurdon. The Del-Fi label released some of those singles in the US. His biggest hit, “Fortune Teller”, was released in 1962 and went Gold in Canada. The now Rock n’ Roll Hall of Fame DJ, Red Robinson, was key in the success of “Fortune Teller.” Seeing its potential internationally, Robinson sent it to Disc Jockey’s in Seattle at KJR and Hawaii’s KPOI in Honolulu. A major US record deal was signed and “Fortune Teller” went on to sell two and a half million copies.

Curtola traveled to many towns in British Columbia, including the Vancouver Island town of Ladysmith on April 7, 1962, while “Fortune Teller” and “Johnny Take Your Time” were charting all over the province. 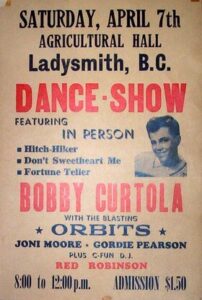 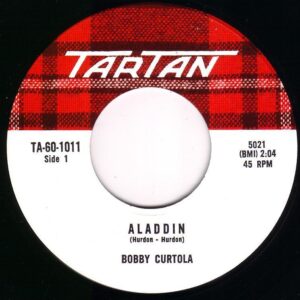 In “Aladdin”, Bobby Curtola sings a song about a popular Arabian tale of Aladdin and his magic lamp. In the original story told by Syrian Marionite writer and storyteller, Hanna Diyab (born in Aleppo, Ottoman Empire in 1688) – Aladdin is an impoverished young man, dwelling in one of the cities of China. He is recruited by a sorcerer from the Maghreb (present day Morocco, Algeria, Libya and Tunisia), who passes himself off as the brother of Aladdin’s late father, Mustapha the tailor, convincing Aladdin and his mother of his good will by pretending to set up the lad as a wealthy merchant. The sorcerer’s real motive is to persuade young Aladdin to retrieve a wonderful oil lamp (chirag) from a booby-trapped magic cave. After the sorcerer attempts to double-cross him, Aladdin finds himself trapped in the cave. Aladdin is still wearing a magic ring the sorcerer has lent him. When he rubs his hands in despair, he inadvertently rubs the ring and a jinni (or “genie”) appears and releases him from the cave, allowing him to return to his mother while in possession of the lamp. When his mother tries to clean the lamp, so they can sell it to buy food for their supper, a second far more powerful genie appears who is bound to do the bidding of the person holding the lamp. The story was translated and published in French in Paris in 1709 by translator Antoine Galland.

When Bobby Curtola sang about Aladdin in 1963, it was to tell of a teenage boy’s dream about meeting Aladdin. And in the dream the boy – who is not dating anyone, seeing Aladdin with his lamp, makes a wish. This results in the boy meeting a girl who tells him she cares and lets him hold her in his arms. Now, the boy wants to meet Aladdin in another dream, if only to thank the young man with the lamp for “showing him the light” and making the girl “mine.”

In 1963, Bobby Curtola had five songs climb into the Top Ten on CFUN in Vancouver. These were “Destination Love,” “Gypsy Heart“, “Indian Giver,” “Three Rows Over” and “Move Over“.

In 1963, Winnipeg’s Chad Allan & the Reflections (later the Guess Who) were introduced to Curtola. “We backed him on some Winnipeg dates and across Western Canada, all the way to Edmonton for Klondike Days and Calgary for the Stampede,” says guitarist Randy Bachman. “It was an opportunity for us to travel and promote our records. We had Shy Guy out at the time. At the Stampede we played the Teen Tent with him, sponsored by Coca-Cola. That was our first encounter with screaming girls who came to see Bobby every night. It was our taste of the rock ’n’ roll limelight. Bobby Curtola was a decent singer and performer and a nice enough guy who came along when Canadian teenagers were looking for their very own Elvis or Cliff Richard, and he filled that void. And he was very successful.”

In June of 1964, Bobby Curtola got to sing what would become an ear-worm for radio listeners across all radio and TV stations in the mid-sixties. He became the first pop singer to record a jingle that sounded like a Top 40 Hit Single. The jingle was “Things Go Better with Coke.” He signed an exclusive contract with Coca-Cola to be their #1 Spokesman. Bobby, also co-wrote “The Real Thing” which was used for the commercial “Coke’s The Real Thing.” After turning twenty-one, Bobby was interviewed by John Pozer on his TV show in Ottawa, Saturday Date, which ended with the pair toasting to his success with coke bottles. In the interview Curtola reveals that the jingle was made in Nashville and that Elvis’ former backup group, The Jordanaires, backed Curtola in recording the commercial.

2 responses to “Aladdin by Bobby Curtola”