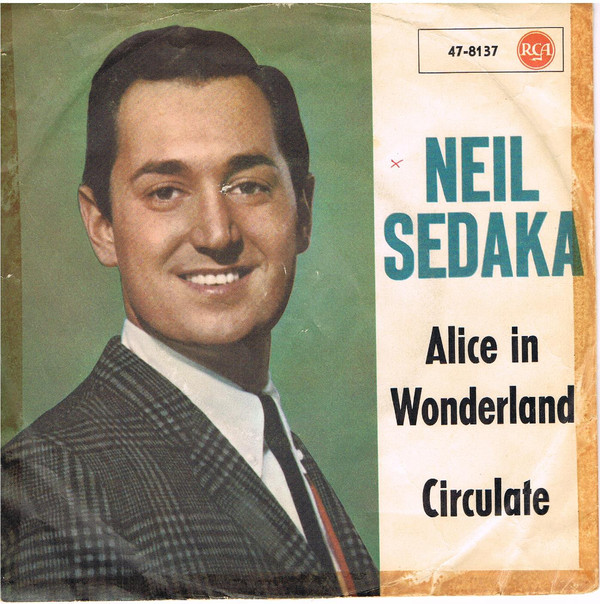 #190: Alice In Wonderland by Neil Sedaka

At Abraham Lincoln High School Sedaka began playing rock n’ roll in addition to his classical studies. He created a doo-wop group called The Tokens, who had a number one hit in 1961 called “The Lion Sleeps Tonight.” When he was 13 a neighbor heard Sedaka playing and suggested that he meet another teen with a musical ear down the street named Howard Greenfield. The two formed a songwriting partnership and between 1959-1963 achieved record sales of over 40 million. Next, Sedaka and Greenfield got contracts as songwriters with Don Kirshner and Al Nevins of Aldon Music. Aldon Music was one of the independent music companies in the Brill Building in Manhattan. Other singer-songwriters in the Aldon Music stable included Neil Diamond, Carole King, and Paul Simon. In the Brill Building a musician could find a publisher and printer, cut a demo, promote the record and cut a deal with radio promoters. Offering these services all inside one building was an advantage over other music companies where a recording artist had to go to multiple addresses to get these tasks completed. The Brill Building at 1619 Broadway, and the nearby 1650 Broadway building, (and to a lesser degree 1697 Broadway) grew to define the “Brill Building Sound” whose creative artists dominated the pop charts with their output, especially prior to the British Invasion.

At the age of 19, Sedaka and Greenfield had a Top 20 hit recorded by Connie Francis in 1958 called “Stupid Cupid”. She later recored the theme song for the theme song for the movie Where the Boys Are. Sedaka began releasing singles as a solo recording artist after he signed with RCA Victor. He was successful in the USA, but often even more successful on the charts in Vancouver. “Stairway To Heaven” peaked at #9 on the Billboard Hot 100 and #1 in Vancouver on April 2, 1960. In the summer of 1960 Sedaka released a  double-sided single “You Mean Everything To Me/”Run Samson Run”. Both singles climbed into the Top Ten with CKWX charting “You Mean Everything To Me to #5 and “C-FUN charting “Run Samson Run” to #3.

Other hits followed including “Happy Birthday Sweet Sixteen” which peaked at #1 in Vancouver and #6 on the Billboard charts in the fall of 1961. Earlier that year Sedaka had a string of number one hits in Vancouver with “Calendar Girl” (#4 on the Billboard Hot 100) and “Little Devil” (#11 on the Hot 100). 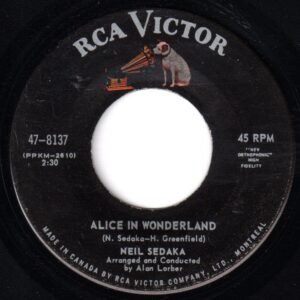 “Alice In Wonderland” was cowritten by Neil Sedaka and Howard Greenfield. Howard Greenfield was born in Brooklyn, New York, in 1936. He met Neil Sedaka while the boys were teenagers. They both lived in in an apartment building in the Brighton Beach neighborhood of Brooklyn. They began having songs they cowrote recorded in 1956. The Sedaka and Greenfield songwriting team wrote “Where The Boys Are” for Connie Francis, and numbers of hit records for Neil Sedaka including Happy Birthday Sweet Sixteen”, “Calendar Girl”, “Stairway To Heaven”, “Run Samson Run“, “Star Crossed Lovers” and “Sunny“.

In addition, Howard Greenfield also wrote “Venus In Blue Jeans” for Jimmy Clanton, “Your Used To Be” for Brenda Lee, “Breakin’ in a Brand New Broken Heart” and “My Heart Has a Mind of Its Own” for Connie Francis, “Crying in the Rain” for the Everly Brothers, “Love Will Keep Us Together” for the Captain & Tennille, “Foolish Little Girl” for the Shirelles, “Poor Little Puppet” for Cathy Carroll, and “It Hurts To Be In Love” for Gene Pitney. Howard Greenfield was openly gay and in a same-sex relationship from the early 60s until his death in 1986.

“Alice In Wonderland” draws superficially from the Lewis Carroll character, Alice In Wonderland. Born in a hamlet in Cheshire, England, in 1832, Charles Lutwidge Dodgson was better known by his pen name, Lewis Carroll, from 1856 onward. In 1865, Carroll published Alice’s Adventures in Wonderland. A young girl named Alice falls through a rabbit hole into a fantasy world of fantastic characters. The children’s novel is seen as a prime example of the literary nonsense genre. Among the characters Alice meets are Tweedle Dum and Tweedle Dee. The names pre-date Lewis Carroll’s sequel to Alice in Wonderland called Through the Looking Glass. From Lewis Carroll’s novels, the names Tweedle Dum and Tweedle Dee have since become synonymous in western popular culture slang for any two people who look and act in identical ways, generally in a derogatory context.

Just then flew down a monstrous crow,
As black as a tar-barrel;
Which frightened both the heroes so,
They quite forgot their quarrel

For the purposes of Neil Sedaka’s “Alice In Wonderland”, Tweedle dum, Tweedle dee become nonsense lyrics used as a catalyst to declare that Alice has made his life a fantasy. Elsewhere, Sedaka and Greenfield reference the Hatter who appears in the first novel at a Mad Tea Party, and characterized by switching places on the table at any given time, making short, personal remarks, asking unanswerable riddles, and reciting nonsensical poetry. But, in “Alice In Wonderland”, Sedaka declares that his heart is beating so fast that he’s “mad as a hatter.” Moreover, Sedaka wants Alice to take him to her “wonderland of love.” But in the novel we hardly encounter a wonderland of love, and more of disorientation.

In Carroll’s novel, Alice follows a rabbit down a rabbit hole where she suddenly falls a long way to a curious hall with many locked doors of all sizes. She finds a little key to a door too small for her to fit through, but through it, she sees an attractive garden. She then discovers a bottle on a table labelled “DRINK ME,” the contents of which cause her to shrink too small to reach the key which she had left on the table. She subsequently eats a currant cake labelled “EAT ME.” Immediately, Alice grows to such a large size that her head hits the ceiling. The chapter was the subject of Jefferson Airplane’s 1967 hit “White Rabbit”.

Sedaka was back in the Top 20 in 1963 with “Let’s Go Steady Again” and “Bad Girl”. Between these releases he was back in Vancouver’s Top Ten in the summer of 1963 with “The Dreamer“.

In 1964, with the arrival of the Beatles, The Rolling Stones, The Dave Clark Five, Herman’s Hermits, Petula Clark and other acts that were part of the British Invasion, Sedaka got crowded out of most AM radio playlists. Although, he did crack the Top 20 in Vancouver with “Sunny“.

As the British Invasion continued, Neil Sedaka turned to songwriting over much of the next decade. This included “Workin’ On A Groovy Thing”, a Top 20 hit for the Fifth Dimension in 1969. Earlier that year Neil Sedaka had a #1 hit in Australia that didn’t crack the Billboard Hot 100 back in his native USA. It became the #5 song of the year in Australia for 1969. The song, “Star Crossed Lovers”, also climbed into the Top Ten in Vancouver and made it to #8.

On August 26, 1976, Neil Sedaka performed in concert at the Pacific Coliseum in Vancouver.

On January 18, 1978, Neil Sedaka received a star on the Hollywood Walk of Fame. Though Elton John helped resurrect his career, Sedaka went with a different record label and it soured their friendship. In 1980 he released a duet with his daughter Dara which made the Top 30 in the USA. After 1980 Neil Sedaka released just nine singles into the 1990s. In 1982 Neil Sedaka published his autobiography titled Laughter in the Rain: My Own Story.

In an interview in 2017 Sedaka reported he’d had a fall in early June. It left him with a broken shoulder and rib. The Daily Mail reported “With his arm in a sling, he’s not so much laughing in the rain as grinning through the pain. ‘This is probably my last UK tour,’ he says. ‘I still love the songs, but the traveling is difficult.’”

References:
“Neil Sedaka Biography,” Neil Sedaka.com
Adi Gold, “Neil Sedaka: Israel is the Homeland: Pop music icon promises to be ‘bigger than Paul Anka’ in Tel Aviv concert. ‘After all, I’m One of Yours’,” Ynetnews.com, Rishon Lezion, Israel, October 3, 2010.
Neil Sedaka, Laughter in the Rain: My Own Story, (Putnam, 1982).
“Monday in Broadcast History .. January the 18th…,” Puget Sound Radio.com, January 17, 2021.
Graeme Thomson, “Elton John loved his songs so much that he rescued him from the recording wilderness. So why did Neil Sedaka, creator of Oh! Carol and Breaking Up Is Hard To Do, turn his back on his friend?,” Daily Mail, UK, June 10, 2017.
“Howard Greenfield,” New York Times, March 14, 1986.
Lewis Carroll, Alice’s Adventures in Wonderland and Through the Looking Glass, 1865 and 1871.
“C-FUNTASTIC FIFTY,” CFUN 1410 AM, Vancouver, BC, March 1963.

2 responses to “Alice In Wonderland by Neil Sedaka”