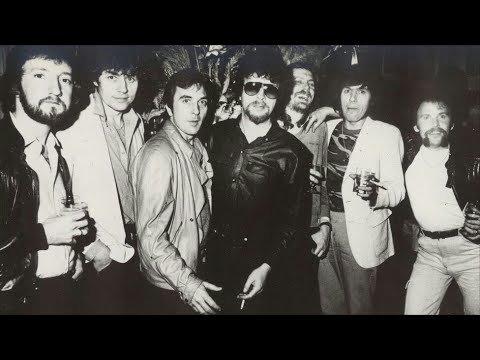 #282: All Over The World by Electric Light Orchestra

Peak Month: October 1980
11 weeks on Vancouver’s CFUN chart
Peak Position #2
Peak Position on Billboard Hot 100 ~ #13
YouTube.com: “All Around The World”
Lyrics: “All Over The World”

On February 4, 1976, ELO appeared in concert in Vancouver at the Queen Elizabeth Theatre. In the fall of 1976 ELO released A New World Record. In 1977, both singles, “Livin’ Thing” and “Telephone Line”, climbed to #2 in Vancouver. While a third single from the album titled “Do Ya”, stalled at #19. In the fall of ’77, ELO released their seventh studio album titled Out of the Blue. The debut single from the album, “Turn To Stone”, peaked at #2 in Vancouver in early 1978. While the second single release, “Sweet Talking Woman”, peaked in Vancouver at #2.

The next single release from the album was “Confusion“. In 1980 ELO was featured on the soundtrack for the film Xanadu. They were also in the film, along with Olivia Newton-John, Cliff Richard and The Tubes. The film featured the theme song “Xanadu” by ELO with Olivia Newton-John. It climbed to #5 in Vancouver and #8 on the Billboard Hot 100. Two other singles from the film, “I’m Alive” and “All Over The World” , made the Top Ten in Vancouver in 1980. 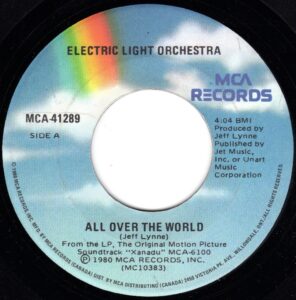 “All Over The World” was written by Jeff Lynne. The song celebrates having a party all over the world, including Detroit, London, Hamburg, Paris, Rome, Rio, Hong Kong, Tokyo L.A., New York, Amsterdam, Monte Carlo and Rotterdam. The party around the world anticipates that “Everybody gonna have a good time, everybody will shine till the daylight.”

One response to “All Over The World by Electric Light Orchestra”