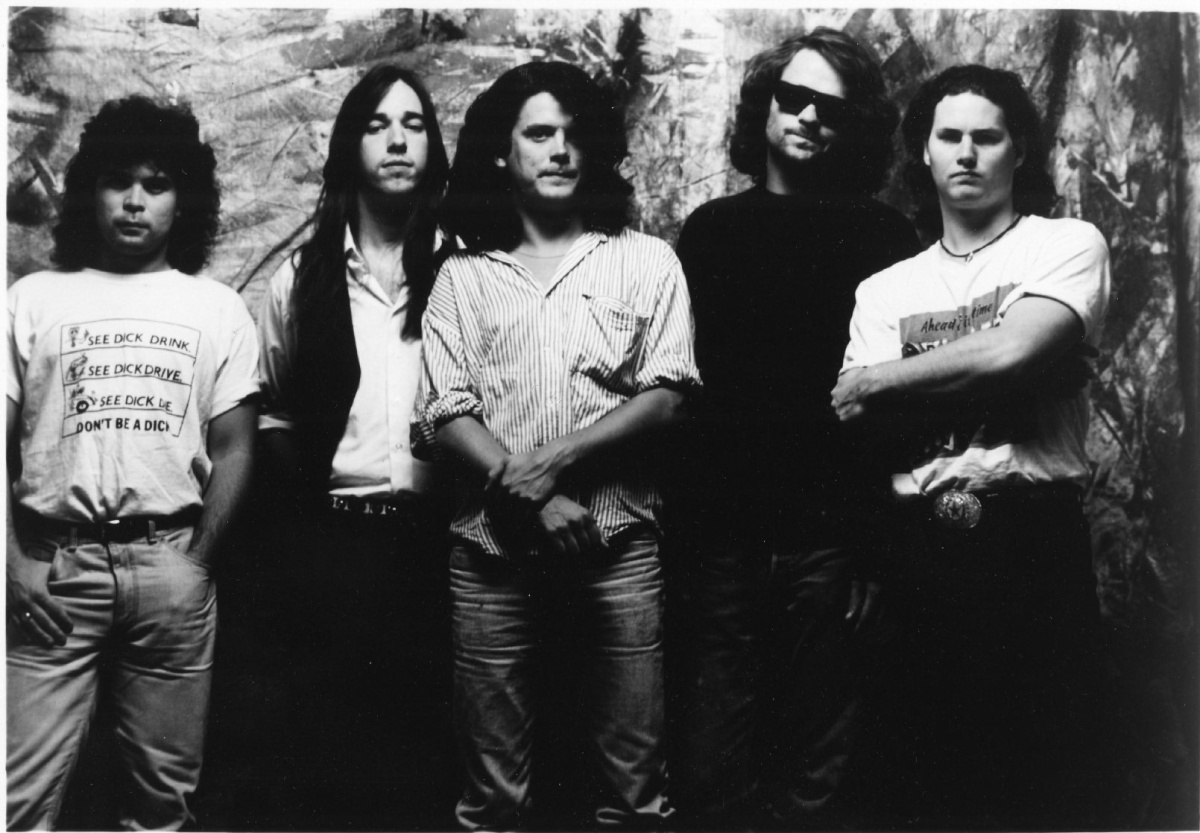 #1064: Boots or Hearts by the Tragically Hip

In 1989 the band released their first studio album, Up To Here. The Tragically Hip proceeded to release five singles from the album: “Blow at High Dough”, “New Orleans Is Sinking”, “Boots Or Hearts”, “38 Years Old” and “Trickle Down”.  The first four of these singles received respectable airplay across Canada. “New Orleans Is Sinking,” a fictional tale, got some airplay on mainstream rock stations in the USA.

Of the songs off their first studio album, “Boots Or Hearts” charted the best here in Vancouver. 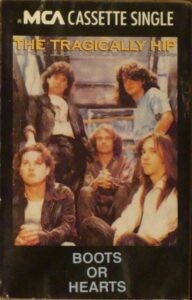 “Boots Or Hearts” is a song based on a simile. A simile is a figure of speech that directly compares two things that are seen to resemble one another. In this case a relationship has fallen apart. One person has returned home and the person they’ve been going out with won’t even return their phone call. The singer thinks of how quickly things can fall apart once they begin to unravel. Boots can lose their tread, and if not properly glued at the factory the boots can literally fall apart just sitting in a closet as the glue dries out. It seems that when it comes to boots, consumers don’t save money by purchasing cheaply made products. As a band from Kingston, Ontario, where the winters can last four months or more, The Tragically Hip knew the importance of reliable boots. What is not so easy to see from the outside is that the same applies to human hearts. In the song things have deteriorated to the point that neither one of them cares about each other, or the relationship.

In 1919 Irish poet, W.B. Yeats, wrote a poem called The Second Coming. In it he writes “things fall apart, the center cannot hold.” In his case, Yeats was thinking about the tarnished estimation of humanity in the aftermath of the First World War and sixteen million deaths. While the Tragically Hip are only singing about one relationship that went off the rails, we glimpse that falling apart watching the evening news. We sense how fragile things are as we hear stories of other couples who’ve broken off their relationship or filed for divorce.

In the world of personal coaching there is a conflict resolution model called the Pinch-Crunch Theory. When understood between two partners, the Pinch-Crunch Theory can be helpful as a way to raise early on small matters that could become bigger if not addressed. One person could say to their partner, “I’m feeling like there’s a pinch / issue / snag / bumpiness that exists. It’s not a problem, but I’d like to discuss it together. I’d like to use looking at this issue as a way to approach things going forward. Can we talk? If this isn’t a good time can we schedule some time that works for you?” Clearly, in the song “Boots Or Hearts”, the opportunity to bring up snags the couple can sort out more easily has passed them by. All they can agree on is that they no longer care. Though now things have unraveled to the point where phone calls go unanswered.

In 1991 the band released Road Apples which featured the hit singles “Little Bones”, “Twist My Arm” and “Three Pistols”. As part of their Road Apples Tour, the Tragically Hip had a five-night stand at the Commodore Ballroom in Vancouver from July 16th to 20th, 1991.

The Tragically Hip appeared in concert on December 2, 1992, at the PNE Forum. The band performed in Vancouver on July 17, 1993, on Seabird Island.

They released four more studio albums during the 1990’s. The band charted 16 songs into the Canadian RPM Top 30, including seven Top Ten hits such as “Courage“. In the mid-90s “Ahead By A Century” became their first #1 hit in Canada. They repeated their feat of getting a chart topping single in Canada with “In View” in 2006. Between 1990 and 2017, The Tragically Hip have received sixteen Juno Awards in Canada for a range of honors including Best Single, Best Rock Album and Group of the Year.

The songs “Gift Shop” and “Poets” climbed to #4 on the Canadian RPM singles charts in 1996 and 1998. In 1999, the band had a #3 hit across Canada with “Bobcaygeon”. “Courage (for Hugh MacLennan)” was the first of fifteen singles to crack the RPM Top Ten on either the Pop chart or the Canadian Alternative/Rock chart. The final song to crack the Top Ten nationally was in 2016 with “In A World Possessed By The Human Mind”.