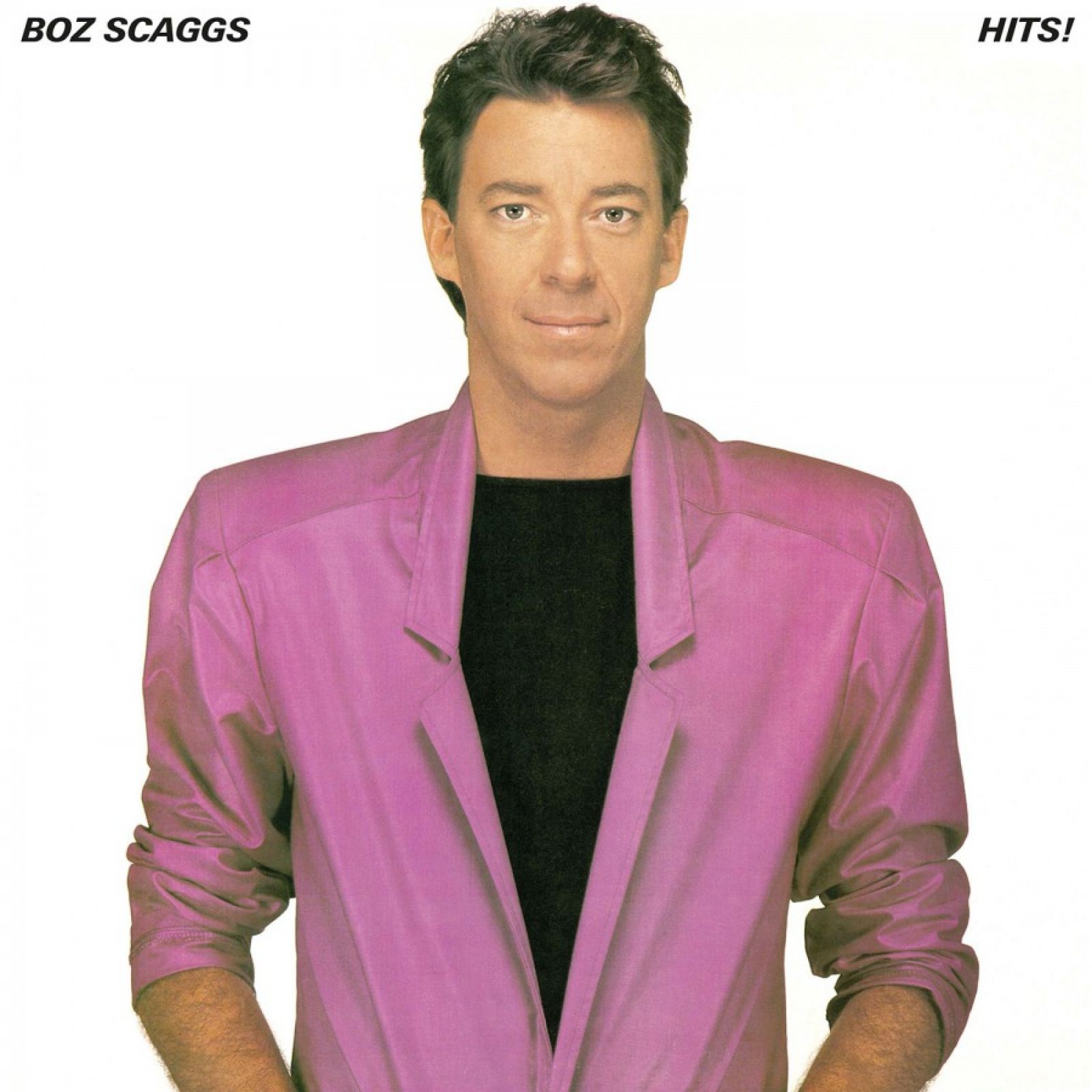 #99: Breakdown Dead Ahead by Boz Scaggs

William Royce “Boz“ Scaggs was born in 1944 in Canton, Ohio, 60 miles south of Cleveland. His father was a traveling salesman, and the family moved to Oklahoma and next to Texas. While attending a private school in Dallas, Scaggs met Steve Miller while he was 12-years-old. Scaggs was learning to play guitar and was invited to join Miller’s band the Marksmen. In 1961-62 Boz Scaggs joined Steve Miller’s band the Ardells while the pair were studying university in Madison, Wisconsin. Scaggs followed Miller to Chicago in ’62-’63. Then he went to London and Sweden to perform as a solo artist in concert. While in Sweden, Boz Scaggs released his debut album, Boz, in 1965. The album only sold in Sweden and soon went out of print.

Scaggs moved to San Francisco and joined the Steve Miller Band in 1967. As a bandmate, he was at the recording sessions for the Steve Miller Band’s first two albums in 1968. That year Scaggs released his second solo album, Boz Scaggs. It included session musicians Duane Allman; tenor saxophonist on Aretha Franklin’s “Respect”, “I Never Loved A Man (The Way I Love You)” and “I Say A Little Prayer”, among others  – Charles Chalmers; trumpeter with the Bar-Kays on “Soul Finger” Ben Cauley – and later on “Respect Yourself” for the Staple Singers, among others. However, Boz Scaggs did not sell well. Yet, in 2012 Rolling Stone listed the album at #496 on its ranking of 500 Greatest Albums of All Time.

Between 1971 and 1976 Boz Scaggs went to the recording studios with Columbia Records. He released four albums in four years. There was no hit single from any of these albums. But in 1976 Boz Scaggs released Silk Degrees. The album soared to #2 on the Billboard 200 Album chart. A track from the album, “Lowdown”, won a Grammy Award in 1977 for Best R&B Song. It was a #3 hit in the USA. Another track from the album was “Lido Shuffle“. Many of the session musicians on Silk Degrees ended up forming a new band named Toto. They who went on to have million-sellers including “Africa” and “Rosanna”.

Late in 1977 Boz Scaggs released his eighth studio album, Down Two Then Left. Neither of the two singles from the album cracked the Top 40. While the album eventually sold platinum in the USA, it stalled at #11 on the Billboard 200 Album chart. Scaggs was back in the recording studio to work on Middle Man. The album produced two Top 20 hit singles: and “Jojo” and “Breakdown Dead Ahead”. 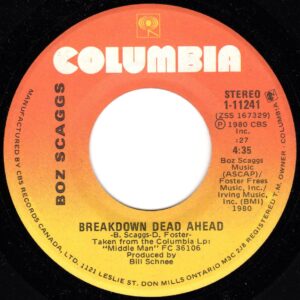 “Breakdown Dead Ahead” was cowritten by Boz Scaggs and David Foster. Born in 1949 in Victoria, British Columbia, when he was 13-years-old, David Foster enrolled in the University of Washington music program. In 1965, he auditioned to lead the band in an Edmonton nightclub owned by jazz musician Tommy Banks. Banks mentored Foster in jazz, producing records, and the music business. After a year there, he decided to move to Toronto to play with Ronnie Hawkins. In 1966, he joined a backup band for Chuck Berry. In the late 60’s, Foster was also in a backup band for Bo Diddley. In 1971 David Forster formed Skylark. The band had a modest hit in Vancouver in 1972 with “What Would I Do Without You“. And in 1973, Skylark had a Top Ten hit titled “Wildflower”. Foster moved to Los Angeles in 1974. He was a session musician in 1974 for Ringo Starr’s number-one hit “No No Song”; for two of George Harrison’s albums in the mid-70’s; Rod Stewart’s number-one hit in 1976 “Tonight’s The Night” and “You’re In My Heart”, “Hot Legs” and “I Was Only Joking”; Dolly Parton’s “Here You Come Again” (1977); Glen Campbell’s number-one hit in 1977 “Southern Nights”; Olivia Newton-John’s “Deeper Than The Night” and “A Little More Love”; Alice Cooper’s “How You Gonna See Me Now”; and Earth, Wind & Fire’s “Boogie Wonderland” and “After The Love Has Gone”. For the latter song, Foster was co-writer and received three Grammy Award nominations. “After The Love Has Gone” won for Best R&B Vocal Performance by a Duo or Group. In 1980, David Foster was a session musician for Aretha Franklin’s 26th studio album, Aretha, and her #3 R&B hit “United Together”.

“Breakdown Dead Ahead” is a song about someone who is ending a dating relationship. According to the singer, the person calling it quits has “just run out on first offense.” The person calling it quits doesn’t have much staying power, or interest in sorting things out. Maybe they had reservations about getting involved from the start. For the guy who’s being dumped, “it don’t make no sense.” He asks his amor to “check your heart.” An emotional fit isn’t the way to resolve things.  He wonders if the person he’s dating isn’t “way above their head.” The gods of flight are taking over and things are breaking down between them.

Boz Scaggs took an eight year break from recording and returned to the studio to release Other Roads late in the summer of ’88. Also in 1988, Scaggs opened the San Francisco nightclub, Slim’s. He continued to be an owner of the club until it closed during the pandemic in 2020. Since 1988, Boz Scaggs has released nine more studio albums.

In the summer of 1998, Boz Scaggs went on tour as the opening act for Stevie Nicks. Early on the morning of December 31, 1998, tragedy struck the Scaggs family when Boz Scaggs 21-year-old son, Oscar, died of a heroin overdose. Oscar Scaggs had been in rehab treatment through most of 1998, and had been reeling since the death of his friend – 19-year-old Nick Traina (the son of novelist Danielle Steel) in 1997. In 2001 Scaggs was all ready for the release of his new album, Dig, on September 11. But then the attacks happened and the record company shelved its promotional plans. “The record label had an extensive publicity campaign set up and the budget was all paid for, the ads were paid for. Then came 9/11 and everything went out the window, of course. That’s the breaks. I was pretty disappointed. … I’m sorry it didn’t see the light of day.”

In 2003 his album But Beautiful topped the Billboard Top Jazz Albums chart. His 2013 album, Memphis, has been his most commercially successful album since Middle Man in 1980. In 2015, Scaggs album, A Fool To Care, climbed to #1 on the Billboard Top Blues Albums chart. In October 2017, Boz Scaggs home in the Napa Valley burned to the ground in the wildfires. And in 2018 Boz Scaggs most recent album, Out Of The Blues, also climbed to the top of the Billboard Top Blues Albums chart. Given his personal experiences of the loss including in the 1998 death of his 21-year-old son to heroin overdose – and his home lost to fire in the Napa Valley in 2017 – Boz Scaggs knows the blues firsthand.

In 1981, David Foster was a session musician on the number-one hit for Patti LaBelle and James Ingram titled “Baby Come To Me”; and “Let’s Groove” for Earth, Wind & Fire; and “The Girl Is Mine” for Michael Jackson & Paul McCartney in 1983; And “We’ve Got Tonight” for Kenny Rogers & Sheena Easton. In 1982 he co-wrote and produced “Hard To Say I’m Sorry”, a number-one hit for Chicago. He was a session musician for Stevie Nicks’ #5 hit in 1982 titled “Stand Back”. In 1983, Foster won a Grammy Award for Best Show Cast Album for Dreamgirls: Original Broadway Cast Album. In 1983 Foster produced Lionel Ritchie’s album Can’t Slow Down. In 1985 Can’t Slow Down won a Grammy Award for Album of the Year. In 1985, Foster won a Grammy Award for Best Arrangement, Instruments and Vocals with his arrangement of “Hard Habit To Break” by Chicago. Foster also wrote another hit that year for Chicago titled “You’re The Inspiration”.

In 1997, Foster won a Grammy Award for producing Celine Dion’s album Falling Into You. He won a second Grammy Award that year for arranging Natalie Cole’s cover of “When I Fall In Love”. In 2008, Foster won a Grammy Award for producing Michael Buble’s Call Me Irresponsible and again in 2011 for Buble’s Crazy Love. Both were in the category for Best Traditional Pop Vocal Album. Over the years David Foster has won 16 Grammy Awards, and received an additional 31 Grammy nominations. He has been nominated three times for an Academy Award for Best Original Song. As well, Foster has received three nominations for Best Original Song at the Golden Globe Awards. He won in 1998 for “The Prayer” by Celine Dion and Andrea Bocelli.