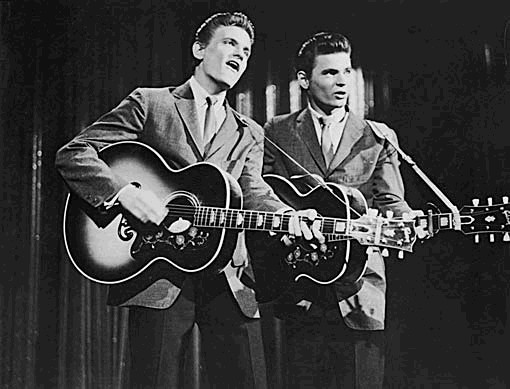 #109: Claudette by the Everly Brothers

Felice and Boudleaux Bryant wrote “Bye Bye Love”. They wrote other hits for the Everly’s including “Wake Up Little Susie”, “Bird Dog”, “Problems”, “Take A Message To Mary” and “All I Have To Do Is Dream”. The Everly Brothers began to pen many of their own songs.

After recording “Wake up Little Susie,” Don and Phil embarked on a 78-city tour that began on September 6th and ran through the 24th of November, 1957. They shared the stage with Chuck Berry, Buddy Knox, The Drifters, Paul Anka, Fats Domino, The Crickets, and Eddie Cochran. Their tour included a concert date at the Georgia Auditorium in Vancouver on October 23rd. In 1957 and 1958 the Everly Brothers toured extensively with Buddy Holly and The Crickets. After “Wake Up Little Susie” the Everly Brothers released “This Little Girl Of Mine”.

1958 was another banner year for the Everly Brothers. They had number one hits with “All I Have To Do Is Dream” and “Bird Dog”. The B-side of the first number-one hit in 1958 was “Claudette”. 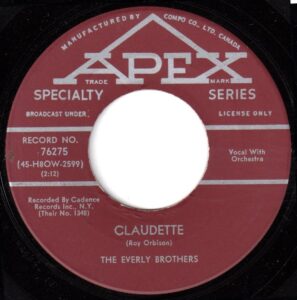 “Claudette” was written by Roy Orbison. Raised in Vernon, Texas, Roy Kelton Orbison was born in 1936. When he turned six his dad gave him a guitar. Both his dad, Orbie Lee, and uncle Charlie Orbison, taught him how to play. Though his family moved to Forth Worth for work at a munitions factory, Roy was sent to live with his grandmother due to a polio outbreak in 1944. That year he wrote his first song “A Vow of Love”. The next year he won a contest on Vernon radio station KVWC and was offered his own radio show on Saturdays. After the war his family reunited and moved to Wink, Texas, where Roy formed his first band, in 1949, called The Wink Westerners. Orbison had his first hit record in 1956 tited “Ooby Dooby”. Switching to Monument Records in 1959, his first Top Ten hit was “Only The Lonely”, followed by “Blue Angel”, “Crying”, “In Dreams”, “Dream Baby”, “It’s Over”; And his number-one hits “Running Scared” and “Pretty Woman”. Orbison was later a member of the supergroup the Traveling Wilburys.

Orbison refers to Claudette as a “pretty little pet” who “never make me fret.” The Everly Brothers give an energetic treatment of the song, letting listeners know the guy is hung up, out of breath, and on fire for Claudette:

Well I’m a lucky man my baby treats me right.
She’s gonna let me hug and kiss and hold her tight.
When the date is over and we’re at her front door.
When I kiss her good night I holler, “More, more, more”

The Everly Brothers had a double-sided Top Ten hit single with “Bird Dog” and “Devoted To You”. They wrapped up the year back in the Top Ten with “Problems”. The B-side, “Love Of My Life“, also charted into the Top Ten in Vancouver.

In 1959 Don Everly wrote “(Till) I Kissed You”, and later “So Sad (To Watch Good Love Go Bad)”. The brothers biggest hit, “Cathy’s Clown”, was one they co-wrote in 1960. “Cathy’s Clown” became their third number one hit, and The Beatles based the harmonies from “Cathy’s Clown” to write “Please Please Me”. Additionally, Phil Everly wrote “When Will I Be Loved”.

On February 18, 1962, the Everly Brothers appeared on The Ed Sullivan Show and performed “Jezebel” and “Crying in the Rain” while dressed in their blue Marine Corps uniforms. It was their only appearance between October 1961 and the end of 1962 when they were stationed at Camp Pendleton in San Diego County. Their absence from touring and television appearances coincided with a decline in sales and interest in the Everly Brothers.

The dance craze – “The Twist”, “The Loco-Motion”, The Mashed Potato” and others, the surfing sound, the bossa nova and the British Invasion were on the ascendant. The Everly Brothers and many other recording artists from the late 50s struggled to adapt. Between 1963 and 1973 the pair released 30 singles. Of these, none made the Top 30 and only three made the Billboard Hot 100.

3 responses to “Claudette by the Everly Brothers”