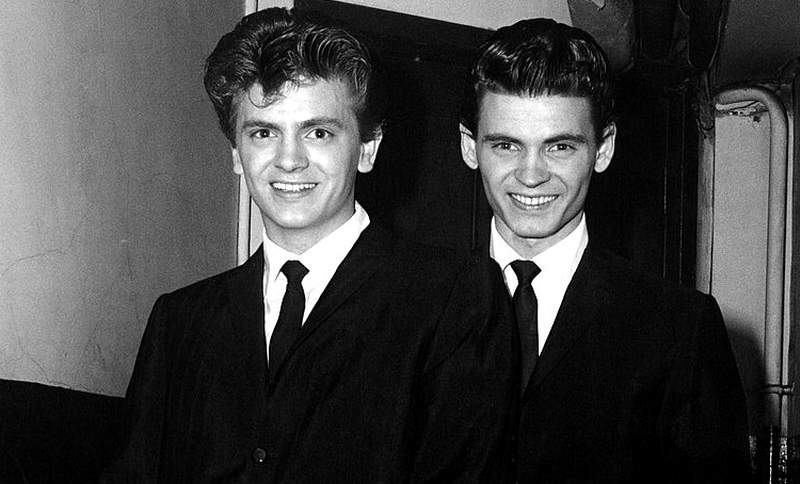 #292: Love Of My Life by the Everly Brothers

Felice and Boudleaux Bryant wrote “Bye Bye Love”. They wrote other hits for the Everly’s including “Wake Up Little Susie”, “Bird Dog”, “Problems”, “Take A Message To Mary” and “All I Have To Do Is Dream”. The Everly Brothers began to pen many of their own songs.

After recording “Wake up Little Susie,” Don and Phil embarked on a 78-city tour that began on September 6th and ran through the 24th of November, 1957. They shared the stage with Chuck Berry, Buddy Knox, The Drifters, Paul Anka, Fats Domino, The Crickets, and Eddie Cochran. Their tour included a concert date at the Georgia Auditorium in Vancouver on October 23rd. In 1957 and 1958 the Everly Brothers toured extensively with Buddy Holly and The Crickets.

In mid-October 1958, the Everly Brothers released a single titled “Problems”. The B-side, “Love Of My Life”, also charted into the Top Ten in Vancouver. 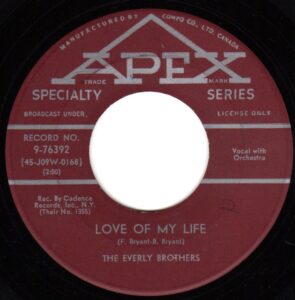 “Love Of My Life” was penned by Felice and Boudleaux Bryant. They wrote “Raining In My Heart” for Buddy Holly, and “Last Date” for Floyd Cramer. They also co-wrote “Love Hurts” which was introduced in December 1960 as an album track on A Date with The Everly Brothers, but was never released as a single (A-side or B-side) by the Everlys’. The first hit version of the song was by Roy Orbison who climbed the Australian pop charts to #5. They also wrote “She Wears My Ring”, a Top Ten hit in Vancouver for Jimmy Bell in 1961. And in 1961 they wrote “Private Eye” for Bob Luman.

Matilda Genevieve Scaduto was born in 1925. Boudleaux Bryant was born in 1920 in Shellman, Georgia. The two met in 1945 and eloped two days later. He nicknamed her Felice and the name stuck. She was 19 when they married. Boudleaux Bryant also wrote a number of songs on his own including “Devoted To You” for the Everly Brothers in 1958, and a Top Ten instrumental hit titled “Mexico” for Bob Moore in 1961.

“Love Of My Life” is a song about the yearning for one’s romantic partner to make a commitment. The narrator of the song sings “Love of my life come close to me. Say you will always be true. Our love must be, sweet destiny…” The beloved is told that only their lips can satisfy, and the way they thrill so completely makes the narrator’s “hungry arms long for your charms…” Although the lyrics don’t tell us, hopefully the the feelings were mutual.

In 1959 Don Everly wrote “(Till) I Kissed You”, and later “So Sad (To Watch Good Love Go Bad)”. The brothers biggest hit, “Cathy’s Clown”, was one they co-wrote in 1960. “Cathy’s Clown” became their third number one hit, and The Beatles based the harmonies from the song to write “Please Please Me”. Additionally, Phil Everly wrote “When Will I Be Loved”.

On February 18, 1962, the Everly Brothers appeared on The Ed Sullivan Show and performed “Jezebel” and “Crying in the Rain” while dressed in their blue Marine Corps uniforms. It was their only appearance between October 1961 and the end of 1962 when they were stationed at Camp Pendleton in San Diego County. Their absence from touring and television appearances coincided with a decline in sales and interest in the Everly Brothers.

The dance craze – “The Twist”, “The Loco-Motion”, The Mashed Potato” and others, the surfing sound, the bossa nova and the British Invasion were on the ascendant. The Everly Brothers and many other recording artists from the late 50s struggled to adapt. Between 1963 and 1973 the pair released 30 singles. Of these, none made the Top 30 and only three made the Billboard Hot 100.

4 responses to “Love Of My Life by the Everly Brothers”