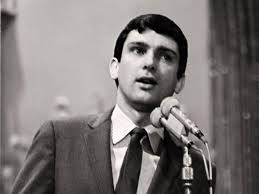 He was signed up with to songwriter Aaron Schroeder’s new label, Musicor, in 1961, Pitney scored his first chart single, which made the Top 40, the self-penned “(I Wanna) Love My Life Away”, on which he played several instruments and multi-tracked the vocals.

Next, Gene Pitney scored a #5 hit on CFUN with “Town Without Pity” in the winter of 1961. He followed up in the spring of 1962 with “(The Man Who Shot) Liberty Valance”, which peaked at #4. The song shares a title with a 1962 John Ford western with the same title, The Man Who Shot Liberty Valance, starring John Wayne. However, Gene Pitney’s “Liberty Vallance” wasn’t used in the film due to a publishing dispute between Famous Music and Paramount Pictures.

In 1962, Pitney’s highest-charting hit in the USA, “Only Love Can Break a Heart”, was kept out of the #1 position by The Crystals recording of Pitney’s composition, “He’s A Rebel”. And in the spring of 1963, Gene Pitney had his highest charting song in Vancouver titled “Mecca”. (It would later be equalled in 1964 with “I’m Gonna Be Strong”.) The next single release was the double-sided “True Love Never Runs Smooth”/”Donna Means Heartbreak”. “Donna Means Heartbreak” was one of the tracks from Pitney’s second album, Only Love Can Break a Heart. It was released with True Love Never Runs Smooth. The later was the hit in the USA and Donna Means Heartbreak didn’t get airplay south of the border. However the song was part of a two-sided hit on the Vancouver pop charts. Only Love Can Break A Heart, the album, featured three other hits “Half Heaven, Half Heartache”, “True Love Never Runs Smooth” and” (The Man Who Shot) Liberty Valance”.

The lyrics for “Donna Means Heartbeark” were co-written by Hal David, half of the team of Hal David-Burt Bacharach, and by Paul Hampton. Hampton had earlier been a co-writer with Hal David on “Sea of Heartbreak” for Don Gibson.  Hal David had other hits to his credit by 1963 including “Johnny Get Angry” for Joanie Sommers and “Don’t Make Me Over” for Dionne Warwick. David would later have credits for penning “The Look of Love” for Sergio Mendes & Brasil ’66, “What’s New Pussycat” (Tom Jones) and “Raindrops Keep Falling on My Head” (BJ Thomas).

“Donna Means Heartbreak” concerns a guy who discovers the very name Donna connotes for other guys beauty, heaven and ecstasy. However, for the singer she means heartbreak. This is understandable as we learn that Donna has been running around with every other boy in town just when her boyfriend thought she was his. It seems he’s the last one to figure this out. Lyrically, the song echoes the sentiment in the #1 hit for Dion in 1961, “Runaround Sue”. Together, with “True Love Never Runs Smooth” as the other double-sided hit on the Vancouver pop charts, “Donna Means Heartbreak” peaked at #6 despite not cracking the Billboard Hot 100. The only radio markets in the USA where “Donna Means Heartbreak” charted well were at #12 in San Bernardino, California and Milwaukee, Wisconsin. The song also manage to break into the Top 20 at #18 in Los Angeles and at #20 in Seattle.

With the eye-popping headline from Dublin, “It’s Hell Since I’ve Fallen in Love With a Slut,” The Independent featured an advice piece in December 2004. A 28-year-old guy has been dating a woman who is 25. He laments that he is still in love with her despite her sleeping around. Then, as if in a waking dream, he concedes: “One problem though: She was, and still is, living with a guy whom she claims to love, but whom she continually cheats on once she has drink in her. She is a compulsive flirt, and messes with her hair all the time, wanting all the guys to look at her. I get angry when she does this. In fact, I feel she does it just to make me angry. It’s working. She means the world to me – but of late, things have gone from bad to worse. I’ve done loads of things to try to get back in her good books. On her birthday, she hated me with a passion, but I still went ahead and bought her a birthday present. She wasn’t one bit appreciative. The following week, a relative of hers died and I attended the funeral. When I approached to sympathize, she turned to stone, even though she wept in the arms of other friends.”

In the case of the guy writing about this unrequited love, it seems clear she’s not into him. In fact, she doesn’t like him and later in the article we learn that she’s told the guy in front of her friends that she hates him and that he’s a freak. Sometimes, the reason people are sleeping with other people, in addition to badmouthing them to their face, is to drive home the basic message: “get lost.” And for poor Gene Pitney, he’s also had Donna running around with every other guy in town. At some point, if he’s smart, he’ll ask himself: How do I want to be treated by someone I’m dating? If the behavior matches his expectations, he’ll be satisfied. If he feels manipulated, lied to and taken for granted, the longer he stays in that kind of relationship he’ll have to ask himself what he’s getting out of it, besides drama.

While he enjoyed a string of Top 40 hits in both Canada and the USA between 1961 and 1965, his star began to fade. Pitney was very much identified with the Brill Building sound and increasingly seen as a pre-British Invasion pop singer out of step with the times. One of the Top 20 hits Pitney enjoyed in Vancouver in 1964 was “Who Needs It”, and another was “Hawaii”. Pitney tended to get better chart runs in Vancouver than in his native home in America. Another song that did very well for him here on the Canadian West Coast was a psychedelic tune in 1968 titled “Animal Crackers (In Cellophane Boxes)”. Also in 1968, “She’s A Heartbreaker”, reached #16 on the Billboard charts and #5 in Vancouver. After that Gene Pitney faded from view, at least in North America.

In 1974, he had a #2 hit with a song called “Blue Angel” in Australia. This was not a remake of Roy Orbison’s “Blue Angel” from 1960. Pitney’s last hit on the UK charts came in 1989, after an absence of 15 years, when he and Soft Cell singer Marc Almond recorded a duet version of “Something’s Gotten Hold of My Heart” by British writers Roger Cook and Roger Greenaway. The song had been a #5 hit for Pitney in 1967. Pitney’s duet with Almond brought him his first #1 hit in the United Kingdom, in January 1989. The single remained at the top for four weeks, and also went to #1 elsewhere in Europe.