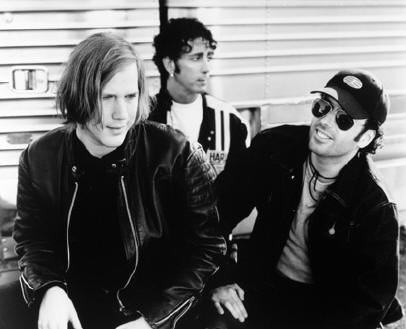 Norman Jeffrey Healey was born in 1966 in Toronto. He was adopted and at age one lost his eyesight due to a rare cancer of the eyes. At age three he began to play guitar with the instrument on his lap, and attend a school for the blind. At age nine Healey appeared on a children’s show on TV Ontario. In 1980 he began hosting a jazz segment for the CBC after attending an open house for the broadcaster where vibraphonist Peter Appleyard convinced the people at the radio program Fresh Air to put the then-14-year-old Healey on the air after discussing jazz with him. Young Jeff showcased his extensive collection of 78RPM records – about 10,000 at the time- and musical knowledge. By age 15 Jeff Healey formed a band called Blue Direction.

On July 27, 1985, Jeff was invited to join Albert Collins and Stevie Ray Vaughan on stage at Albert’s Hall, an iconic blues club in Toronto. Then in September 1985, Jeff first met drummer Tom Stephen. The pair decided to form a band, and later got introduced to bass player Joe Rockman at legendary Toronto blues club, Grossman’s Tavern. The trio of musicians became the Jeff Healey Band.

Tom Stephen was born into a Lebanese-Canadian family in Saint John, New Brunswick, in 1955. After getting an undergraduate degree in Nova Scotia, he moved to Toronto to attend York University to earn a graduate degree in urban planning. However, he soon found himself playing drums for a local blues band named Buzz Upshaw. Joseph “Joe” Rockman was born in Toronto on New Year’s Day in 1957.

Tom Stephen recalled in an interview with Q104.3 FM in Toronto, “I met Jeff a couple times, and I sort of had the feeling that he had some issues in terms of getting around. But it wasn’t until that night at Grossman’s, he leaped out of his chair — ’cause he played [with the guitar] on his lap. … But he didn’t just sit there with the guitar on his lap; he could jump out of the chair, literally hold his guitar against his thighs, he jumped all over the room. Somehow he got on a chair, got on a table, knocked everything over, made it back to the chair, sat down. [He said into the mic] ‘Goodnight. Don’t drink and drive. I know I don’t.’ And then he went back to this little room.”

While this was going on Tom Stephen was sitting at his drum kit and puzzled by what he was seeing in Grossman’s Tavern. He went over to speak with Jeff, where Healey asked him to join his band. Stephen said he wasn’t sure what was going on, so he was candid. Stephen recalls, “I said, ‘Well, I’d like to start a band with you, that’d be cool. But I’m just finishing a degree, I’m taking life seriously; we gotta have a plan. And by the way, man, you’re drinking a fair bit by the looks of things there.'”

“I said, ‘Man, you’re knocking everything over.'”

Healey also played trumpet and clarinet in Dixie bands, and was a fan of vintage jazz from the 1920s.

In 1986 the band released its first singles on an independent record label. In the summer of 1986 Vancouver was hosting Expo ’86, which featured many recording artists including B.B. King. Healey was asked to come backstage to do a jam with B.B. King and his band. This began a long friendship. And at the Commodore Ballroom in Vancouver (BC) on November 12th, the Jeff Healey Band opened a concert headlined by The Band.

The first few years they performed in concert about 300 times a year. In 1988 Jeff Healey began hosting a jazz program on the University of Toronto radio station CIUT. In 1988 they released an album titled See The Light. Internationally, the album charted into the Top 20 in New Zealand and Switzerland. The Jeff Healey Band flew to London, England, and performed to a sold out show at the Marquee Club. In attendance was musician Jeff Beck, who met the band backstage. And on network TV, the Jeff Healey Band appeared on the David Letterman Show on October 14, 1988. Subsequently, the appeared in February 1989 on The Tonight Show with Johnny Carson. And in February 1989 the Jeff Healey Band received a Grammy Award nomination for Best Rock Instrumental Performance for the song “Hideaway”. Then in April ’89, the Jeff Healey Band was filmed in London, UK, in a documentary titled See The Light: Live In London.

In early 1990 the Jeff Healey Band won a Juno Award for Canadian Entertainer of the Year. They were also nominated for two other Juno Awards. In 1990 the band released their second studio album, Hell to Pay. The lead single from the album was “I Think I Love You Too Much“.

In early 1991 a followup single, “How Long Can A Man Be Strong”, climbed into the Top 30 in both Vancouver (BC) and Hamilton (ON). That year Healey began hosting a CBC radio show titled My Kinda Jazz.

A third album, Feel This, was released in 1992. The Jeff Healey Band appeared for the third time on Late Night With David Letterman. On the Feel This album was a track titled “Lost In Your Eyes”. 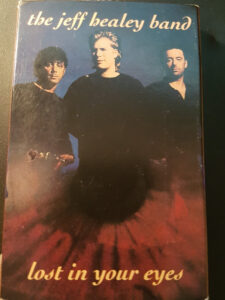 “Lost In Your Eyes” is a song written by Tom Petty. It was first recorded by the Merseybeat band the Searchers on their self-titled comeback album in 1979. Born in Gainesville, Florida, in 1950, Thomas Earl Petty was ten years old in the summer of 1961. That summer his uncle was working on the set of Elvis Presley‘s film Follow That Dream, in nearby Ocala, and invited Petty to watch the shoot. He instantly became a Presley fan, and soon acquired a collection of Elvis 45’s. But after seeing the Beatles on the Ed Sullivan Show, Petty was determined to make pop music his career. By the age of 17 he had dropped out of high school and formed his own band. By 1977 he formed the Heartbreakers, and was the frontman for the group. By the 2010s Tom Petty and the Heartbreakers had released over 18 albums. Their hits include “Don’t Do Me Like That”, “Refugee”, “I Won’t Back Down”, “Free Fallin'”, and “Learning To Fly”. Petty also had a Top Ten hit in a duet with Stevie Nicks titled “Stop Draggin’ My Heart Around”.

In 1988, Petty joined George Harrison‘s group the Traveling Wilbury’s. The other bandmates were Roy Orbison, Jeff Lynne of ELO and Bob Dylan. The Traveling Wilbury’s had minor hits with “The End Of The Line” and “Handle With Care“. Orbison died on December 6, 1988. The Traveling Wilbury’s continued for awhile releasing more material. After some time exploring a solo career, Petty reunited with the Heartbreakers and released an album in 1991 Into the Great Wide Open, produced with Jeff Lynne. In 1994 Tom Petty and the Heartbreakers had their last Top 40 hit on the Billboard Hot 100 with “You Don’t Know How It Feels”. In 1996 Tom Petty and the Heartbreakers released a soundtrack album titled Songs and Music from the Motion Picture “She’s the One”. From 1996 to 1999 Tom Petty had a heroin addiction. In 1999 the band had their last Top Ten hit on Billboard’s Mainstream Rock chart titled “Free Girl Now”.

On October 2, 2017, Tom Petty died accidentally from mixed drug toxicity. This was from a combination of opioids: fentanyl, oxycodone, acetyfentanyl and despropionyl fentanyl; sedatives: temazepam and alprazolam; and the antidepressant citalopram antidepressant. In a statement on his official website, Petty’s wife and daughter said he had a number of medical problems, including emphysema, knee difficulties “and most significantly a fractured hip.” Petty was prescribed pain medication for these problems and informed on the day of his death that his hip injury had worsened. The statement read, “[it] is our feeling that the pain was simply unbearable and was the cause for his overuse of medication…”

“Lost In Your Eyes” is a song describing the moment there was eye contact between two people that could have led to a romance. But, in this case, the person who was transfixed by the other person’s alluring eye contact, there was no follow up. All the narrator of the song can do in the aftermath of that enticing eye contact is wonder what could have been. They admit to being “sometimes” scared by the experience. Looking into the eyes of the other was like “light from a window, golden and bright.” Looking back, the narrator tells himself, “Doesn’t mean it had to ever mean a thing.” Just the same, when he recalls the woman he met he sings “baby, oh baby,” reflecting his lingering affection for her after their brief encounter.

Then in 1995 the Jeff Healey Band released an album of covers titled Cover To Cover. Among the tracks are covers of the Yardbirds “Shapes Of Things”, “Freedom” by  Jimi Hendrix, “Badge” by Cream. After the album was released, The Jeff Healey Band earned a Grammy Award nomination for Best Rock Instrumental Performance for the song “Shapes Of Things”.

In 1999 Jeff Healey In 2000 the band released their fifth studio album, Get Me Some. After the album Both Joe Rockman and Tom Stephen left the Jeff Healey Band, and the band disbanded in December 2001. Jeff Healey went back to the studio and released a solo album in 2002 titled Among Friends. This was the first of eight albums Healey released on his own or with the Jazz Wizards. Four of these were released posthumously.

In 2002 Healey formed the Jazz Wizards. Jeff Healey played one last concert in Goderich, Ontario, on February 2, 2008. He died at age 41 in March 2008 of cancer. Prior to his death he had recorded Mess Of Blues, which was released in mid-April 2008. Conflicts over the rights of the archival recordings of the Jeff Healey Band frayed the bonds between the remaining former bandmates and Healey’s widow, Cristie.

Tom Stephen published a memoir in 2018 titled Best Seat in the House: My Life in the Jeff Healey Band. In the book he describes many highlights outside the recording studio. These include Jeff Healey challenging ZZ Top to a bowling competition ― and winning; Bill Clinton inviting the band to the White House, and enjoying a special audience with Queen Elizabeth II. As well, the memoir details Healey’s interactions with Bob Dylan, George Harrison, Keith Richards, and others.