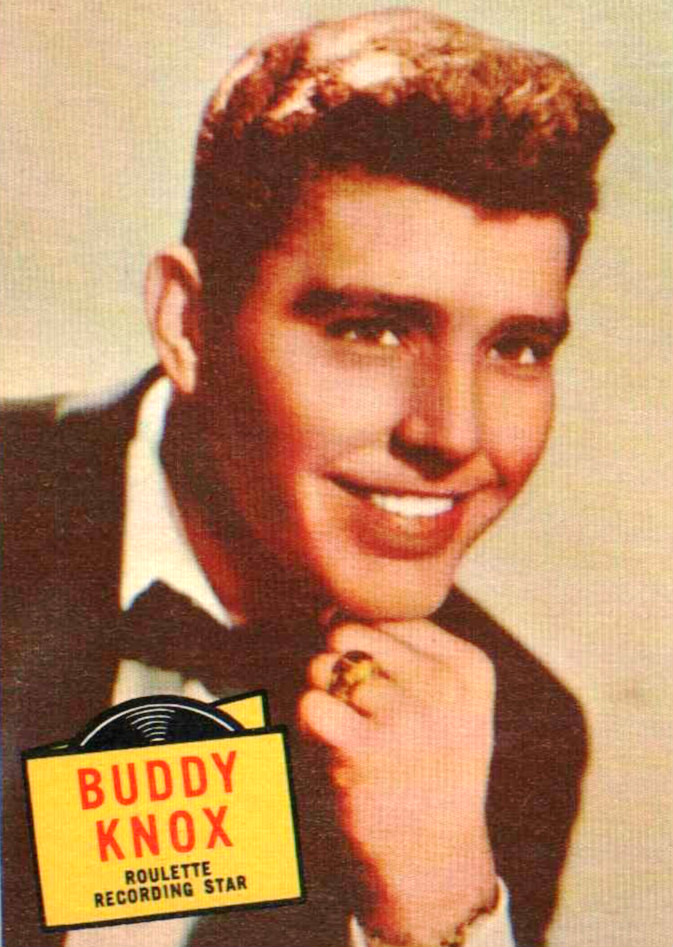 Buddy Wayne Knox was born in 1933, in Happy, Texas, a small farm town in the Texas Panhandle a half hour south of Amarillo. During his youth he learned to play the guitar. He was the first artist of the rock era to write and perform his own number one hit song, “Party Doll“. The song earned Knox a gold record in 1957 and was certified a million seller. Knox was one of the innovators of the southwestern style of rockabilly that became known as “Tex-Mex” music.

From that one session Buddy Knox would receive two gold records in 1957, one for “Party Doll” and the other for a song that Jimmy Bowen sang and co-wrote with Knox called “I’m Sticking With You.” “We didn’t know what we had just done,” Knox recalls, ” All we wanted to do was record our music and sell it around the college. This was just a fun trip for us.” “Party Doll” climbed to #1 in Vancouver (BC) and spent 12 weeks in the Top Ten. He had another #1 hit in Vancouver in June ’57 with “Rock Your Little Baby To Sleep”. In July ’57 Knox had another Top Ten hit on Red Robinson’s Teen Canteen chart with a track from his self-titled debut album, Buddy Knox, “Rock House”.

In the early 1960s Knox left Roulette Records and signed with the Liberty label. With this change Knox released several more mainstream pop records, featuring string arrangements and backing vocalists at the suggestion of producer Tommy “Snuff” Garrett. “Lovey Dovey” was his first release with Liberty. 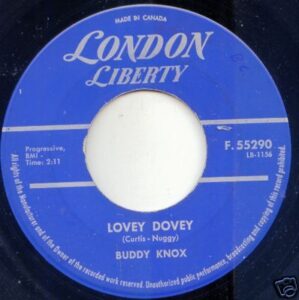 “Lovey Dovey” was written by Eddie Curtis and “Nuggy” (aka Ahmet Ertegün, the co-founder of Atlantic Records). Eddie “Memphis” Curtis, Jr. was born in 1927 in Galveston, Texas. In 1953 he wrote “It Should’ve Been Me”, a #5 R&B hit in the USA for Ray Charles in 1954. Curtis wrote other songs for Little Junior Parker, Don Cherry (“Wild Cherry” a #29 charting song in 1956), the Diamonds, Baby Washington, Connie Francis, Sammy Turner, Percy Mayfield and others.

Ahmet Ertegün was born in Istanbul, Turkey, in 1923. Growing up he learned to play a variety of string and keyboard instruments. He moved with his family to Washington D.C. in 1935 when he father was posted as the Ambassador for the Republic of Turkey to the United States. In that setting, Ahmet was able to go to concerts at African-American venues and hear recording acts that included Duke Ellington, Cab Calloway, Billie Holiday and Louis Armstrong. By the early 40s, Ahmet and his brother, Nesuhi, assembled a record collection of over 15,000 78 RPM records.

In “Lovey Dovey” the narrator is infatuated with someone and declares “I really love your peaches, want to shake your tree.” He sighs whenever his sweetheart comes near. When she kisses him it gives him a thrill, and he feels “high as a ceiling.” His thoughts are all about her and he can’t get her out of his mind. The singer confides “For you my darlin’ I would break my mama’s rule.” Presumably, his “mama’s rule” concerns the time he is expected to be back in his parents home.

“Lovey Dovey” was first recorded by The Clovers, a chart-topping R&B group who had 19 Top Ten hits between 1951 and 1956 on the Billboard R&B chart. “Lovey Dovey” was covered in 1954 by country singer Ella Mae Morse, and female rockabilly singer Bunny Paul. Clyde McPhatter cut a recording of the song in 1958 and charted it to #57 on the CKWX Sensational Sixty in Vancouver in March ’59. The Coasters released a cover in 1964, getting little attention during the year of Beatlemania. In 1967 Bunny Sigler covered the song, as did Otis Redding and Carla Thomas. In 1968 Johnny Nash gave “Lovey Dovey” a reggae treatment in a followup to his hit “Hold Me Tight”.

Knox followed up “Lovey Dovey” with “Ling-Ting-Tong”, another cover of a doo-wop group from the mid-50s – this time the Five Keys. Buddy Knox’s new sound captured on these recordings was a distinct departure from his earlier rockabilly work for Roulette. Knox’s recordings now sounded more similar to other mainstream pop artists of the time, like Johnny Burnette (“You’re Sixteen”) and Bobby Vee (“Rubber Ball”), especially with the introduction of strings.