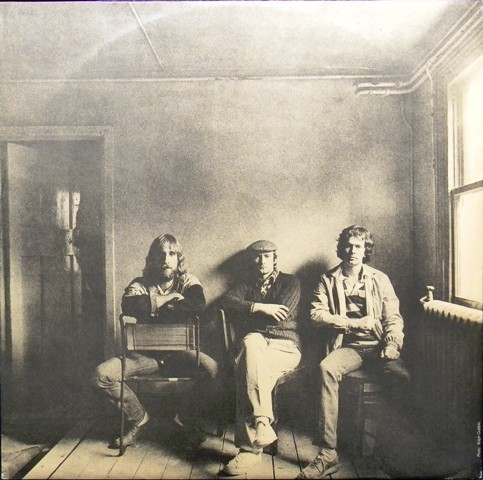 Genesis formed in Surrey, UK, in 1967. The band consisted of keyboard player Tony Banks, bass and guitar player Mike Rutherford, Phil Collins on drums and vocals, and Peter Gabriel as lead vocalist. Peter Gabriel left the band in the mid-70’s. However, with Gabriel’s departure, Phil Collins became the primary lead vocalists. The bands name was suggested by their producer, Jonathan King, of “Everyone’s Gone to the Moon” fame on the pop charts in 1965. King had earlier suggested the band go by the name of Gabriel’s Angels. Though the band initially adopted that name, they soon changed their name to From Genesis to Revelation. Soon, they shortened their name to Genesis. It was a band name that led to many possibilities, including a riff off of their name on their first album, Genesis to Revelation.

Band member, Phil Collins, chose to live in Vancouver for awhile, beginning in December 1978. Extensive touring with Genesis had created a strain in his marital relationship. When the marriage ended in April 1979, Collins returned to the UK.

By 1980, Genesis had released ten studio albums, two live albums and one extended play. In 1981, they released their album, Abacab, which included the hit single “No Reply At All”. 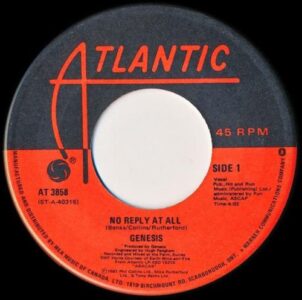 “No Reply At All” was written by the bandmates Rutherford, Banks and Collins. The song is about a one-sided relationship. One person it totally into the other person. They want to have conversation, dance, connect. But the partner looks right through them. The one who keeps moving toward the other complains “You never talk to me….You never look at me….You never dance with me…You’re never here with me.” In the face of many attempts to sustain the relationship, there is “no reply at all.” Meanwhile, the person who is freezing the other one out is too stubborn to say “you’re not the one I’m looking for.”

Abacab was the first album by Genesis to crack the Top 10 of the Billboard 200 album chart. While in the UK, the album was the seventh for Genesis to make the Top 10 UK album charts. While former Genesis bandmate, Peter Gabriel, had a hit in Vancouver in 1980 titled “Games Without Frontiers“. The fourth single from Abacab was “Man On The Corner”.

After the release of Abacab, the band went back to the recording studio and released their second extended play. It included another single titled “Paperlate“.

With the exception of “Misunderstanding”, which climbed to #14 on the Billboard Hot 100, by 1982, Genesis had failed to crack the Top 20. In 1983, their self-titled album included a single, “That’s All”, which made it to #6 on the Hot 100. But it was the release of the Invisible Touch album in 1986 that sent the band to the top of the charts. All five singles, including the title track, made the Top 5, and “Invisible Touch” made it to #1. In 1991, the band released the album, We Can’t Dance. Of the songs from the album, the single “I Can’t Dance” made the Top Ten in then USA and Canada. In 1992, another single from the album, “Hold On My Heart”, made it to #1 on the Canadian RPM chart.

After We Can’t Dance, Genesis waited until 1997 to release their final studio album, Calling All Stations. The album was a Top Ten hit across Europe. However, it didn’t crack the Top 50 on the album charts in the important American record market. Since that time, Genesis had released various compilation albums. Genesis has sold over 150 million records. In 2007, Genesis went on a world tour. While there has been talk in the press of a possible reunion tour, as of July 2018, it hasn’t transpired.

Concurrently, Phil Collins launched a solo career in 1981. His first hit single, “In The Air Tonight”, climbed to #2 on the Canadian RPM charts in 1981. His singles, “Against All Odds”, “Easy Lover”, “One More Night”, “Separate Lives”, “Groovy Kind Of Love”, “Two Hearts”, “Another Day In Paradise”, “I Wish It Would Rain Down”, “Something Happened On The Way To Heaven” and “Do You Remember?” all topped the RPM singles charts in Canada. Most of these topped the Billboard Hot 100, as did “Sussudio”. In 1996, Phil Collins had his last Top Ten hit in Canada titled “Dance Into The Light”.

In 2016, Collins published his memoir, Not Dead Yet. His first wife, Andrea Bertorelli, sued Collins in December 2015 over the way their relationship is described in his book. Between October 5 and 28, 2018, Phil Collins will be on a North American tour of 18 cities, including dates in Toronto and Montreal.

Tony Banks has released six studio albums and two soundtracks. Though none of his albums have sold especially well, Banks has enjoyed focusing more on orchestra composition. In 1985, Mike Rutherford took a break from Genesis and formed the band Mike & The Mechanics. Among their notable singles in the 80s are “All I Need Is A Miracle” and “The Living Years”. In 2014 Rutherford published the first memoir about Genesis in 2014 titled The Living Years:The First Genesis Memoir.