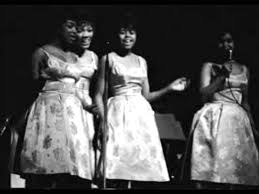 #728: Tonight’s The Night by The Shirelles

The Shirelles were a girl group that formed in 1957 in order to enter a talent show at their high school. The foursome were Shirley Owens, Beverly Lee, Addie “Micki” Harris and Doris Coley. Owens was born Shirley Alston Reeves in Henderson, North Carolina, in 1941. Harris was born in Passaic, New Jersey, in 1940. Lee was also born in Passaic, in 1941. Coley was born in Goldsboro, North Carolina, in 1941. Their performance at that 1957 high school talent show led to a record contract with Decca Records. In 1958 they had a minor hit titled “I Met Him on a Sunday”. It was written by the foursome. The song concerned a girl who meets a guy on a Sunday. She misses him the next day, goes out on a date with him on Wednesday, kisses him on Thursday. And by Saturday she says “bye bye baby.” Such were the fates of some teens in the late 50’s checking out if there momentary crushes were solid enough to go steady.
As the lead singer of the Shirelles was Shirley Owens, it is likely the group agreed to make their name from the first syllable in Shirley’s name. Did they consider the for a group name the Bevelles, the Dorelles or the Addelles? Five more singles were released by The Shirelles between 1958 and early 1960. Only one of these cracked the Billboard Hot 100. “Dedicated To The One I Love” peaked at #83 on July 13, 1959. The song was reissued two years later and peak at #2 in March 1961 on the Billboard Hot 100. The sixth single release after “I Met Him On A Sunday” was “Tonight’s The Night”. In “Tonight’s The Night” the naïve sound of The Shirelles contrasted with the sexual overtones of their lyrics: You say you’re gonna beg me/Turn the lights down low/You said you’re gonna make me/Feel all aglow. In 2004, Rolling Stone Magazine judged the mix of lyrics, vocals and instrumentation worthy of a ranking in their Rolling Stone Greatest Hits of All Time. “Tonight’s the Night” was ranked at #401 in that special edition of Rolling Stone Magazine. (This was later revised to 409thbest song in a 2011 update of the list). In 1960, American record buyers were took little notice of the tune and it peaked on their national pop charts at #39. However, in Vancouver, “Tonight’s the Night” peaked at #3. The radio markets where the song charted into the Top Ten in the USA were to #1 in San Francisco, New Haven (CT) and Louisville (KY), to #2 in Nashville and Dallas, and to #3 in Los Angeles and Santa Barbara.

The Shirelles music often was accompanied with strings and a northern Brazilian musical sound called Baião. Rolling Stone Magazine remarked on the Latin syncopation in the song, together with a string arrangement in “Tonight’s The Night” resembled the 1959 hit by The Drifters, “There Goes My Baby”.

The success of “Tonight’s the Night” was a catalyst for The Shirelles to go on tour with other R&B artists, including Etta James and Little Richard. “Tonight’s The Night” was co-written by Shirelles lead singer, Shirley Owens, and Luther Dixon. Dixon was born in Jacksonville, Florida, in 1931. He was a member of a doo-wop group named The Four Buddies, that got their start in Baltimore in 1954. In the mid-50’s his songs were recorded by a number of R&B groups including The Crows, The Cues and Otis Williams And His Charms. Other recording artists who recorded a song penned by Luther Dixon include Nat King Cole, Little Willie John, The Ames Brothers, Perry Como, Jerry Lee Lewis, The Fontaine Sisters, Lloyd Price, Jackie Wilson, Bobby Darin, Gene Vincent, Joey Dee & The Starliters, Bobby Rydell, Gene McDaniels, Jerry Butler, King Curtis, Paul Revere & The Raiders, Aretha Franklin, The Platters and Dusty Springfield. He co-wrote “Why Baby, Why”, a #5 hit for Pat Boone in 1957. He co-wrote “16 Candles” for The Crests, a #2 hit for the group in 1959. Luther Dixon also wrote “Boys,” which was a B-side for The Shirelles and a track on The Beatles 1963 album Please Please Me. (Wikipedia and The Guardian claim Luther Dixon co-wrote “Doncha Think It’s Time” for Elvis Presley in 1958. However, according to Discogs.com, the song was actually co-written by Willie Dixon, Clyde Otis and Brook Benton).

In addition to Shirley Owens and Luther Dixon, Discogs.com lists several others who collaborated on the composition. These include Solomon Burke and Don Covay.

Pre-dating Motown Records, The Shirelles offered the music industry a template for making hits with an all-girl group sound, with an emphasis on girl. Instead of a gender neutral reference to male objects of desire or heartbreak, men in Shirelles songs were not referred to as “you,” but as “he.” Pitching their songs to female listeners, The Shirelles confessional style influenced numbers of female songwriters including Carole King and Joni Mitchell. This was a different sound from pre-rock n’ roll female acts like the McGuire Sisters and traditional pop sounds of female acts like The Chordettes. In their song, “Lollipop,” The Chordettes make clear, at least lyrically, that the boyfriend is a firework (as Katy Perry would sing decades later). Crazy way he thrills me, tell you why/Just like a lightning from the sky/He loves to kiss me till I can’t see straight/Gee, my lollipop is great.

However, the Chordettes tight, fast-paced harmonies in a major key on “Lollipop” distanced themselves from any apparent sexual subtext in the lyrics. If there was desire or vulnerability in the earlier recordings of The McGuire Sisters or The Chordettes, their exaggerated sense of innocence smothered any suggestiveness. The Shirelles, with “Tonight’s The Night changed that and Vancouver radio listeners were buying what The Shirelles were selling. In addition, The Shirelles were an African-American group that was pitched to a white audience. With the dawning of the Civil Rights era in America, The Shirelles were part of a new “color-blindness” that asserted that it didn’t matter what the color of your skin was. What mattered was your stage presence, vocal and musical abilities.

The Shirelles follow up hit, “Will You Love Me Tomorrow” was co-written by Gerry Goffin and Carole King. The song helped launch Goffin and King’s songwriting careers. It was co-produced by Luther Dixon. The song climbed to #1 on the Billboard Hot 100 on January 30, 1961. Yet, in Vancouver, that same month the song only climbed to #15 on CFUN and #16 on CKWX.

From the winter of 1960 until the spring of 1963 The Shirelles were at the peak of their popularity. They scored six Top Ten hits in the USA, including two #1 hits: “Will You Love Me Tomorrow” and “Soldier Boy.” They also had top ten hits with “Mama Said”, “Foolish Little Girl” and”Baby It’s You”. The latter was co-written by Burt Bacharach and Luther Dixon. Dixon was also on the credits for “Mama Said”, “Soldier Boy” and “Tonight’s The Night”.

However, with the arrival of the British Invasion and Beatlemania in 1964, The Shirelles were sidelined, along with many other American recording artists. Though they released over thirty more singles, only one made the Top 50 on the Billboard Hot 100. And 22 of these singles failed to crack the Billboard Hot 100. Adding to their troubles, The Shirelles found in 1964 that there was no money in the Greenburg Trust Fund in 1964. The fund had been established to protect the groups’ earnings. They got into a conflict with Scepter Records and eventually decided to remain until 1968. In 1968, Doris Coley left the group to raise a family, but returned in the early 70’s.

The Shirelles were able to cash in on the rock ‘n roll revival that started in the late 60’s as a reaction to psychedelic pop and hard rock. They came to the Pacific Coliseum in Vancouver in 1971 as part of a Rock ‘n Roll Revue that featured Bo Diddley and Chuck Berry. The Shirelles, The Dovells, Bill Haley and Bo Diddley were among those who performed. The concert ended in a riot when the headliner, Chuck Berry, didn’t come out to perform. The fire marshal didn’t want concert goers dancing so close to the stage and so the house lights were turned on. Then a riot broke out.

Addie “Micki” Harris died in 1982.  Doris Coley married several times and became Doris Kenner Jackson. She died of breast cancer in 2000 at the age of 58. Beverly Lee holds the trademark for The Shirelles. As recently as 2015 Shirley Alston Reeves (Shirley Owens) performed in concert. In 2011, a Broadway musical called Baby It’s You showcased the music of The Shirelles and the story of their discovery by music executive and songwriter, Florence Greenberg.