#98: Bad Case Of Loving You by Robert Palmer

In 1979 the album Secrets earned Robert Palmer a second Top Ten hit in France with “What’s It Take”. A second track from the album was “Bad Case Of Loving You”. 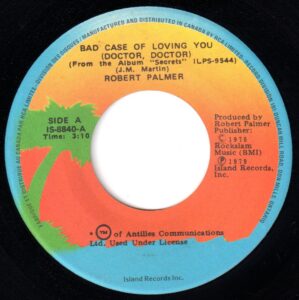 In “Bad Case Of Loving You”, Robert Palmer gives a simile for what it is like to be in love. Being in love is like having an ailment you need to get treated for by your personal physician. The guy described in the lyrics had come to recognize that he doesn’t need just a pretty face. Still, he’s got a sexual desire that is in synch with his girlfriend. “I know you like it, you like it on top. Tell me mama, are you gonna stop?”

But can he trust her? She has the “smile of Judas ” on her lip. In the Biblical story about Jesus of Nazareth, Judas Iscariot is one of the twelve disciples. He is the one who connives with the local authorities to hand over Jesus to be arrested. Judas identifies who Jesus is by kissing him. Jesus says, “must you betray me with a kiss?” There is no betrayal in the song lyrics. But, listeners are left with the possibility that things may go south. The guy is going to “knock on wood” to try to acquire some good luck to prevent the relationship from coming apart.

“Bad Case Of Loving You” was written by Moon Martin. John David “Moon” Martin was born in 1945 in southwestern Oklahoma. Martin attended the University of Oklahoma and later moved to Los Angeles with his band The Disciples which then became Southwind. Martin had immediate success playing with Hall of Fame artists Jimi Hendrix, Janis Joplin and Credence Clearwater Revival. He was later featured on guitars and vocals with rock legends Linda Ronstadt, Del Shannon, Glenn Frey, Don Henley and Michelle Phillips among others. Martin also gained recognition both in the United States and France as a solo artist and composer. He had a #2 hit in Vancouver in the fall of 1979 titled “Rolene”. Over the decades Martin released seven albums. In 2020 he died at the age of 74.

At the end of September 1980, Palmer released his sixth studio album Clues. The debut single from the album was “Johnny And Mary“. A second release from Clues was “Looking For Clues“.