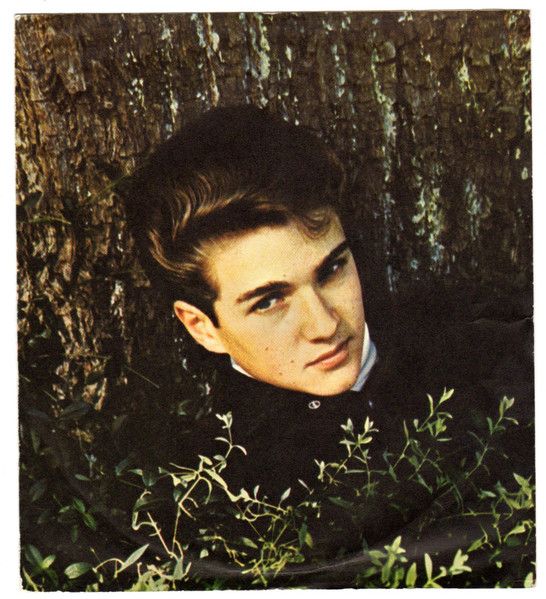 #127: Unless You Care/Can’t We Go Somewhere by Terry Black

Terrance Black was born in Vancouver in 1949. Local DJ, Red Robinson, has said about Terry Black: “Back in the British Invasion days, a young Vancouver singer took the city by storm. He was discovered by Buddy Clyde on Dance Party, a teen show on CHAN TV (now Global). Buddy was able to get the attention of the owner of Dunhill records, the same label that the Mamas and Papas recorded for as well as P.F. Sloan (Eve of Destruction) and others of the day.” Terry Black’s first single, “Sinner Man,” was a minor hit in Canada in 1964. His vocal style mimicked the sound of many male vocalists who were part of the British Invasion.

While he was fifteen years old, Black had a #2 hit in Vancouver with “Unless You Care”. His single was kept out of the #1 spot in September ’64 by Roy Orbison’s “Oh, Pretty Woman”. 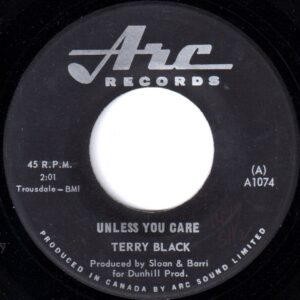 “Unless You Care” was written and produced by P.F. Sloan and Steve Barri. Two of the studio musicians on the single were Glen Campbell and Leon Russell, who both went on to have recording careers. The song was a major hit in Canada and also cracked the Billboard Hot 100 at #99. In Canada, Black was awarded the Male Vocalist of the Year award at the Maple Music Awards in 1964.

Philip Gary Schlein was born in New York City in 1945. His mom was born in Romania and his dad in the USA. The family moved to West Hollywood when Philip was twelve years old. His father was a pharmacist and had the family name changed legally since Philip’s dad was repeatedly denied a liquor license for his store. The new surname, Sloan, gave Philip’s dad no hassles and the family business thrived. In 1958 Philip was given a guitar as a present. Prior to being drafted into the US Army, Elvis Presley gave Philip Sloan a quick guitar lesson at a music store in Hollywood. By the age of 14 Philip Sloan’s nickname was “Flip,” a variant of Philip. So he became P (Philip) F (Flip) Sloan. At 16, “Flip” Sloan got a position as a songwriter with Screen Gems in Los Angeles. In addition to songwriting, Sloan teamed up with Steve Barri. The pair recorded several records hoping for a hit single. They failed at getting any notice when releasing singles under the names The Lifeguards, Themes Inc., The Rally-Packs and The Wildcats.

In the mid-60’s P.F. Sloan struck gold with his contributions as either a songwriter, backup singer or producer for Barry McGuire on “Eve Of Destruction”, The Turtles on “You Baby” and “Can I Get To Know You Better“, Jan and Dean on “The Little Old Lady From Pasadena”, “From All Over The World” and “Dead Man’s Curve”, Herman’s Hermits single “A Must To Avoid”, Johnny Rivers Top Ten hit “Secret Agent Man”, The Grass Roots debut single “Where Were You When I Needed You” and follow-up “Let’s Live For Today”, and The Mamas & The Papa’s #1 hit “California Dreamin'”. On most of these, Sloan collaborated with Steve Barri. In the midst of all these successes, PF Sloan decided to record one of the songs he wrote titled “Sins of the Family”.

P.F. Sloan tried to build on his marginal success with “Sins of the Family”, but was not able to get to a large audience. He released a series of solo albums over the years, and battled physical and mental illness. He died in 2015.

Steve Barri was born in Manhattan in 1942 with the birth name Steven Barry Lipkin. He became the vice-president of Dunhill Records around 1965. Barri was involved in signing several successful acts for the company, including Steppenwolf, Three Dog Night, Steely Dan, Smith, Jim Croce, The James Gang (with Joe Walsh), Jimmy Buffett, The Grass Roots, Rufus (featuring Chaka Khan), Hamilton, Joe Frank & Reynolds, and others. When he moved to Warner Bros. Records in 1976, Barri signed Prince, Christopher Cross, Van Halen, Ricki Lee Jones, Dire Straits and others. He also produced gold albums and #1 singles for John Sebastian (“Welcome Back Kotter”), Pratt & McClain (“Theme from ‘Happy Days'”) and Alan O’Day (“Undercover Angel”). Later in the 80s, Barri was with Motown, and also was an advisor for the film The Big Chill.

“Unless You Care” is a song conveying the view of someone in a dating relationship who urges that their steady date not say “I love you” unless they care. If the sentiment isn’t an honest reflection of what is felt by the dating partner, they don’t want to hear it. “Don’t put me in heaven, if I don’t belong up there.” With such a strong pull of attraction, hearing “I love you,” if it isn’t actually true is too much to bear.

The B-side to “Unless You Care” was “Can’t We Go Somewhere”. 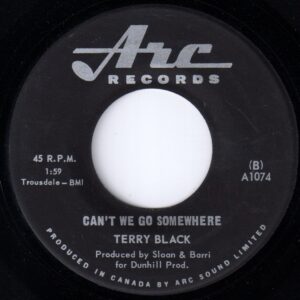 Terry Black performed “Can’t We Go Somewhere” on American Bandstand. Black’s appearance was sponsored by Angel Face medicated make-up, by Tootsie Roll, and by Spray Net. In “Can’t We Go Somewhere”, the singer urges that he and his date leave the crowd and “go home.” He has something to tell her in secret: “The way you look tonight, makes me feel the way I do.”  On further consideration, he says “anyplace will do” away from the crowd.

The B-side, “Can’t We Go Somewhere”, peaked at #2 in Vancouver, but didn’t chart elsewhere.

Both songs were included on Terry Black’s debut 1966 album titled The Black Plague. 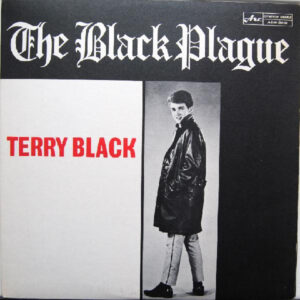 On the strength of his big his single “Unless You Care”, Terry Black became an opening act for a number of American and British recording artists on tour in the fall and winter of 1964-65. These included Lonnie Mack, Billy J. Kramer & The Dakotas and Gerry & The Pacemakers on the Canadian leg of their respective tours. Black also got noticed by Dick Clark and ended up appearing on American Bandstand. In 1965, Black recorded “Little Liar” – also penned by Sloan and Barri – which peaked at #4 in Vancouver and made the Top 20 in Halifax.

Black’s next covered, “Poor Little Fool”, a remake of Ricky Nelson’s #1 hit in 1958. His remake climbed to #23 on CFUN in Vancouver. Black was next inspired to record “Only Sixteen”. This was a remake of a hit R&B singer Sam Cooke. Cooke had charted “Only Sixteen” to #28 on the Billboard Hot 100 in 1959. Cooke’s recording stalled at #31 in Vancouver on CKWX. Black told Dick Clark on a repeat American Bandstand appearance that he chose to record “Only Sixteen”, since it hadn’t been taken. Sam Cooke had died tragically in December 1964 from a gunshot. A posthumous double-sided single release, “A Change Is Gonna Come“/”Shake,” was climbing the Vancouver pop charts in January 1965 and would peak at #5 in February. As a tribute to Sam Cooke, Black thought of recording “Wonderful World”. But Herman’s Hermits had recorded it before Black made it to the recording studio. And so he opted for “Only Sixteen” which peaked at #2 on CFUN in Vancouver.

Terry Black had another Top 20 hit in Vancouver with “Say It Again” in early 1965. The tune climbed to #6 in Calgary. In 1966 Black then moved to the U.S., and his remaining unreleased tracks were released in another Sloan-Barri produced album titled The Black Plague. That same year Terry Black released several singles. “Rainbow” made the Top 30 in Toronto and Vancouver in February ’66. His next release was titled “Baby’s Gone“. Black had a minor hit in 1967 titled “Wishing Star” which made the Top 30 in Calgary.

At the height of his popularity, Terry Black had a fan club. On some of his record sleeves it read:
For Fan Club Information Write:
ARC Sound Limited. 20 Cranfield Rd.,
Toronto 16, Ont.
Attn: Terry Black Fan Club

Under the name “Terence” he released the album An Eye for An Ear on Decca Records in the in America in 1969. The album was not released in Canada. Terry Black explored the possibility of being a film star, but becoming a Hollywood star never worked out and Black went back to Canada.

In 1969, Black was hired to join the cast for a Toronto production of Hair. In 1970, Black married Laurel Ward, who was part of the cast. From 1972 to 1982 Black and Ward released several singles. Their best result was the country-pop tune”Goin’ Down (On the Road to L.A.)” which peaked at #57 on the Billboard Hot 100. In 1971 Black and Ward joined the Canadian band, Dr. Music, and provided vocals on the band’s hits “One More Mountain To Climb” and “Sun Goes By.” In 1979, Black performed the song “Moondust” on the soundtrack for the movie Meatballs. Throughout the 1980’s Terry Black sang jingles for commercials and sang country music duets with his wife.

In the 2000’s, Black hosted an oldies radio show in British Columbia. He died in 2009, in Kamloops, British Columbia. An obituary included these words about Terry Black in his final decades of life. “…wherever he lived he translated the beauty around him into sculpture, paintings and song. In recent years he struggled with the effects of Multiple Sclerosis but he never lost his sense of humour, his fascination with nature, his creativity and his compassion for those whom he loved.”