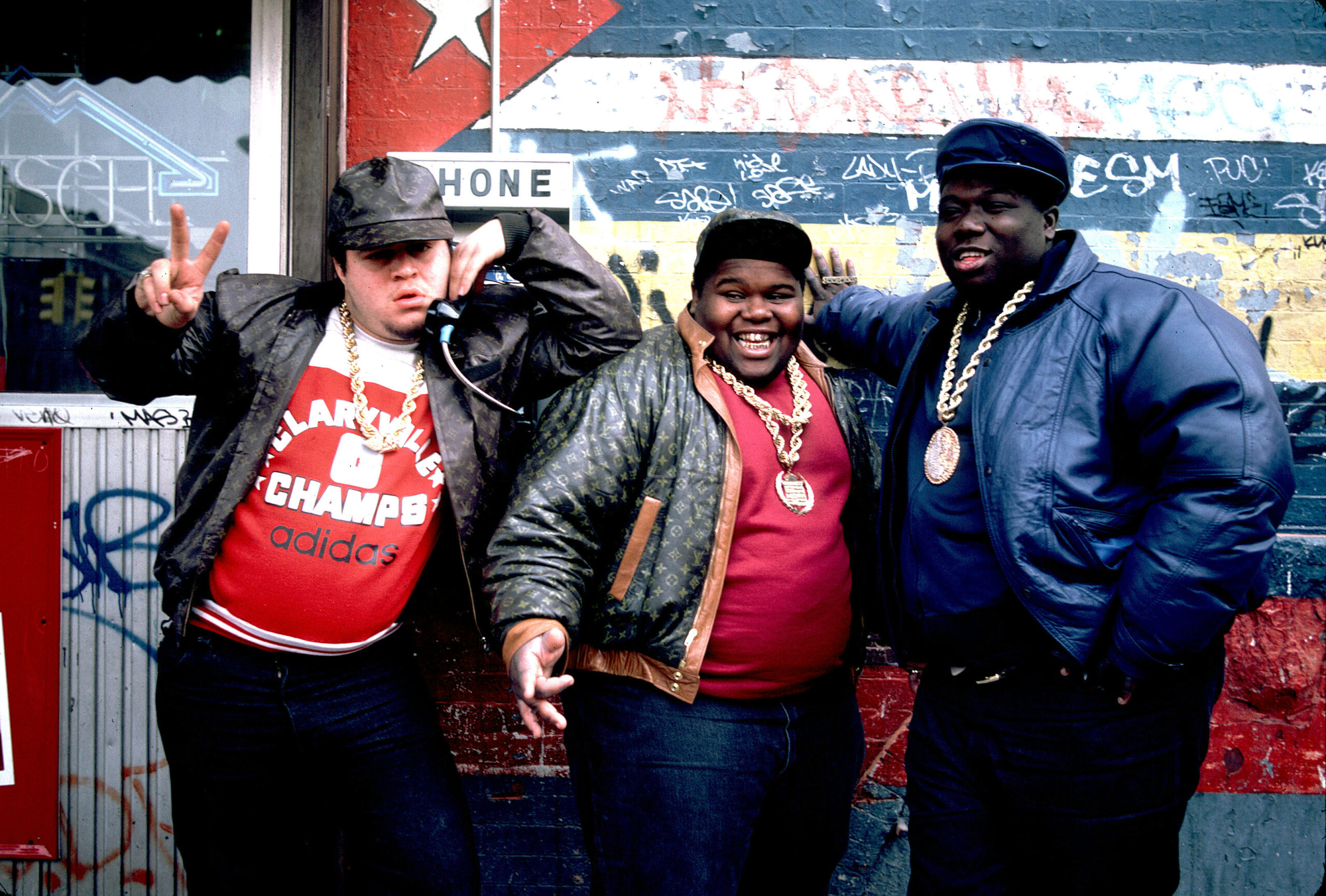 #286: Wipeout by the Fat Boys and the Beach Boys

Brian Wilson was born in Inglewood, California, in 1942. In biographer Peter Ames Carlin’s book, Catch a Wave: The Rise, Fall, and Redemption of the Beach Boys’ Brian Wilson, he relates that when Brian Wilson first heard George Gershwin’s “Rhapsody in Blue” it had a huge emotional impact on him. As a youngster, Wilson learned to play a toy accordion and sang in children’s choirs. In his teens he started a group with his cousin, Mike Love and his brother, Carl. Mike was born in Los Angeles in 1941 and Carl was born in 1946 in Hawthorne, California. Brian Wilson named the group Carl and the Passions in order to convince his brother to join. They had a performance in the fall of 1960 at Hawthorne High School, where they attended. Their set included some songs by Dion and the Belmonts. Among the people in the audience was Al Jardine, another classmate. Jardine was born in Hawthorne in 1942. He was so impressed with the performance that he let the group know. Jardine would later be enlisted, along with Dennis Wilson to form the Pendletones in 1961. Dennis was born in Inglewood in 1944.

In 1963 the Beach Boys had hits with “Surfin’ USA”, “Surfer Girl”, “Be True To Your School” and “In My Room”. A Christmas-themed song “Little Saint Nick” made the Top Ten in Vancouver but missed the Billboard Hot 100 in the winter of ’63.

The group began 1966 with a #2 hit titled “Barbara Ann”, followed with “Sloop John B” and “You’re So Good To Me“, another double-sided hit that also peaked at #2. Other hits in ’66 included “Wouldn’t It Be Nice”, “God Only Knows,” “Good Vibrations”. That year the Beach Boys appeared in concert on August 18th at the Queen Elizabeth Theatre.

From 1967 onward, The Beach Boys chart successes were sporadic. However, they have continued to tour over the decades. Among their few Top Ten hits in Vancouver (BC) in the late 60s were “Do It Again”, “I Can Hear Music”. The band performed at the PNE Agrodome on February 3, 1968, and again on January 18, 1969.

On July 20, 1983, the Beach Boys gave a concert in Vancouver at the BC Place Stadium. Tragedy struck when Dennis Wilson, plagued with alcohol and drug addiction, drowned after he came out of rehab in December 1983. He was 39 years old.

Meanwhile, in 1983 a hip-hop group called Disco 3 renamed themselves the Fat Boys, as they were all very plump. Prince Markie Dee (born Mark Anthony Morales in Brooklyn in 1968), Darren “Buff Love” Robinson (born in South Carolina in 1967), and Damon “Kool Rock-Ski” Wimbley made up the trio. Disco 3 had gone on a European bus tour, where their manager had told them to gain more weight. The concerts ended at twelve midnight, and they couldn’t get to the hotel until two in the morning. Only places like McDonald’s and  Burger King were open, so the group members gained weight from this.

In 1984 the Fat Boys released a self-titled debut album. It included “Jailhouse Rap” which peaked at #17 on the Billboard Hot R&B/Hip-Hop Songs chart. Several more albums followed in 1985 and ’86. And in 1985 the Fat Boys appeared in the musical-comedy film Krush Groove. The film also featured Run-D.M.C., Sheila E., The Gap Band, New Edition and LL Cool J.

The following year the Beach Boys were featured as backing vocalists on the Fat Boys cover “Wipeout”. The single was a track on the Fat Boys fourth studio album titled Crushin’. 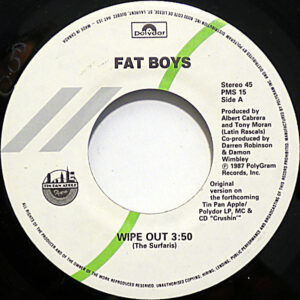 “Wipeout” is a song written and recorded by the California surf-rock band the Surfaris: Ronald Lee Wilson, Bob Berryhill, Pat Connolly and Jim Fuller. When the band recorded “Surfer Joe” in 1963, they learned they had to record a B-side to their single. With that invitation, Ron Wilson began to play an infectious drum solo, and Fuller on lead guitar, Berryhill on rhythm guitar and Connolly on bass guitar quickly improvised. As the recording began, before the music started, Bob Berryhill recalls “My dad went out in the alley and picked up an old cement soaked piece of plywood, came back in and we broke it over a microphone to sound like a busting surf board.” This was followed by a maniacal laugh and the words “Wipe Out” spoken by band manager Dale Smallin.

The band played what they improvised through three times. Jim Fuller had gone to Tijuana the previous week and suggested they call it “Switchblade”. Another suggested “Busting Surfboards”, but there was already a song with that title. Dale Smallin offered up a maniacal laugh and then said “Wipe Out”. Smallin’s laugh and spoken word ‘Wipe Out’, ended up being on the beginning of the song. And “Wipe Out” became the title of the B-side.

The Fat Boys were impressed with the success of Run-D.M.C.s cover of the Aerosmith song “Walk This Way”. So, The Fat Boys chose, with help from the Beach Boys, to cover “Wipeout” with rap lyrics. In their cover of the song, The Fat Boys sing about needing a vacation after three constant years of being on tour. They describe heading out west to California, with surfboards and beach balls packed in their limousine. Once the Fat Boys get to California they have fun on the beach, playing in the sand with the girls in bikinis, and making friends with beach boys. Then, at night, the Fat Boys meet the real Beach Boys.

In 1988, “Kokomo”, a song penned by John Philips (formerly of The Mamas & the Papas), Scott McKenzie (who had a #1 hit in Vancouver (BC) in June 1967 titled “San Francisco”), and the Beach Boys Mike Love, climbed to number one on the Billboard Hot 100. The Beach Boys achievement ended a 22-year drought in the number one spot for the group. That year the Beach Boys performed in Vancouver at Expo Theatre on July 24th.

In 1989 the Fat Boys disbanded, as Prince Markie Dee went solo. Dee produced the debut Top Ten hit for Mary J. Blige in 1991 titled “Real Love”. He also wrote and produced “Do You Think Of Me”, the B-side to Mariah Carey’s number-one hit “Dreamlover” in 1993. His 1992 album Free included a Number One hip-hop hit with “Typical Reasons (Swing My Way).” Later, Prince Markie Dee was a DJ at WMIB in Miami, and later had hosted The Prince Markie Dee Show on SiriusXM’s Rock the Bells station.

After the Fat Boys split up, Darren “Buff Love” Robinson found himself mixed up in a scandal in 1993. He was accused of filming a 14-year-old girl while she was sexually abused in August 1990 at a party in the suburbs of Philadelphia. Robinson was fined $10,000. In 1995, according to Wikipedia, weighing 633 pounds (287 kgs) and standing only 5’4″, Darren Robinson died at the age of 28 of a heart attack. Though the Los Angeles Times reported Robinson was just 450 pounds.

On February 18, 2021, Prince Markie Dee died at the age of 52 of congestive heart failure. In 2020 it was reported that Damon “Kool Rock Ski” Wimbley had lost 175 pounds over the previous years and was weighing around 185 pounds. When Wimbley reached around 330 pounds and discovered that he couldn’t tie his shoe without breathing heavily, he told himself he must make a deliberate effort to go on a diet.