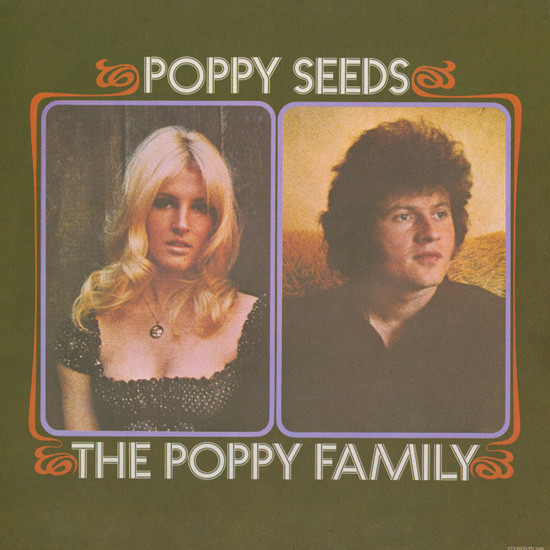 #252: I Was Wondering by the Poppy Family

Susan Pesklevits was born in 1948 in Saskatoon, Saskatchewan. When she was seven years old she was a featured singer on a local radio station. At the age of eight her family moved to the Fraser Valley town of Haney, British Columbia. When she was 13 years old she had her own radio show. In a December 1966 issue of the Caribou newspaper, the Quesnel Observer noted that Susan Pesklevits had auditioned for Music Hop in the summer of 1963 when she was only 15 years old. She had her first public performance at the Fall Fair in Haney when she was just 14 years old. It was noted she liked to ride horseback, ride motorcycles and attend the dramatic shows. Asked about what she could tell the folks in Quesnel about trends in Vancouver, Pesklevits had this to report, “the latest things in Vancouver are the hipster mini-skirts, bright colored suit slacks, and the tailored look. The newest sound is the “Acid Sound,” derived from L.S.D…. it is “pshodelic” which means it has a lot of fuzz tones and feed back. As an example, she gave “Frustration” recorded by the Painted Ship” a local band from Vancouver. Pesklevits added that on the West Coast “the latest dance is the Philly Dog. It mainly consists of two rows, one of girls and one of boys. The idea is to take steps, move in unison, while doing jerking motions and using a lot of hand movement.”

In the summer of 1966 Pesklevits formed a trio with Tom Northcott and Howie Vickers called The Eternal Triangle who released one single titled “It’s True“. Vickers went on to form The Collectors which later morphed into Chilliwack.

Terrence Ross Jacks was born in Winnipeg, Manitoba, in 1944. March 29, 1944, Winnipeg, Manitoba. During his career as a recording artist he became a household name and recognized as a singer, songwriter, record producer and environmentalist. His family moved to Vancouver in 1961 and he formed a band named The Chessmen along with local guitarist, Guy Sobell. The Chessmen had four singles that made the Top 20 in Vancouver, two which were double-sided hits. These included “Love Didn’t Die”, “The Way You Fell” and “What’s Causing This Sensation”, and Top Ten hits. Jacks met Susan Pesklevits who had him recommended to her by a friend who knew she was looking for a rhythm guitarist. Pesklevits needed a rhythm guitarist to help with her upcoming gig at the Elks Club in Hope, British Columbia, in early September 1966. They were married in 1967 and she became Susan Jacks. In 1967, along with Craig McCaw who had been a member of the Kelowna band The Shadracks, they formed a trio called Powerline. They changed their name to The Poppy Family and Craig subsequently sought out a young tabla player in Vancouver named Satwant Singh. Terry and Susan Jacks agreed to have Singh join The Poppy Family.

Their next single, “Which Way Is Going Billy?” went #1 in Vancouver in became an international hit. Terry Jacks won a Juno Award for this recording. The Poppy Family racked up numbers of Top 30 singles in Vancouver including local #1 hits “That’s Where I Went Wrong” in January 1970, and “I Was Wondering” in April 1971. 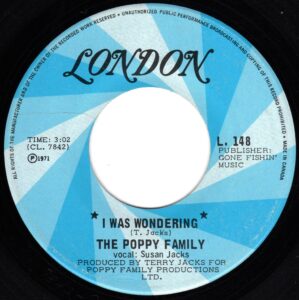 “I Was Wondering” was written by Terry Jacks. The song is about a love that died, and the narrator wonders if those involved cried when the love was drained out of the relationship? The narrator wonders about people smiling in the present, and recalls a past time when people smiled more easily. He asks “Why are all of them so sad today?” Wonderment turns to musing about “Why they’ve never won a war with hatred and a gun?” Why not win a war with love, which “brings together everyone?” Noting the stuck place the couple are in, with their love in ruins, the narrator wonders “What we’re going to do? I think it’s got to start inside of you. It’s got to grow and spread to others too.”

In the early 70s many in society were trying to get “in touch” with their emotions. And “I Was Wondering” is a song suggesting that staying in touch with one’s own emotions and responses to what is unfolding is key to making things hold together in a relationship.

“I Was Wondering” was a track from the group’s second album Poppy Seeds. By this time both Craig McCaw and Satwant Singh had left the band, and only Susan and Terry Jacks remained.

“No Good To Cry” was the third of six singles released on the Poppy Family’s second album, Poppy Seeds. It was a cover of the Connecticut band, the Wildweeds, 1967 regional hit. The Wildweeds song charted far higher in Vancouver (BC) than most radio markets in the USA. So it was a good bet for the Poppy Family to cover, pinning their hopes on another breakout hit in the USA. The singles from Poppy Seeds were released in 1971 and 1972 in the following order: “I Was Wondering,” “Where Evil Grows”, “No Good to Cry”, “I’ll See You There”, “Good Friends” and “I Thought of You Again”.

In fact, the lyrical trajectory of most of the subject matter released by the Poppy Family was brooding about relationships ending and regrets. “That’s Where I Went Wrong” finds a single woman asking if she can confide to the stranger beside her riding on a bus:
Cause the one that used to talk to me/well he don’t want me/See this ring? Tell me what’s it mean to you/Yeah, it’s pretty, but to me it just rang true/I’m so sorry for being such a bore/’Cause this ring and everything means nothing anymore.” And in “I Was Wondering” Susan Jacks asks: “I was wondering if you cried today/for the love that died here yesterday?/Tears are something people hide away…”

Susan Jacks went on to record over a dozen singles that charted on either the Canadian pop charts, the country or the Adult Contemporary charts in the nation. She was nominated for a Juno Award in 1974 for Best Female Vocalist, but lost out to Anne Murray. That same year Terry Jacks won the Best Male Vocalist, and was nominated again in 1975 (losing out to Gordon Lightfoot). In the midst of her string of hit singles she had a son and took a few years out of the music scene as a young mother. She married Canadian Football player Ted Dushinski in 1980. She won a Juno nomination for her single, “All The Tea in China”, in 1982, which charted best in Ottawa.

In 1983 Susan Jacks moved with her family to Nashville, Tennessee, and had a award winning country hit titled “Another Woman’s Man” in 1984. She became a staff songwriter in Nashville. After her husband died in 2004 after a cancer diagnosis, Susan Jacks moved back to Canada only to suffer kidney failure. Some years later her brother, Billy, donated a kidney for a successful transplant operation. More recently she has faced health challenges again with her kidneys.

Meanwhile, in 1974 Terry Jacks had an international hit titled “Seasons In The Sun”. Jacks released eight more singles though only one of these, “Christina”, made the local pop charts. He went to produce records for other recording artists including Nana Mouskouri, Valdy, George Jones and Buddy Knox.

After the mid-70s, Terry Jacks withdrew from the music industry. He got remarried, moved to Haida Gwai and became a father. In 1985 he formed Environmental Watch. Jacks also produced a number of documentary short films over the following decades on the environment with titles The Faceless Ones, The Tragedy of Clearcutting, The Southern Chilcotin Mountains and The Warmth of Love (The Four Seasons of Sophie Thomas).