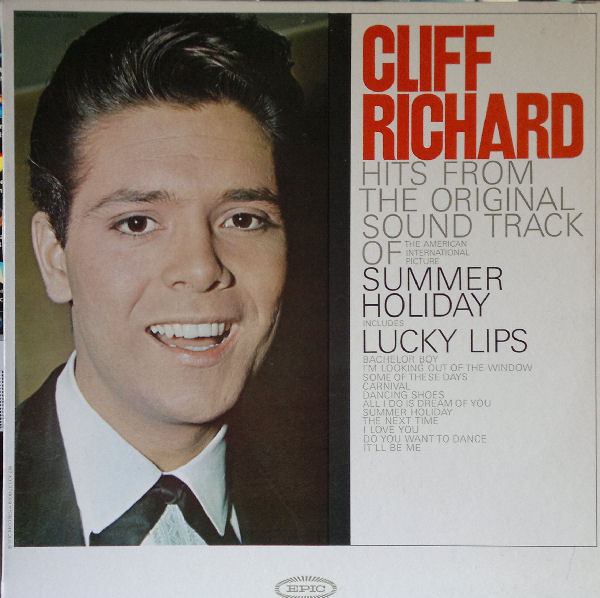 In 1963 Richard won the Best UK Male Singer in the NME (New Musical Express) Reader Poll. In Vancouver, Cliff Richard’s follow up hit to “Summer Holiday” was “Lucky Lips” and simultaneously “It’ll Be Me”. This was a #2 hit in the UK in 1962 and #7 in Vancouver in August ’63. While “Lucky Lips” climbed to #1 in Vancouver and #4 in the UK in the summer of ’63. Of the next eight singles after “It’ll Be Me”, seven made the Top Ten in Vancouver. One of these was “The Next Time”, and another was “Dancing Shoes”. 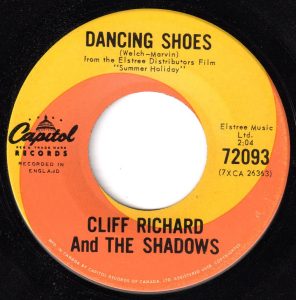 “Dancing Shoes” was a song featured in the Cliff Richard film Summer Holiday. In the film Cliff Richard is singing to a Yugoslavian maiden who is startled by the foreigners who are gallivanting in a cornfield. In the song Cliff Richard sings about Little Bo Peep. She was sad when she lost her sheep. So Cliff Richard told her to put on her dancing shoes, “and dance away your blues.” Similarly, Richard tells his audience that Humpty Dumpty was a “friend of mine” who fell off a wall. While Humpty Dumpty is lying on the ground in pieces, Cliff Richard tole him the solution to his predicament was to “put on your dancing shoes.” And Cliff Richard tells us he also knows Jack and Jill from Mother Goose nursery rhymes. After Jack falls down and breaks his crown, and Jill comes tumbling after, Richard tells them to “put on your dancing shoes.” There is no end to other potential subsequent verses – Little Miss Muffet who was frightened away by a spider who sat down beside her, could have put on her dancing shoes to shrug off her encounter with the spider. etc.

The earliest record of Little Bo Peep is found in a manuscript dated 1805. It contains only the first verse which references the adult Bo Peep , called ‘Little’ because she was short and not because she was young. There are references to a children’s game called “bo-peep”, from the 16th century, including one in Shakespeare’s King Lear  (Act I Scene iv), for which bo-peep” is thought to refer to the children’s game of peek-a-boo, but there’s no evidence that the rhyme existed earlier than the 18th century. The additional verses are first recorded in the earliest printed version in a version of Gammer Gurton’s Garland or The Nursery Parnassus in 1810, published in London by Joseph Johnson. The phrase “to play bo peep” was in use from the 14th century to refer to the punishment of being stood in a pillory. For example, in 1364, an ale-wife, Alice Causton, was convicted of giving short measure, for which crime she had to “play bo peep thorowe a pillery.” 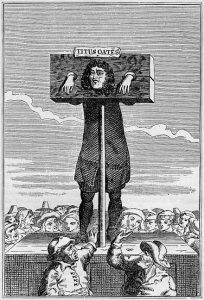 Above, 17th century perjurer in a pillory

Humpty Dumpty was the man who was egg shaped. In Lewis Carroll’s Through The Looking Glass, Alice in Wonderland meets Humpty Dumpty. Carroll writes: HOWEVER, the egg only got larger and larger, and more and more human: when she had come within a few yards of it, she saw that it had eyes and a nose and mouth; and, when she had come close to it, she saw clearly that it was HUMPTY DUMPTY himself. ‘It can’t be anybody else!’ she said to herself.” ‘And how exactly like an egg he is!’ she said aloud, standing with her hands ready to catch him, for she was every moment expecting him to fall. ‘It’s very provoking,’ Humpty Dumpty said after a long silence, looking away from Alice as he spoke, ‘to be called an egg — very!’ ‘I said you looked like an egg, Sir,’ Alice gently explained.

“When I use a word,” Humpty Dumpty said in a rather scornful tone, “it means just what I choose it to mean – neither more nor less.” And in “I Am The Walrus” John Lennon is asking ‘what is the meaning of meaning’? Ironically, Lewis Carroll’s Humpty Dumpty – who gets to decide what a word means whenever he uses it – crashes to the ground, breaking into pieces, just after Alice in Wonderland walks away.

The reference to Jack and Jill in “Dancing Shoes” is to the 17th century English nursery rhyme “Jack and Gill.” The rhyming of “water” with “after” is distinctive of the 17th century. Jill was originally spelled Gill in the earliest version of the rhyme and the accompanying woodcut showed two boys at the foot of the hill.

Jack and Gill went up the hill
To fetch a pail of water;
Jack fell down and broke his crown
And Gill came tumbling after. 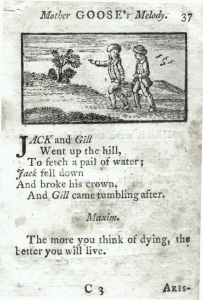 Later the spelling was changed to Jill and more verses were added to carry the story further, of which the commonest are:

Up Jack got and home did trot,
As fast as he could caper;
Went to bed to mend his head
With vinegar and brown paper.

Jill came in and she did grin
To see his paper plaster;
Mother, vex’d, did whip her next
For causing Jack’s disaster.

The liner notes for the Summer Holiday Soundtrack album featuring “Dancing Shoes” stated: “Not so very long ago, the India-born Mr. Richard was a modestly paid credit control clerk in a London television manufactory, operating under the real name of Harry Webb…. The fifties were drawing to a close and there seemed little in Harry Webb’s background to prepare him for any career beyond the world of white-collar and paper-clips. True, he had been a champion javelin-thrower in high school, and had appeared in a few amateur musical productions, but such attainments are not as readily negotiable as one might wish.” The notes chronicle the attention he gained as a skiffle performer, and getting to perform “Living Doll” for the Royal Family in 1959. The 1963 release of Summer Holiday, “caused riots at its premiere in Leicester Square…” in London.

He scored again in 1979 with “We Don’t Talk Anymore”. That same year he had a #4 hit in the UK, Ireland, New Zealand and South Africa with “Carrie”. And in 1980, Cliff Richard and Olivia Newton-John recorded “Suddenly”, a Top Ten hit in Ireland. At the end of the year Cliff Richard charted “Dreamin'”.

Richard’s next single was “A Little In Love”. In the fall of 1981 Cliff Richard had a Top Ten hit in Vancouver titled “Wired For Sound”. In 1982, he covered the 1961 doo-wop classic “Daddy’s Home” by Shep and the Limelights. The single was a Top Ten hit in Australia, Belgium, Ireland, New Zealand, and the UK.