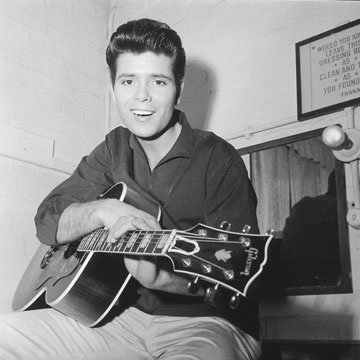 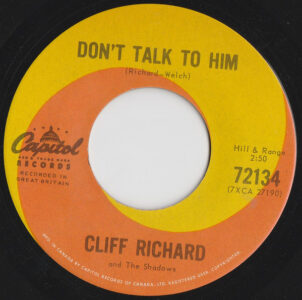 Released in November 1963, “Don’t Talk To Him” was written by Cliff Richard and Bruce Welch. Bruce Welch wrote a hit for Olivia Newton-John titled “Please Mr. Please”, which climbed into the Top Five in the USA and #1 in Canada in 1975. In 1989, Bruce Welch was a musical consultant for the Plymouth Theatre Royal production of Buddy – The Buddy Holly Story in London’s West End. In 1998 Welch produced Shadowmania, a one-day show comprising various Shadows tribute bands, with his own band, Bruce Welch’s Shadows, topping the bill. The event was so successful that it became an annual event Welch presented until 2012. In 2004 he was appointed to the OBE as an Officer of the Order of the British Empire.

“Don’t Talk To Him” is a song concerning a guy who is far away from his girlfriend. While he’s away, he warns his girlfriend not to talk to any other guy who badmouths him. For example, if some guy approaches her and tells her that her boyfriend has been “seen walking ’round with Sue and Jean,” understand that “he’s lying again.” Presumably, it’s a pretty easy lie to spot. We can safely assume that Sue and Jean are locals who the girlfriend would know. And if her boyfriend is on the other side of the country, or in a foreign land, it’s not plausible that he’d be in the neighborhood walking around with Sue and Jean. Though it’s not stated in the song, there may be a history the boyfriend has with the guy whose “lying again.” And it seems the guy whose lying is motivated to break up the relationship, and win the prize of the girlfriend.

The conversation the boyfriend is having with his girlfriend, about the possibility of another guy badmouthing him, is taking place before he goes somewhere that is “far away.” So, she’s being forewarned. Though, interestingly, it isn’t a specific guy, but “some guy.” So, maybe there is a culture in the town where badmouthing goes on behind others’ backs. Bottom line: “just think of me and count to ten” and you’ll remember how strong the bond of love is between us, says the boyfriend in “Don’t Talk To Him”.

In the late ’70s into the early ’80s he scored again with “We Don’t Talk Anymore” and “Dreamin’.” Other hits in the early ’80’s that did well in Vancouver were “A Little In Love” and “Wired For Sound”.

In 1982, he covered the 1961 doo-wop classic “Daddy’s Home” by Shep and the Limelights. The single was a Top Ten hit in Australia, Belgium, Ireland, New Zealand, and the UK.

One response to “Don’t Talk To Him by Cliff Richard”