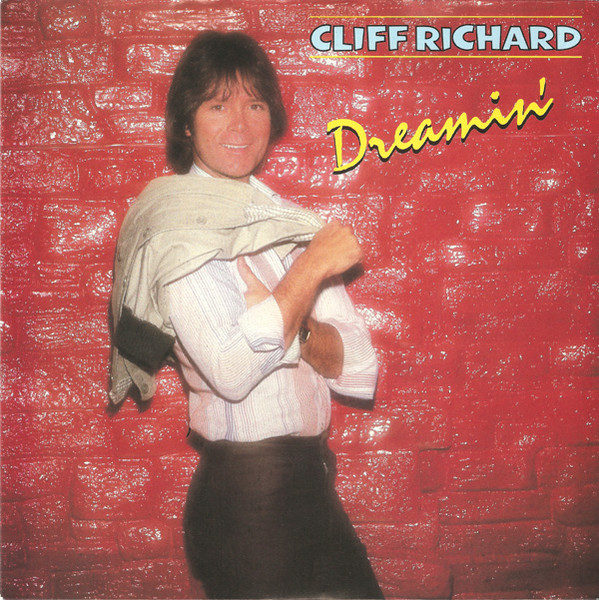 He scored again in 1979 with “We Don’t Talk Anymore”. That same year he had a #4 hit in the UK, Ireland, New Zealand and South Africa with “Carrie”. And in 1980, Cliff Richard and Olivia Newton-John recorded “Suddenly”, a Top Ten hit in Ireland. At the end of the year Cliff Richard charted “Dreamin'”. 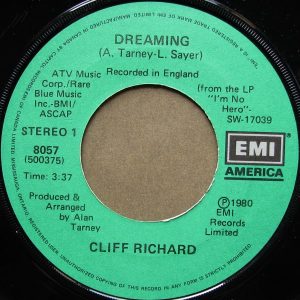 “Dreamin'” was cowritten by Alan Tarney and Leo Sayer. Alan Tarney was born in 1945 in Cumberland, England. Tarney moved to Australia in the mid-60’s and was in a psychedelic rock band called James Taylor Move. After that, Tarney was with the Kevin Peak Trio in 1968-69. He moved back to the UK in 1970. He joined a band called Quartet and into the 70’s was a session musician. From 1973-77 he was a member of the Shadows. In 1979 Tarney wrote and arranged Cliff Richard’s hit “We Don’t Talk Anymore”, which climbed to #1 in over ten nations, and the Top Ten in eight more. Tarney later produced “Dreaming”, “Wired For Sound”, “Some People” and “My Pretty One”, all Top Ten hits in the 1980’s for Cliff Richard. He also produced Leo Sayer’s hit single “More Than I Can Say”. For A-ha, Alan Tarney produced “Take On Me”, “The Sun Always Shines On TV”, “Train Of Thought”, “Hunting High And Low”, “I’ve Been Losing You”, “Stay on These Roads” and “Cry Wolf” – all Top Ten hits. Alan Tarney has been a session musician for Cilla Black, The Hollies, The Drifters, Bow Wow Wow, Olivia Newton-John, The New Seekers, Squeeze and others.

Gerald Hugh “Leo” Sayer was born in Sussex, England, in 1948. In 1973 his song “Giving It All Away” became a #5 hit in the UK for Roger Daltrey. In 1974 his song, “The Show Must Go On” peaked at #2 in the UK. It was covered successfully by Three Dog Night who had an international Top Ten hit with the tune. A number of Top Ten hits followed including “Long Tall Glasses (I Can Dance)”, “You Make Me Feel Like Dancing”, “When I Need You”, “How Much Love” and “More Than I Can Say”. In 2006, Leo Sayer had his eleventh Top Ten hit in the UK – his second at number-one – with “Thunder In My Heart Again”.

“Dreamin'” is a song about a guy who is trying to dream a woman into his life. She puts him down when he calls (it seems he calls at five o’clock in the morning). In any event, he’s obsessed with her and won’t stop until he makes his dream of the two of them being together come true.

Richard’s next single was “A Little In Love”. In the fall of 1981 Cliff Richard had a Top Ten hit in Vancouver titled “Wired For Sound”. In 1982, he covered the 1961 doo-wop classic “Daddy’s Home” by Shep and the Limelights. The single was a Top Ten hit in Australia, Belgium, Ireland, New Zealand, and the UK.