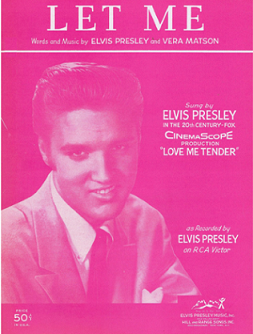 Elvis Aaron Presley was born on in a two-room house in Tupelo, Mississippi, on January 8, 1935. His twin brother, Jessie Garon Presley, was stillborn. When he was eleven years old his parents bought him a guitar at the Tupelo Hardware Store. As a result Elvis grew up as an only child. He and his parents, Vernon and Gladys, moved to Memphis, Tennessee, in 1948. The young Presley graduated from high school in 1953. That year he stopped by the Memphis Recording Service to record two songs, including “That’s When Your Heartaches Begin”. Elvis’ musical influences were the pop and country music of the time, the gospel music he heard in church and at the all-night gospel sings he frequently attended, and the black R&B he absorbed on historic Beale Street as a Memphis teenager. In 1954, Elvis began his singing career recording “That’s All Right” and “Blue Moon Of Kentucky” at Sun Records in Memphis.

In late 1955, his recording contract was sold to RCA Victor. In 1956 he had his first #1 record titled “Heartbreak Hotel.” He had a sound and style that uniquely combined his diverse musical influences and blurred and challenged the social and racial barriers of the time. Bill Haley & His Comets ushered in the rock ‘n roll into mainstream culture in 1955 when “Rock Around The Clock,” appeared in Blackboard Jungle – a film about juvenile delinquents and anti-social behavior in an inter-racial school. The song became an anthem for teenage rebellion.

However, it was Elvis in 1956 who ensured rock ‘n roll was here to stay with his swiveling hips and R&B infused songs with sexually suggestive lyrics. He had his first number one hit with “Heartbreak Hotel” in February 1956. He starred in 33 successful films, made history with his television appearances and specials, and knew great acclaim through his many, often record-breaking, live concert performances on tour and in Las Vegas. Globally, Elvis Presley has sold over one billion records, more than any other recording artist.

In 1956 Elvis Presley continued his chart-topping ways in Vancouver (BC) with “I Want You, I Need You, I Love You”, “Hound Dog”, “Don’t Be Cruel”, “Love Me Tender”, “Paralyzed” and “When My Blue Moon Turns To Gold Again”. Elvis’ eighth number-one hit on the Vancouver pop chart in 1956 was “Poor Boy”. 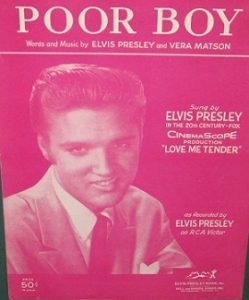 “Poor Boy” was cowritten by Elvis Presley and Vera Matson for the film Love Me Tender. It is a list-making song that details just how poverty-stricken the fellow is. Yet, his being in love is what really matters: “as long as I’ve got a dolly like you.” What he doesn’t have makes it clear that the dolly in his life isn’t looking for someone to take care of her financially. He doesn’t have a crust (of bread), a cent, “can’t buy a jug, can’t pay the rent.” He can’t buy a house, a lot, a bean, and he doesn’t have a pot (to cook beans in). He’s not ready to start farming either since he doesn’t have a pig, a cow, a horse or a plow. Poor as he is, he isn’t lonesome or blue. Instead, he has a heart of full of dreams.

Presley sings “Poor Boy” at a country fair where people are raising money to build a new school. A woman is putting out whole cakes beside a sign that reads “Prize cakes. Buy one for a good cause.” Others at the fair are square dancing.

The plot for Love Me Tender is set in 1865. It has Elvis playing Clint Reno, the youngest of the four Reno brothers. Clint stays home to take care of his mother and the family farm. His older brothers Vance, Brett and Ray fight in the American Civil War for the Confederate Army. The family is mistakenly informed that eldest brother Vance has been killed on the battlefield. After four years of war, the brothers return home and find that Vance’s former girlfriend Cathy has married Clint. Although Vance accepts this wholeheartedly (“We always wanted Cathy in the family”), the family has to struggle to reach stability with this issue. The subplot of unresolved passion carries the film. It is made clear from the outset upon the Reno brothers’ return home that Cathy still loves Vance, although she is true to the younger Clint. Honor prevails for Vance, but jealousy leads Clint into irrational rivalry for Cathy’s love.

In the film’s opening scenes, the three Reno brothers, serving as Confederate cavalrymen, attack a Union train carrying a federal payroll of $12,000, not knowing that the war had ended only a day before. The Confederates come to a decision to keep the money as spoils of war, an issue that will come back into the plot after the Reno brothers return home. A conflict of interest ensues when Vance tries to return the money against the wishes of some of his fellow Confederates, all of whom are being sought by the U.S. Government for robbery. The film reaches its tragic climax with Clint’s death during a final shootout over the money. Clint, seeing Vince with Cathy, shoots Vince (who lives). Immediately remorseful, Clint objects to the other ex-confederates who want to getaway with the $12,000. Clint is shot by one of the ex-Confederates and dies in Cathy’s arms. In the end, the money is returned and the Reno brothers are released. The other three ex-Confederates are arrested, and Clint is laid to rest at the family farm.

“Let Me” was cowritten by Elvis Presley and Vera Matson. The song appeared in the film Love Me Tender, released in November 1956. 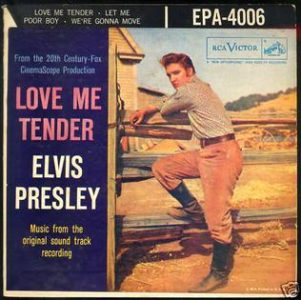 “Let Me” is a country-pop song about a guy who is walking on air whenever he dances with the girl he loves. What he wants her to do is to let him have another dance with her. When they dance, he gets excited feeling her arms. And when he sees her eyes of blue he gets drunk on love. Consequently, “I never hear the music play. I never see the crowd. Only you and me dancing on a cloud.”

“We’re Gonna Move” was cowritten by Elvis Presley and Vera Matson and featured in the film Love Me Tender. The song is credited with inspiring the Beatles to write “Fixing A Hole”, a track on the Sgt. Pepper’s Lonely Hearts Club Band album. “We’re Gonna Move” described a derelict run down home. It has “a hole in the roof where the rain pours in, a hole in the floor where it drops right out again.” There are cracks in the ceiling, and holes in the walls. The windows have no panes, and the stove had no chimney. With everything falling apart, the occupant declares “we’re gonna move to a better home.”

Elvis started off 1957 topping the Vancouver pop charts with “Too Much”, “Playing For Keeps”, “All Shook Up”, “(Let Me Be Your) Teddy Bear”, “Mean Woman Blues”, “Jailhouse Rock” and “(You’re So Square) Baby I Don’t Care” peaking at #1. During this chart-topping streak, one of Presley’s Top Ten hits in Vancouver was “(There’ll Be) Peace In The Valley“. Another was “Treat Me Nice”. His second film, Loving You, was released in 1957. Though it was not featured the film, the song “Have I Told You Lately That I Love You?” made it onto the Loving You Soundtrack album.

Elvis kept on topping the charts into 1958 with “I Beg Of You”, “Don’t”, “Wear Your Ring Around My Neck”, “Hard Headed Woman”, “King Creole”, “I Got Stung” and “One Night”. He also starred in several films. But during his chart-topping ways, he got a letter from Uncle Sam. Sergeant Elvis Presley served with the U.S. Army from March 24, 1958, to March 2, 1960. Meanwhile, Presley managed to climb to the top of the charts once in 1959 with “Big Hunk o’ Love”.

His return to civilian life saw a return to a string of successful single, album and film releases. In April 1960 Elvis topped the Billboard Hot 100 with “Stuck On You. His followup, “It’s Now Or Never”, also topped the pop charts in August 1960, including in Vancouver. The B-side, “A Mess Of Blues”, also charted on CKWX as a double-sided number-one hit.

In November 1960, Elvis was back at number-one with “Are You Lonesome Tonight?”. His chart-topping ways continued in March 1961 with “Surrender”. The album from his first film on return from serving in Germany, G.I. Blues, was a best-seller at the box office (#2 on Variety Magazine for the year 1960) and a number one album in October 1960. He released His Hand In Mine, a collection of sacred gospel music and in November, 1960, began to record his 6th studio album, Something For Everybody. It went on to become his 13th hit album.

In September 1961, in Vancouver Presley topped the charts with “Marie’s The Name (His Latest Flame)” and “Little Sister”. Late in the fall the King of Rock n’ Roll had another Top Ten hit titled “Can’t Help Falling In Love”. The song was from the soundtrack from the film Blue Hawaii. The title track charted on the record surveys on Top40 radio in Vancouver in the winter of 1961.

In 1962 Presley released his seventh studio album, Potluck. From that album the song “Kiss Me Quick” would peak at #34 on the Billboard Hot 100 in 1964. But his song, “Suspicion”, climbed onto the CFUN chart in the summer of 1962. Also in 1962 Elvis was filming a number of movies. The first to be released in the summer of ’62 was Kid Galahad, which included the song “King Of The Whole Wide World”. Presley also enjoyed hit singles with “Good Luck Charm” and “She’s Not You”.

Elvis continued to enjoy more Top Ten hits between 1963 and 1965. His most notable hits were “One Broken Heart For Sale”, “(You’re The) Devil In Disguise”, “Witchcraft”, “Bossa Nova Baby”, “Such A Night”, “Ain’t That Loving You Baby”, “Crying In The Chapel” and “Puppet On A String“.

In 2022 a film about Presley, as seen through the narrative view of Col. Tom Parker, was released titled Elvis. Presley was played by Austin Butler.