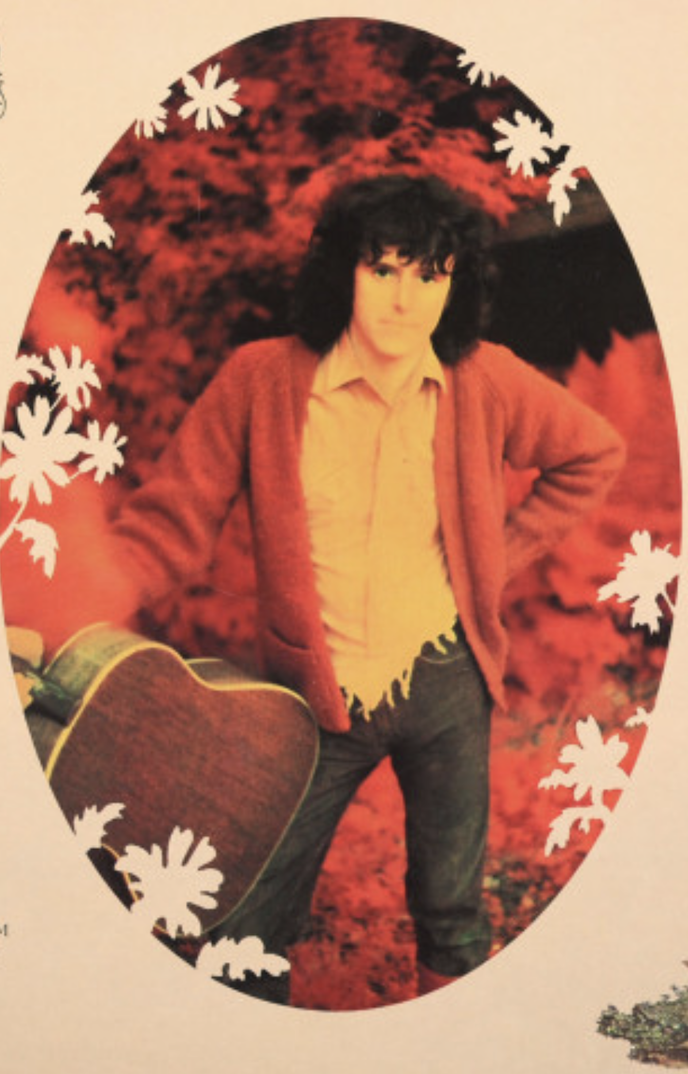 #122: To Susan On The West Coast Waiting by Donovan

Donovan Phillips Leitch was born in Glasgow, Scotland, in 1946. As a child he contracted polio and was left with a limp. At the age of 14 he began to play the guitar and when he was 16 years old he set his artistic vision to bring poetry to popular culture. He began busking and learned traditional folk and blues guitar. Music critics began branding him as mimicking Bob Dylan’s folk style. Like Dylan, Donovan wore a leather jacket, the fisherman’s cap, had a harmonica cradle and a song with “Wind” in the title. Dylan wrote “Blowing In The Wind” and Donovan had a hit in 1965 titled “Catch The Wind”.  Donovan was nicknamed by music critics in the UK as the “British Dylan.”

In 1965 Bob Dylan flew to London for a concert tour of England in from April 28,  to May 10, 1965. In a 1967 documentary titled Don’t Look Back, by D. A Pennebaker, Donovan appears with Dylan. In a concert performance of “Talkin’ World War Three Blues,” Dylan sings, “I looked in the closet – and there was Donovan.” During the film Dylan and Donovan each play some songs at a hotel party with a concert poster in the background headlined by Donovan, Unit Four Plus 2 and Wayne Fontana and Mindbenders. Dylan patronizes Donovan, while Donovan suggests “I can help you, man.” However, in the by the release of his second studio album, Fairytale, Donovan was forging new musical territory. “Sunny Goodge Street” featured some jazz elements and psychedelia.  And Dylan bid farewell to acoustic guitar and picked up an electric guitar.

In his autobiography, Donovan recalls how his father, a tool-setter in the Rolls-Royce factory in Glasgow, used to cradle him in his arms and read him poetry: Robert Service’s poems of the Klondike, Wordsworth, Coleridge, Byron, Shelley, Blake, Yeats and the works of the “super-tramp,” WH Davies. This had a powerful effect on Donovan, “What my father read me was to do with very powerful social change. There have been many bohemias in the history of man, and one was the radicalism of the 1800s, which my father read me poems from. And I was fired with it, until the actual intention to be a voice, to feel I was a voice, to actually be a voice for a generation was a very easy thing. I knew that I was part of it. I’m in service. Poets are. I am in service to the trade.”

At the age of 19, Donovan quickly rose to fame in the United Kingdom in early 1965 with a series of live performances on the pop TV series, Ready, Steady, Go!  In the winter of 1965-66, Donovan’s  third album, Sunshine Superman, was mired in a legal dispute with Pye Records for over five months. When it was released in the summer of 1966 the title track drew from folk, jazz, pop, psychedelia and calypso. “Sunshine Superman” shot to #1 on Vancouver’s CKLG on August 27, 1966. The song, with it’s references to Superman and the Green Lantern, charted a new course in pop art. Donovan was listening to his own muse and music critics let go of the “British Bob Dylan” label. That same year Donovan provided the line “sky of blue and sea of green” in the Beatles song, “Yellow Submarine.” Donovan’s close association and friendship with the Beatles is seen in an unrecorded final verse of Donovan’s 1968 single, “Hurdy Gurdy Man”. George Harrison penned a final verse: “When the truth gets buried deep, beneath a thousand years of sleep, time demands a turn around, and once again the truth is found.” Donovan would later sing the Harrison  verse in two of his live albums, Live in Japan: Spring Tour 1973 and Rising (1990).

On Donovan’s official website it is stated, with reference to his early 1968 trip with the Beatles and others to the ashram of ashram of Maharishi Mahesh Yogi in India: “It is now history that Donovan became the tutor of The Beatles on the famous trip to India, where he taught John, Paul and George the finger style guitar and many of his unique chord patterns, that would create many of the best songs and styles of The White Album. Most notable Dear Prudence, Julia (which John asked Donovan to help him write), Blackbird, While My Guitar Gently Weeps, and many others on The White Album.”

Donovan charted “Hurdy Gurdy Man” to #1 in 1968. His next number-one hit in Vancouver was the double-sided “Atlantis”/”To Susan On The West Coast Waiting” in the winter of 1968-69. 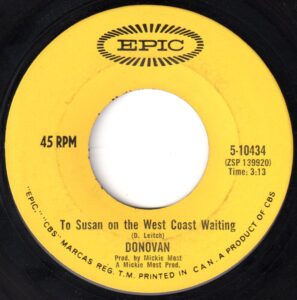 “To Susan On The West Coast Waiting” was the B-side to “Atlantis”, which climbed to #7 on the Billboard Hot 100. But “To Susan On The West Coast Waiting” was a gentle anti-Vietnam War song: “Our fathers have painfully lost their way, that’s why I’m here today. Hear me when I say there will come a day, when kings will know and love can grow.” For political leaders, and those supporting newly elected President Richard Nixon, this was a fight against the advance of communism. It was a war to retaliate against Vietnamese alleged (and since disproven) aggression in the Gulf of Tonkin in 1965. Consequently, it didn’t get much airplay in over half the states in the USA.

In “To Susan On The West Coast Waiting” Andy is a soldier in the United States Army. He lets Susan know that he misses her terribly. He’d be with her, except for the Vietnam War: “You know I’d be there working at my craft, had it not been for the draft.” By 1969, the Vietnam War was 14 years old and US involvement had ramped up from an initial thousand personnel in the late 50s to the end of 1963, to over half a million in 1968. President Lyndon Johnson’s unpopular policies led him to not seek re-election in 1968. The Democratic Party convention in Chicago in August 1968 ended with riots and a party deeply torn by pro-war and anti-war factions. The Vietnam War was called “The Living Room War” because, for the first time, families could sit down and watch footage of the war showing events almost as they were happening.

“To Susan On The West Coast Waiting” was one of a number of songs with an anti-war message. Others included “Unknown Soldier” by The Doors, “Echo Park” by Keith Barbour, “Simple Song Of Freedom” by Tim Hardin, “Fly Little White Dove Fly” by the Bells, “Shapes Of Things” by the Yardbirds, “Brainwashed” by David Clayton-Thomas & the Bossmen, “American Woman” by the Guess Who, “Fortunate Son” by Creedence Clearwater Revival, “Gimme Shelter” by the Rolling Stones, “Give Peace A Chance” by the Plastic Ono Band, “Lay Down (Candles In The Rain)” by Melanie, “Ohio” by CSNY, “One Tin Soldier” by the Original Caste, “Question” by the Moody Blues, “Sky Pilot” by Eric Burdon & the Animals, “Sweet Cherry Wine” by Tommy James and the Shondells, “Woodstock” by Joni Mitchell (and Matthews Southern Comfort, CSNY), and many others.

In Vancouver, “Riki Tiki Tavi” was his last charting single, climbing to #9 on the CKVN charts in 1970. In 1971 he starred as the Pied Piper and wrote the music for the British film, The Pied Piper. In 1972 Donovan wrote the score for the Zefferelli film Brother Sun, Sister Moon. Over the course of his career Donovan has released 26 albums, though his tenth in 1973, Cosmic Wheels, was his last album to reach the Top 40. He appeared in the 1978 comedy musical film Sgt. Pepper’s Lonely Hearts Club Band. In 2005 he released his autobiography, The Hurdy Gurdy Man.

On Donovan’s official website, the singer-songwriter summarizes the acclaim he has received over the decades: “Donovan in his songs of innocence, has been compared to Blake, his metaphysical songs to Donne and Herbert, his Celtic songs to Yeats, his children’s songs to Stevenson, his Nonesense songs to Carroll and Lear, his Yoga songs to the Vedic Hymns, his Jazz Classical compositions to Ellington and Lewis, his poetic public appeal to Auden. He also is attributed with writing the first ‘Green Songs’ highlighting the threat to the Ecosystem of our Planet Earth.” When he became an inductee to the Rock and Roll Hall of Fame, it was said of him, “Donovan singlehandedly initiated the psychedelic revolution with his album Sunshine Superman.”