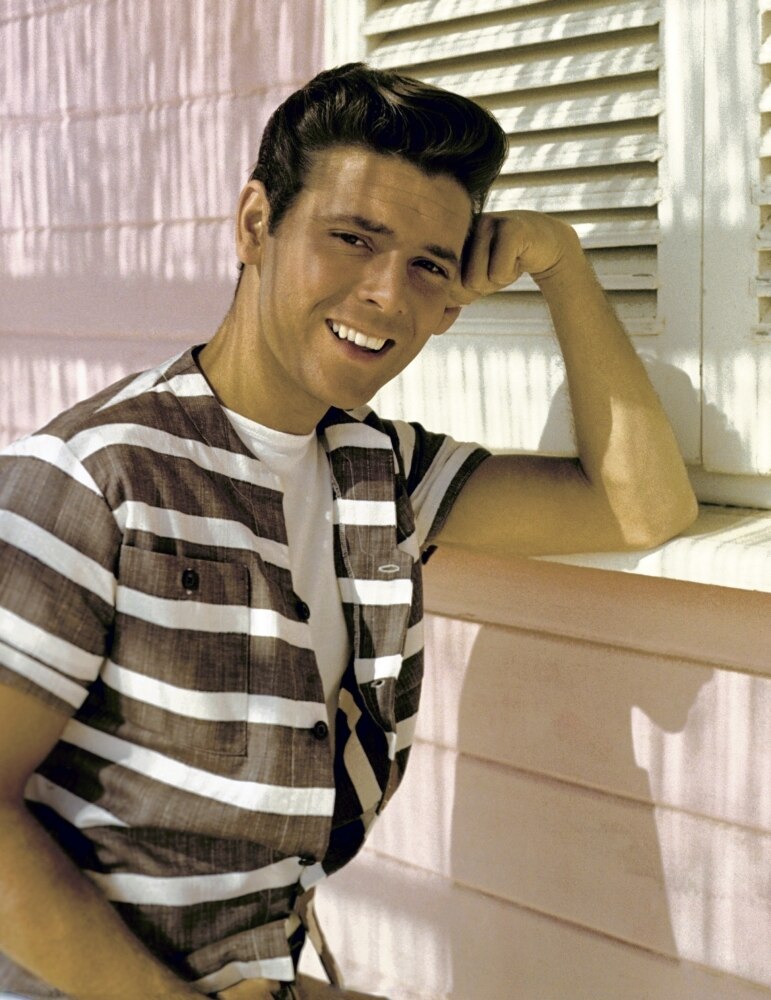 And a year later Cliff Richard was roaring up the C-FUNTASTIC FIFTY in early spring 1963 with “Bachelor Boy”. 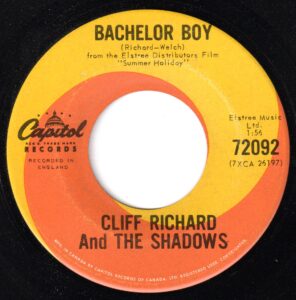 “Bachelor Boy” was cowritten by Cliff Richard and Bruce Welch, a member of his backing band the Shadows. Welch was born Bruce Cripps in 1941, Sussex, UK. He studied guitar and vocals and later became a composer and producer. He chose the name Bruce Welch as a stage name and became a guitarist with Cliff Ricard’s backing band, The Shadows. Over his career he has written and arranged over 900 songs. These include other Cliff Richard hits “Summer Holiday” and “On The Beach“. He also wrote “If Not For You” and “Please Mr. Please”, both hits for Olivia Newton-John and Roger Whitaker’s 1986 album, The Genius Of Love. In 2004, Welch also received an OBE (Order of the British Empire).

“Bachelor Boy” is a song about advise a father gives to his son, telling him he’ll be a bachelor all of his life. As the boy gets older he falls in love at the age of sixteen. But his father’s words still ring in his ear. Into adulthood the son starts to think he’ll get married to a woman and they’ll have a child. But, in the meantime, he’ll keep up his carefree ways as a bachelor.

In the 12th Century the Old French bacheler was derived from Latin baculum (a stick) in reference to the wooden sticks used by knights in training. In the 12th Century a “knight bachelor” in England was a knight who was either too young, or too poor, to have other knights at his command. By the 14th Century a bachelor was used in reference to a junior member of a guild or university. In time, those seeking to attain their first degree in university worked to earn a Bachelor’s Degree. This was first granted by the University of Paris in the 13th Century. In the 17th Century, in some parts of Germany, men who were still unmarried by their 30th birthday were made to sweep the stairs of the town hall until kissed by a “virgin.” During the Victorian era men who were considered an “eligible bachelor” were deemed to be a desirable potential husband due to their social status, wealth, or other qualities such as athletic achievements.

In the 1950s persons who were regarded as a “confirmed bachelor” were suspected of being a “homosexual.” At least this was the case in North America. There may have been a different assumption about someone being “a bachelor boy until your dying day” in England. Did people hearing “Bachelor Boy” in 1963 think the father suspected his son was “gay?” Not likely. Did the father want to warn his son that getting married was a trap, and that men who were single had a better horizon ahead of them? But then again, the song was not a hit at all in the United States. Plausibly, some American DJs upon hearing the lyrics of “Bachelor Boy” associated the father’s advice to the son as a tale about someone destined to be a “confirmed bachelor,” in other words “a Nancy boy, a fruitcake,” to use the slang of the time.

In more recent decades almost half of the adult population in Canada are single. So it is as common for almost as many men to be unmarried as to be married. A recent study reports these findings about single men:

The term “bachelor” is still used, and since 2002 The Bachelor has been a dating game show on ABC. The series revolves around a single bachelor who begins with a pool of romantic interests from whom he is expected to select a wife. The contestants in the show travel with the bachelor to romantic and exotic locations for their dates.

“Bachelor Boy” climbed to #1 in Toronto and Ottawa (ON), #2 in Peterborough (ON), and #4 in Vancouver, spending six weeks in the Top Ten on CFUN.

From March 1963 to May 1966 Cliff Richard had 15 hit singles in the Top 20 on CFUN. Of these 12 made the Top Ten and three peaked at #1. After “Bachelor Boy”, Richard’s sixth Top Ten charting song in Vancouver was “Summer Holiday”, in May ’63. The songs overlapped with “Summer Holiday” entering the Top Ten on the C-FUNTASTIC FIFTY on April 27th at #10, while “Bachelor Boy” peaked at #5 that week. And with “Bachelor Boy”, Cliff Richard began charting for 81 of 85 consecutive weeks on the CFUNTASTIC FIFTY between March 9, 1963, and October 17, 1964.

Of the next eight singles after “It’ll Be Me”, seven made the Top Ten in Vancouver. Among these were “Constantly [L’Edera]“/”True True Lovin'”, “I’m The Lonely One“. The last of Cliff Richard’s eight consecutive Top ten hits in Vancouver was in the fall of 1964 with “On The Beach”. He also had a Top Ten hit in Vancouver in 1965 with “Just Another Guy“, while the B-side “The Minute You’re Gone” stalled at #11. Then in 1966 Richard was back in the Top Ten with a cover of the Rolling Stones “Blue Turns To Grey“. While “I Don’t Wanna Love You” stalled at #14 in 1965.

In the late ’70s into the early ’80s he scored again with “We Don’t Talk Anymore” and “Dreamin’.” A third hit in the early ’80’s did well in Vancouver titled “Wired For Sound”.