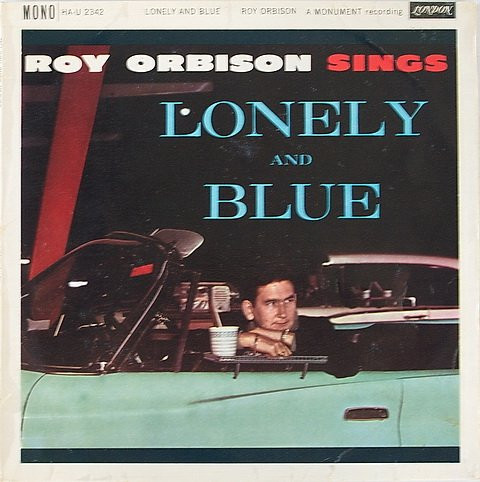 With the advent of Rock and Roll, the Wink Westerners renamed themselves The Teen Kings. In addition to the TV show on KMID, TV station KOSA in Odessa, Texas, gave them a half hour slot on Saturday afternoons. The CBS affiliate also had Johnny Cash and Elvis Presley guest star on Roy Orbison’s KOSA TV show. Johnny Cash got Orbison in touch with Sam Phillips of Sun Records in Memphis. Orbison called Phillips who hung up the phone saying, “Johnny Cash doesn’t run my record company.” Orbison and the Teen Kings began to perform “Ooby Dooby” at gigs around Texas.

Orbison sent the demo of “Ooby Dooby” in late 1955 to Columbia Records, but they weren’t interested. So Orbison offered but the song to a Denton band called Sid King and the Five Strings. They recorded “Ooby Dooby” on March 5, 1956, at a studio in Dallas. Then Orbison got a break and recorded the song at Sun Records later that month.

Orbison had been approached by owners of Je-Wel Records who wanted The Teen Kings to make a record. The session took place in early March, 1956. This time, Roy and The Teen Kings, recorded The Clover’s “Trying to Get to You” along with “Ooby Dooby”. The single was released March 19, 1956. That same day, Orbison took a copy to Cecil “Poppa” Hollifield in Odessa. He was a well-know record dealer in West Texas. “Poppa” Hollifield liked the record and played it on the phone to one of his connections in Memphis. The guy on the other side of the line asked him to send him a copy. His name was Sam Phillips, owner of Sun Records. A few days later “Poppa” telephoned Roy to say that Phillips wanted the Teen Kings in Memphis in three days to record for Sun Records.

Roy Orbison and the Teen Kings arrived in Memphis on Monday, March 26, 1956. The next day they re-recorded “Ooby Dooby”. But the band’s follow-up singles failed to chart. The Teen Kings split up in December 1956 and Orbison stayed at Sun until 1958, with all six followup singles commercial flops.

By the fall of 1959 Orbison got a new record contract with Monument Records. They released “Uptown” which had strings as opposed to fiddles, which were not very common in Nashville. It was Orbison’s biggest hit since “Ooby Dooby”. But his next release was a smash hit. “Only The Lonely” Climbed to #2 on the Billboard Hot 100, #2 in Vancouver and #1 in the UK. His follow-up single was “Blue Angel”. 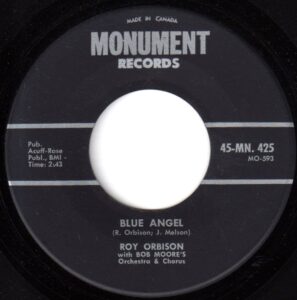 “Blue Angel” was cowritten by Roy Orbison and Joe Melson. In 1935, Joe Melson was born, and was raised on a farm in northeast Texas. In his late teens Joe was lead guitarist and lead vocalist for a rockabilly band called The Cavaliers. Melson and Orbison met in Midland, Texas, in 1959. Roy Orbison and Joe Melson co-wrote Orbison’s hits “Only The Lonely”, “Blue Angel”, “I’m Hurting’”, “Running Scared”, “Crying”, “The Crowd”, “The Actress”, “Leah”, “Lana” and “Blue Bayou”. They duo co-wrote “Memories Of Maria” which was recorded by Hawaiian guitar player Jerry Byrd. They also wrote “Come Back To Me My Love” for Roy Orbison, which became a minor hit for Mark Dinning.

Joe Melson also recorded seven singles with Hickory Records between 1960 and 1963. He switched labels to EMP there he released two more singles in 1965. Though some of these discs got a spin by a few DJ’s across the USA, none of them were commercially successful. Over the past five decades Joe Melson has appeared in concert at rockabilly and nostalgia festivals. In 2002 Melson was inducted into the International Rock-A-Billy Hall of Fame. Melson’s most recent single release was in 2014 with Australian recording artist Damien Leith.

Blue Angel” is a song about a female whose man in her life “said goodbye.” She’s learning that “love’s precious flame can burn in vain.” It also seems she wasn’t keeping her eye on the prize, as she “thought love was a game.” However, there is another male friend in her life whose watched her relationship unravel. He steps up and tells her if she goes steady with him “I’ll never say goodbye….If you just say your mine, I’ll love you ’til the end of time….I’ll lever let you down. I’ll always be around.”

In the early rock era there were plenty of songs with the word “angel” in song titles and song lyrics. This includes “Angel Baby” by Rosie and the Originals, “Fools Rush In (where Angels Fear to Tread)” by Brook Benton, “Devil Or Angel” by Bobby Vee, “Teen Angel” by Mark Dinning, “Pretty Little Angel Eyes” by Curtis Lee, “Johnny Angel” by Shelley Fabares, “Rockin’ Little Angel” by Ray Smith, “Letter To An Angel” by Jimmy Clanton, “Earth Angel” by the Penguins, and “My Special Angel” by Bobby Helms.

Other singles with nonsense lyrics from the early rock era include:

The hits kept on coming for Roy Orbison with “Love Hurts“, “Crying”, “Dream Baby”, “In Dreams”, “Candy Man” and many other Top 40 singles. Among these was “The Actress”.

In June 1966, Orbison’s wife, Claudette, was killed in a motorcycle accident in Tennessee. Orbison had released ten singles since “Oh Pretty Woman” topped the pop charts. But only two of these had cracked the Top 30 of the Billboard Hot 100, with “Goodnight” charting best to peak at #21. His final single release in 1966 was “Communication Breakdown”. In 1968, tragedy struck again when two of his three children died in a fire that burned down his house in Hendersonville, Tennessee.

A duet of “Crying” with k.d. Lang climbed to #2 nationally on the RPM Canadian singles chart, though only to #35 on CKLG in February 1988. Orbison won a Grammy Award for the duet. Next, Orbison sang with George Harrison, Jeff Lynne, Tom Petty and Bob Dylan, in a group called the Traveling Wilburys. Their single, “Handle With Care”, climbed to #9 in Vancouver and #45 on the Billboard Hot 100. Roy Orbison died dead at 52 from a heart attack on December 6, 1988. Two days prior, he gave his last interview and discussed the buzz at the time that Martin Sheen might play Orbison in a biopic about his life. In April, 1989, Roy Orbison’s posthumous single, “You Got It”, climbed to #6 on CKLG in Vancouver.