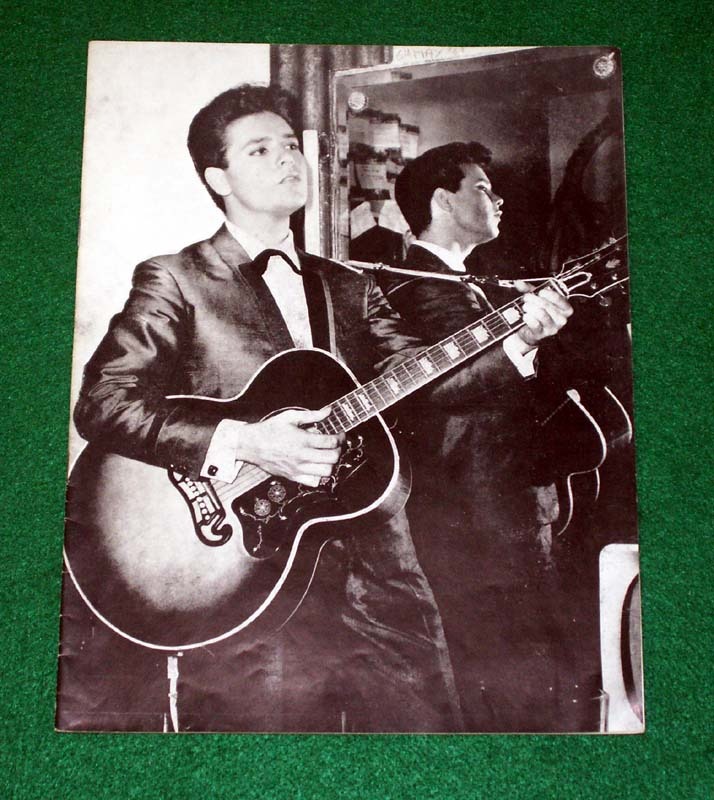 Cliff Richard had his first single on the Vancouver charts peak at number one in the fall of 1959. “Living Doll” became an auspicious beginning for a recording artist. Fans in Vancouver were wild about Richards. He had a string of hits between 1959 and 1966, and again in the late 70s onward. Of 26 singles that charted on the Vancouver pop charts, only two didn’t climb into the Top 20. His second number-one hit in Vancouver was “‘D’ In Love” in March 1961. 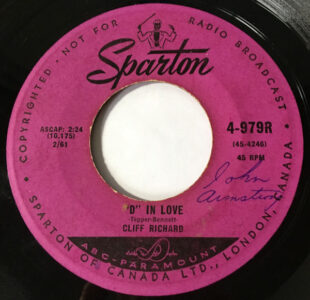 “‘D’ In Love” was cowritten by Roy C. Bennett and Sid Tepper. Bennett was born in Brooklyn, New York, in 1918 with the birth name Israel Brodsky. His family were recently arrived Eastern European immigrants. While he was a child he met Sid Tepper, who was also born in 1918, but in New York City. They began writing songs from the age of eleven. They both were drafted into the U.S. Army in World War II. In 1945 they began to publish songs in the Brill Building on Broadway.

When they were in their twenties, Bennett and Tepper got their first big break with “Red Roses For A Blue Lady”, a #4 hit for Vaughan Monroe in 1949. They co-wrote “Suzy Snowflake” for Rosemary Clooney who had a Christmas hit with the tune in 1951. The Ames Brothers had a hit by this songwriting team in 1954 that climbed to #3 titled “The Naughty Lady Of Shady Lane”.

In 1955, Bennett and Tepper wrote “Nuttin’ for Christmas”, a #6 hit for Art Mooney and His Orchestra, featuring six-year-old Barry Gordon. Then in 1958 Tepper and Bennett scored a #6 hit for Perry Como titled “Kewpie Doll”. In 1960 they wrote “(There’s A Little Song A-Singing) In My Heart” for Carl Dobkins Jr. Tepper and Bennett wrote five songs for the Elvis Presley film and soundtrack of Blue Hawaii. They wrote 37 other songs that Elvis recorded including “G.I. Blues” and “Puppet On A String”. They also penned the only Presley song nominated for an Oscar, “It’s a Wonderful World” (which was in Roustabout). Other recording artists who recorded Tepper and Bennett tunes include Jo Stafford, Dean Martin, Wayne Newton, Eartha Kitt, Dave Brubeck, Gogi Grant, Carl Perkins, Jim Reeves, Connie Francis, Joanie Sommers, Conway Twitty, Helen Shapiro, Jerry Keller, and The Searchers.

“‘D’ In Love” was a song about someone who is very good at academics in school. They get “A” in Biology and Psychology. In social studies, they can name every United States president. However, when it comes to making love they get “D”. They are clumsy when it comes to giving hugs, and when it comes to kissing, they need a lot more practice. Consequently, their patient date suggests “lots and lots and lots and lots of homework with me.” The warning for listeners was that just because someone has a high IQ doesn’t make them an ace in the sack.

Cliff Richard’s hits in Vancouver in 1964 included “Don’t Talk To Him”, peaking at #4 in January. Next up was “I’m The Lonely One“, followed by “Constantly” and “On The Beach”. He also had a Top Ten hit in Vancouver in 1966 with a cover of the Rolling Stones “Blue Turns To Grey“.

In the late ’70s into the early ’80s he scored again with “We Don’t Talk Anymore” and “Dreamin’.” A third hit in 1981 did well in Vancouver titled “A Little In Love“, followed “Wired For Sound“.

Cliff Richard was among the performers at the Diamond Jubilee concert held outside Buckingham Palace in June 2012. Then, on June 30, 2012, he helped to carry the Olympic torch from Derby to Birmingham as part of the torch relay for the 2012 Summer Olympics in London. Cliff Richard has also been active as a philanthropist. In October 2015 he went on tour at the age of 75. Over the course of his recording career, Cliff Richard has had 68 singles reach the Top Ten on the UK singles chart between 1958 and 2008. In late June and early July, 2019, Cliff Richard celebrated his 60th year as a recording artist with his Diamond Encore Tour. He performed in the village of Cartmel in Cumbria, just south of Scotland. He gave a concert in Scarborough by the North Sea, and in Greenwich, London.