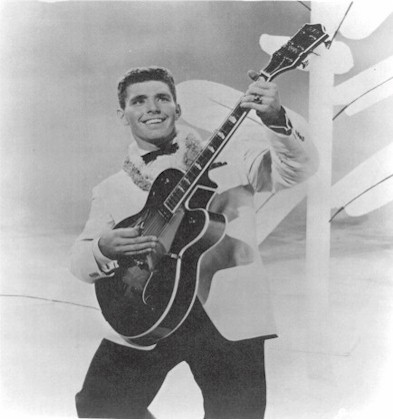 Buddy Wayne Knox was born in 1933 Happy, Texas, a small farm town in the Texas Panhandle a half hour south of Amarillo. During his youth he learned to play the guitar. He was the first artist of the rock era to write and perform his own number one hit song, “Party Doll”. The song earned Knox a gold record in 1957 and was certified a million seller. Knox was one of the innovators of the southwestern style of rockabilly that became known as “Tex-Mex” music.

From that one session Buddy Knox would receive two gold records in 1957, one for “Party Doll” and the other for a song that Jimmy Bowen sang and co-wrote with Knox called “I’m Sticking With You.” “We didn’t know what we had just done,” Knox recalls, ” All we wanted to do was record our music and sell it around the college. This was just a fun trip for us.” “Party Doll” climbed to #1 in Vancouver (BC) and spent 12 weeks in the Top Ten. He had another #1 hit in Vancouver in June ’57 with “Rock Your Little Baby To Sleep”. In July ’57 Knox had another Top Ten hit on Red Robinson’s Teen Canteen chart with a track from his self-titled debut album, Buddy Knox, “Rock House”. 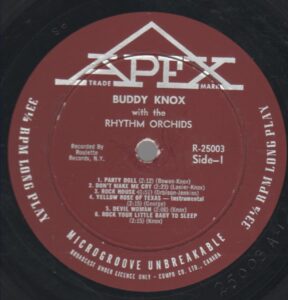 “Rock House” was cowritten by Roy Orbison and Harold Lloyd Jenkins. Orbison had his first hit single on the Billboard pop chart in 1956 with “Ooby Dooby”. Jenkins adapted the stage name of Conway Twitty after he cowrote “Rock House”. And in 1958, billed as Conway Twitty, he had a number one hit with “It’s Only Make Believe”.

Harold Lloyd Jenkins on September 1, 1933 in rural Friars Point, Mississippi, the boy had uncommon abilities and a penchant for helping those around him. Given his first guitar, a Sears & Roebuck acoustic, at the age of four, Harold demonstrated a musical gift. He formed his first band, the Phillips County Ramblers when he was 10 after the family had moved to Helena, Arkansas. His mother was the breadwinner and his father found spotty work as a Mississippi riverboat pilot. Harold obtained employment as a carhop and used his earnings to buy clothes and shoes for his brother and sister.

He landed a weekly radio show, and in his other passion, baseball, developed his skills to the point of playing semi-pro and being offered a contract by the Philadelphia Phillies after high school. Jenkins figured his destiny was decided when he was drafted by the Philadelphia Phillies. Fate intervened, however, when he was drafted by a much bigger team — the U.S. Army. While stationed in Japan, he kept both his dreams alive by forming a band and playing on the local Army baseball team. The band was called the “Cimmarons” and played at different clubs. After his release from the army it was the mid 1950s and the sudden popularity of a young man named Elvis Presley drew a still very young Harold Jenkins to Memphis. Among Conway Twitty’s other hits were “Lonely Blue Boy” and “Danny Boy”. Twitty went on to become a huge country & western star in the 1970s.

He had one notable minor hit with “Ooby Dooby” in 1956. But in 1960 he finally made the Top Ten in the USA with “Only The Lonely”. His follow-up single, “Blue Angel”, gave Orbison his first #1 hit in Vancouver, while peaking at #9 in the USA and #11 in the UK. Orbison had another #1 hit in April 1961 here in Vancouver and in the USA with “Running Scared”. The song debuted at #11 on CKWX and #9 on CFUN. It climbed to #1 on April 15, 1961, on CKWX topping the charts for three weeks. The songs’ production and the performance were unusual for the time, as Monument Records was willing to spend more money on production than many other record labels.

The hits kept on coming for Roy Orbison with “Love Hurts“, “Crying”, “Dream Baby”, “In Dreams”, “Candy Man” and many other Top 40 singles. Among these was “The Actress”. In 1964, Roy Orbison topped the charts in the USA and Vancouver with “Oh, Pretty Woman”. He also had a Top Ten hit with “It’s Over” in the spring of ’64. He went on to become a member of the Traveling Wilburys in the late 80s who had a modest hit with “Handle With Care“.

“Rock House” is a celebration of a place to hear music and dance called the Rock House. It’s a place you can go to in the morning, all day long and in the evening too. When you get there you’ll see a “blue light” and a “big crowd” where the “jukebox plays loud.” The place is jumping and promises “no trouble, no blues.” The invitation, far from causing anyone a heartache, is to “rock it up and have a ball.” In the songs’ lyrics the work rock (or rockin’) appears fifteen times. The track “Rock House” peaked at #2 on Red Robinson’s Teen Canteen chart on CKWX in July 1957. But as it wasn’t released as a single, it didn’t happen to chart on other record surveys across Canada or America.

In 1955 Bill Haley and His Comets had a huge hit that eventually sold 25 million records titled “Rock Around The Clock”. And in 1957 Elvis Presley had a number one hit with “Jailhouse Rock”. And in 1958 Chuck Berry landed at Top Ten hit with “Rock And Roll Music”. Orbison and Jenkins had a musical hunch that a song title that included the word “rock”, held a lot of appeal. After all, Elvis and the other rockers were elbowing more traditional pop stars like Georgia Gibbs, Julius La Rosa, Don Cherry, the Four Lads, the Chordettes, Patti Page, June Valli and others out of the top spots on the pop charts.

Not only did the songwriters of “Rock House” end up becoming big rock stars, Buddy Knox became a household name. On October 23, 1957, Buddy Knox appeared in concert at the Georgia Auditorium in Vancouver, along with Buddy Holly and The Crickets, Eddie Cochran and Frankie Lymon and the Teenagers.

In the early 1960s Knox signed with Liberty Records. With this change Knox released several more mainstream pop records, featuring string arrangements and backing vocalists at the suggestion of producer Tommy “Snuff” Garrett. “Lovey Dovey” and “Ling-Ting-Tong” were the only ones that got much airplay.

Both “Lovey Dovey” and “Ling Ting Tong” were much bigger hits in Vancouver than in America, peaking in the Top Ten. The sound captured on these recordings was a distinct departure from his earlier rockabilly work for Roulette. Knox’s recordings now sounded more similar to other mainstream pop artists of the time, like Johnny Burnette (“You’re Sixteen”) and Bobby Vee (“Rubber Ball”), especially with the introduction of strings.

In May 1969, Buddy Knox appeared at Langley Speedway in the Fraser Valley. Knox was called upon to pass out trophies to winners of each race. Between 1968 and the mid-70’s Knox was involved in several business ventures in Canada. Canadian folksinger Gordon Lightfoot, and Knox, teamed up and became owners of a chain of Canadian nightclubs. During this time Buddy Knox moved to Winnipeg, Manitoba, Canada. On September 22, 1980, Buddy Knox performed in concert at The Cave in Vancouver.

One response to “Rock House by Buddy Knox & the Rhythm Orchids”